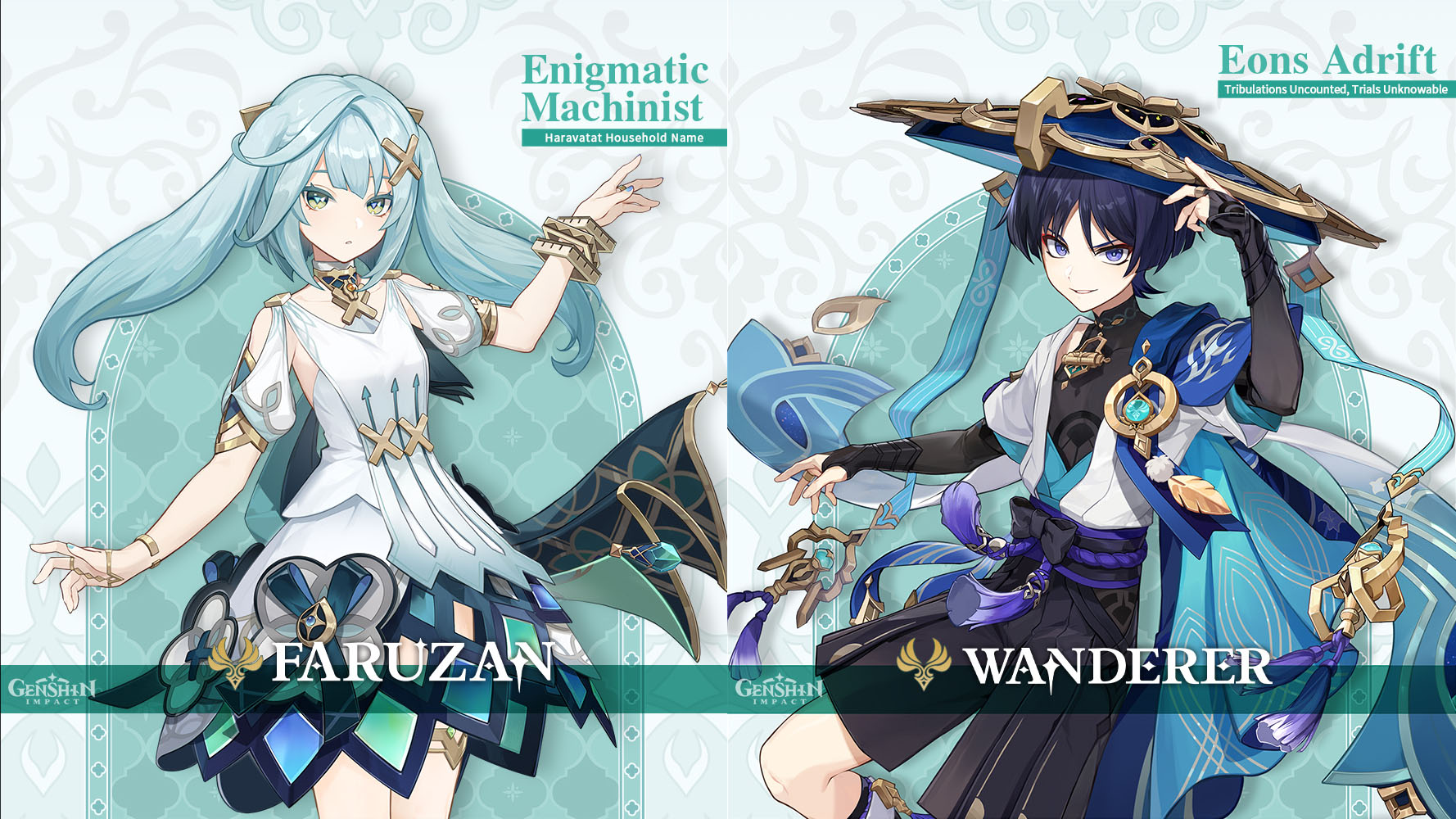 The new characters are Faruzan and The Wanderer.

This is how HoYoverse describes Faruzan, from the developer’s instagram.

Here is a legend circulating among the Kshahrewar students:
If you have failed your mechanics exams and do not dare ask for remedial lessons from your displeased tutor, you can make your way to Haravatat next door and ask Madam Faruzan for some tips.

There is no need to prepare a gift. Just remember to show sincerity and humility, and call her “Madam” respectfully. That will be sufficient to get into the living encyclopedia of mechanics’ good graces.

Madam Faruzan’s explanations are simple to understand yet insightful, and her in-depth knowledge really makes people wonder if she had a hand in writing the syllabus. Her guidance will help resolve the most daunting problems, though there remain two problems that all students must overcome on their own:
The first is how to hide their surprise when they see her youthful appearance.

The second is to refrain from asking her why she has been shunned in Haravatat despite having such erudition, and whether she should consider joining Kshahrewar.

If you are unfortunate enough to commit one of these faux pas, you shall bear witness to rhetoric worthy of a household name in Haravatat, especially when in the field of criticizing and reprimanding others.

We also get a description for The Wanderer.

On a fateful night, a figure arrived at a place that had once been called Tatarasuna. There should no longer have been residents there, but as if destiny had decreed it, a farmer had come there, picking Naku Weed to make a living. Thus it was under the moonlight that he saw a phantom figure standing on the edge of the cliff.

This person wore a wide hat that concealed their face entirely. However, the farmer could hear breathing through the pitter-patter of the rain.

A moment later, the figure spoke. “This is how humans should breathe.”
The farmer was terrified that he might had encountered some spirit, and hurriedly hid behind a rock. The figure spoke again. “What are you afraid of? Would a passerby such as I hurt you? I am merely here to tend to the grave of a friend.”

Silence filled the air once more. The farmer peeked out from behind the rock, and saw that the figure had vanished. A note drifted to the ground and was instantly soaked by the rain. Three questions had been written on that piece of paper, along with answers that were not yet fully written—
If humans have a heart, why do they not fear the hearts of others?
Due to their inferior nature.

How should one treat others, knowing full well their inferiority?

How can one be a human being without a heart?
One without a heart is hardly human.
Chills ran down the farmer’s spine as he finished reading the note. Tatarasuna had been deserted for many years, and it had been a long time since anyone came here to pay their respects. And even if there were, why would they appear on such a night?

Below you can also take a look at what they both look like.