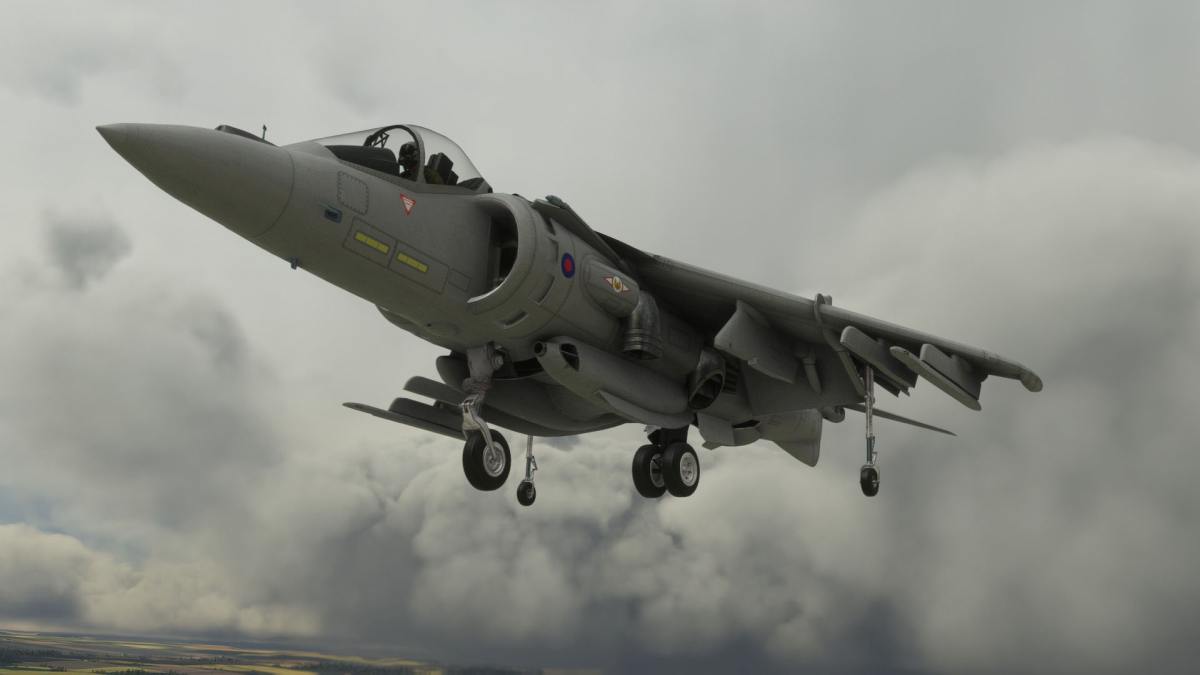 We start with DC Designs, which published a development update about the AV-8B Harrier II, which should be released between late September and early October.

“I have spent much of this week converting the aircraft to the latest version of the Harrier, which mainly involves alterations to the nose and tail areas. PBR textures have been applied as well as chaff-dispensers on the tail area and some other minor details to bring the model to a more accurate standard.

Also, a few sharp-eyed members here noted that the canopy shape was not quite right. It turned out that the blue-prints I’d used referenced an earlier version of the Harrier with quite a pronounced bubble-shaped canopy, whereas later versions are slightly lower and deeper. Although it’s quite a bit of extra work I decided that the Harrier looked better and somehow a bit “meaner” looking with this profile, so I have reshaped the canopy and canopy frame to more accurately match that profile, and of course added the nose IR sensor.

Although this model is the AV-8B +, a lot of people requested RAF liveries for it so I’m doing a couple of them for the package, but the GR9 variant will not be modeled in the package itself.
The VSTOL system that I previewed last week in the video is now working even better, thanks to CodenameJack. Nozzle position is now governed by the propeller-pitch variable in the sim, which allows the user to map it to an axis on a controller. This means that transition to forward flight from the hover is now seamlessly smooth. However, as per the real Harrier it requires good stick, throttle and rudder coordination to smoothly bring the Harrier from conventional flight into the hover again for landing. ( And not a WASM gauge in sight, meaning the Xbox launch is confirmed at the same time as all other platforms ).

All flight characteristics are in place, detail work is on-going in the cockpit ( decals, warning lamps, final display coding etc ) and as you can see from the images I’m working now to add liveries to the package. Sim Acoustics will be adding the custom sound in September and flight testing by our assisting real-world Harrier pilot should begin by the end of next week. We’re on the home-run now and on time and target for a late-September, early-October launch.”

IniBuild showcased the upcoming Curtiss JN-4 Jenny and Grumman G-21A Goose that have just been announced and will be available for free within the 40th Anniversary Edition of the sim.

The Curtiss Jenny is one of the most significant aircraft in aviation history. Introduced in 1915, The JN-4 was responsible for training an estimated 95% of all American WWI pilots and a significant number of the Royal Flying Corps pilots who trained in North America. By the end of production, 6813 Jenny’s had been built by six different manufacturers – such was the popularity of the design. Although designed as a military trainer, the Jenny is perhaps better known for its post war career.

Following the cessation of hostilities in 1918, thousands of surplus Jennys (some still in their original shipping crates) were sold into the civilian market. Civilian aviation was a brand new concept in the early 1920’s and the handling characteristics of the Jenny made it the perfect aircraft for the dawn of the barnstorming era. Many pilots, who would go on to become legends of aviation, took their first lesson or solo flight in a JN-4 and used it to complete many aviation firsts.

Our Jenny features a highly detailed model of the Curtiss OX-5 Engine. The OX-5 does not feature any rocker covers, so you will notice the exposed valve and the associated springs (3 per cylinder) all moving in the correct firing sequence. To take full advantage of this, we have placed a click spot inside the cockpit to allow the user to remove the cowlings on the ground. As an early open cockpit biplane, many of control linkages are fully exposed both inside and outside the aircraft. Over 800 cable loops have been faithfully recreated and the cables themselves have all been rigged using the original aircraft manuals.

Quite possibly the world’s first private luxury aircraft, the Grumman Goose was designed as a commuter aircraft for wealthy businessmen in the Long Island area. In 1936, a group of Long Island residents approached Grumman and commissioned them to build an executive transport aircraft that they could use to fly to / from New York city – The G-21 was the result. The first production variants were intended to carry two or three passengers and came complete with a bar, toilet and executive seating. The design was later modified to carry up to 8 passengers and went on to serve with various air forces around the world.

Every effort has been made to recreate the executive cabin in painstaking detail and features an authentic seating, bar, champagne bucket and restroom facilities. There is some excellent reference available for this aircraft, and when used in conjunction with factory blueprints and manuals, has enabled us to accurately recreate the feel of 1930s luxury travel. Special attention has been paid to modelling and texturing a highly detailed model of the Pratt & Whitney R-985 Wasp Jr which powered the G-21.

More content comes from Just Flight, which released new screenshots and a notes explaining the differences between the upcoming Avro RJ and the previously-released BAE 146.

We also get new screenshots from Aerosoft and its partner developer FlightSim Studio about the upcoming Progressive Aerodyne SeaRey Elite amphibious flying boat.

It’s available on SimMarket for $16.81 plus applicable VAT.

At the moment, the airport is available only on the official marketplace for $20.99, but it may reach other platforms later.