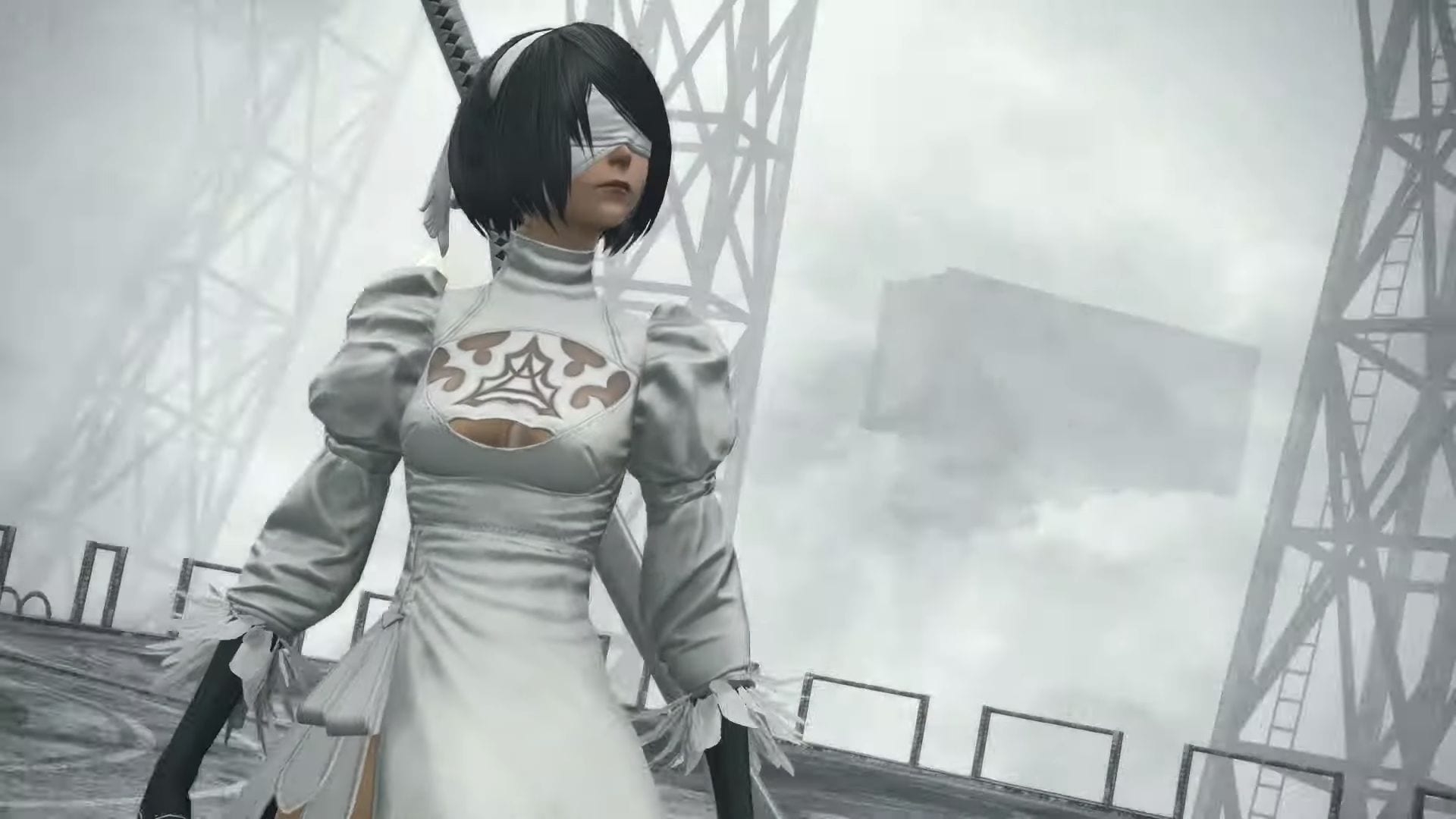 The screenshots showcase several elements coming with the patch, starting with the raid “YoRHa: Dark Apocalypse” tied in with NieR: Automata.

“Machina indistinguishable from men in appearance, speech, demeanor─anyone in Norvrandt would dismiss such an idea as the fantastical ramblings of drunken dwarves. The discovery of a white-clad woman identifying herself as an “android,” however, may call everything that has long been believed about technology into question…”

We also get more details from the official site.

“Newfound ruins amidst the Duergar Mountains have drawn the attention of curious dwarves and the Warrior of Darkness alike. The discovery of a pale-garbed woman calling herself 2P, however, will force these intrepid explorers to confront the reality─and dangers─of technology beyond their wildest imaginings.”

We also hear about the characters involved, starting with 2P.

“An android in white, awakened within the excavation tunnels near Komra. Her knowledge of the ruins and their machine lifeforms could be an invaluable asset…”

Next are the Dwarves Anogg and Konogg.

“Clever and curious twins who make their home─and a nuisance of themselves─in the village of Komra. They are determined that the Warrior of Darkness help bring their master plan to fruition…whatever that may be.”

Last, but not least, the iconic machine life forms.

“These peculiar machina, discovered in the ruins unearthed by Kholusia’s dwarves, are so unlike anything else found in Norvrandt that their very existence seems beyond the realm of possibility. Whence have they come, and to what end?”

Next in line is a look at the new trial, titled “The Minstrel’s Ballad: Hades’s Elegy”

“Hearken unto a requiem for a hero fallen. A man who lived a thousand thousand of our lives clinging desperately to faint hope, never shirking his sworn duty to his long-lost brethren.

A man who stood proud and did avow his true name on the threshold of the battle that would see him fall to his rival─the light to quench his shadow.

Borrowing liberally from the funereal rites of the Night’s Blessed, the minstrelling wanderer weaves an elegy in that hero’s honor─the tragic yet triumphant tale of a man and a battle that ne’er shall be forgotten.”

We also get to hear more about The Epic of Alexander Ultimate raid (which will actually come a bit later in patch 5.11).

“The clockwork fortress that manifested itself in the far reaches of snow-swept Dravania did bear an uncanny resemblance to the great steel giant sung of in the legends of the Hotgo, an Auri tribe hailing from far across the sea.

Inspired by this tragic tale of a mechanical god who placed his trust in a single mortal soul, the minstrelling wanderer spreads the proverbial wings of imagination and take flight, weaving an impassioned ballad of hope and despair profound”

Still in patch 5.11 we’re getting the Ishgar Restoration feature.

“With the Dragonsong War brought to its conclusion, the Houses of Lords and Commons have approved large-scale reconstruction works aimed at revitalizing the Holy See of Ishgard.

The principal site for the project is the Firmament district, which sustained extensive damage during the millennium-long conflict. Appointed overseer of this endeavor is the young Lord Francel of House Haillenarte, who now seeks able and willing artisans the realm over to contribute to this great and noble cause.”

Patch 5.15 will bring an update for Blue Mages.

“Since last you met, Martyn has been striving to further the interests of the fledgling Blue Mages’ Guild.

Not only has he uncovered a wealth of powerful spells for you to master, he has also arranged for groups exclusively comprised of blue mages to journey into perilous territory to test the limits of their abilities.”

The same patch will include a new Frontline, Onsal Hakair featuring the Danshig Naadam.

“The Xaela of the Azim Steppe are renowned for their ferocity in battle, a traditional preoccupation that culminates once each Tsagaan Sar as they clash to earn the right to rule in the Naadam.

Such infrequent conflict is insufficient to sate the Steppe’s most zealous warriors, however, thus the Danshig Nadaam─smaller contests to which the Grand Companies of Eorzea have now been welcomed.

Join forces with the Maelstrom and the Orben people, the Adders and the Ejinn, or the Flames and the Horo in this grand demonstration of martial prowess, and may the mightiest prevail!”

Moving on from content to features, update 5.1 will include an update to the bards’ Performance.

“For budding musicians who want to form their own band, the new ensemble mode makes it easier to synchronize with party members, while Performance Assistance shows you how to play a number of fan-favorite songs. There is even a host of brand-new instruments to try!”

Last, but not least, we get to see new mounts, minions, hairstyles, emotes, and the new PvP gear that will have you grind the new frontline for hours on end. Is that you Raiden?

If you want to see more of what the update will bring bring, you can watch the new trailer and the previous gallery of images. You can also read our extensive recap of the latest Letter from the Producer Live and the previous broadcast.