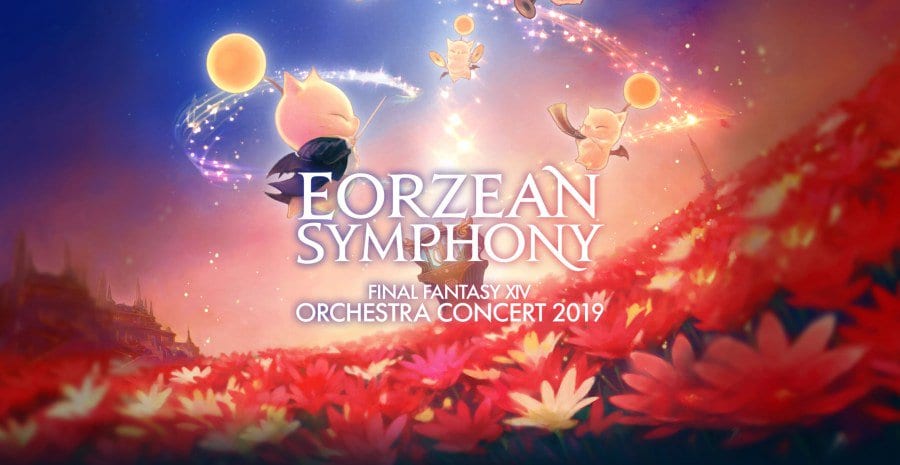 After stepping off the train in the popular Minato Mirai 21 District of the Japanese port city, I immediately noticed that many around me were there for the same reason as I was.

The Final Fantasy XIV crowd is easy to spot: besides the inevitable t-shirts boasting the defeat of this or that primal, there are often one or two details in someone’s attire that give away their identity as a Warrior of Light (or Darkness).

The most widespread sign in this kind of occasion is one or more pin(s) displaying their job(s) of choice. Of course, I was proudly wearing my Paladin pin myself, and it isn’t uncommon to cross paths with complete strangers exchanging that secret smile that silently says “I know who you really are.”

There are no language barriers, no differences in age, gender, or social status. Deep inside, we’re all adventurers in Eorzea. 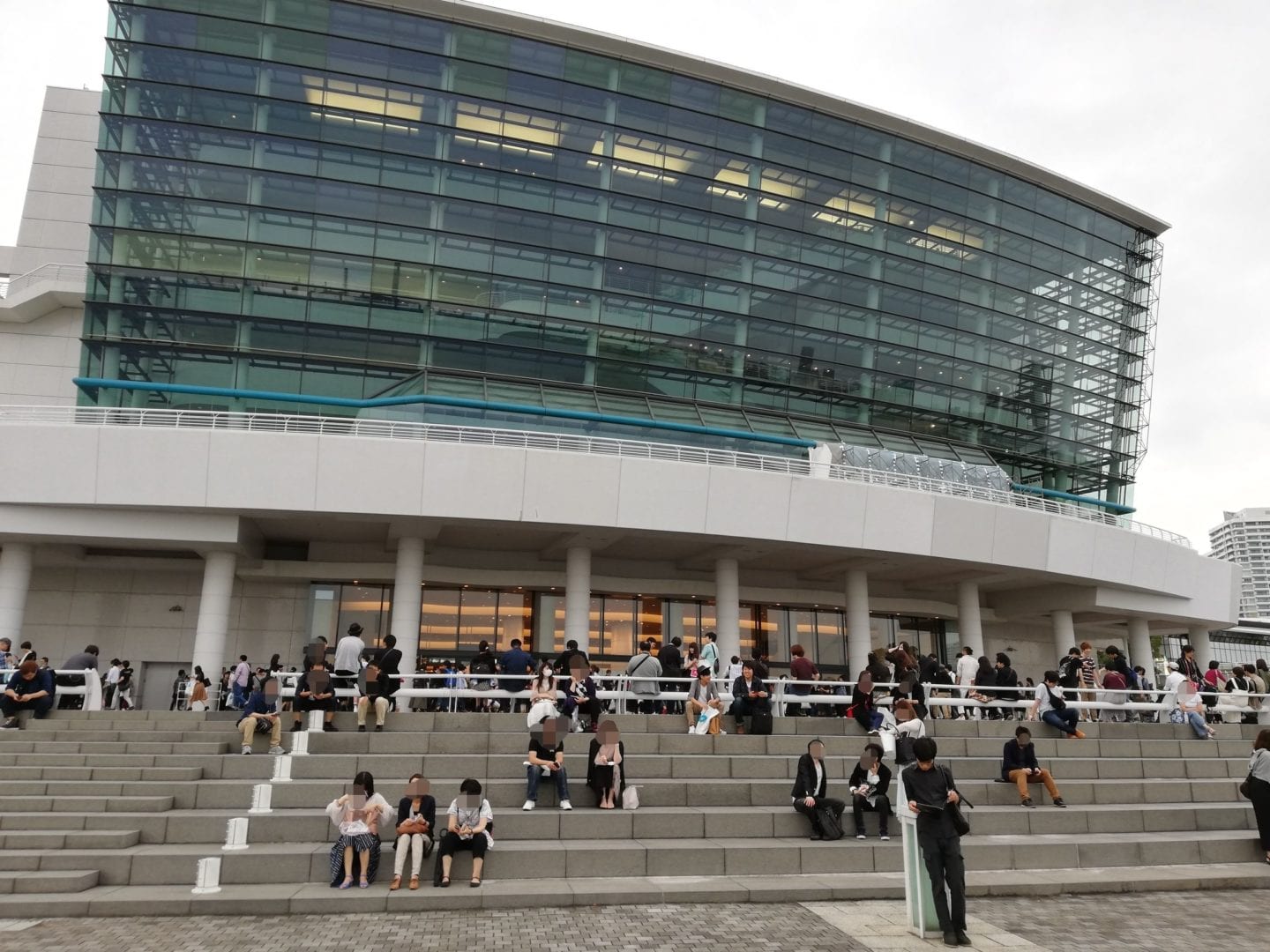 After many, many such encounters on the way to the concert hall, I finally reached the Pacifico Yokohama complex as the weather was turning sour.

Since I was slated to attend the second concert of the day, I was just in time to catch the exit of the crowd leaving the first one.

While the weather was definitely taking a turn for the worse, it was easy to spot hundreds of smiles on the faces of the army of Warriors of Light leaving the area.

Of course, having enjoyed the original FFXIV Orchestra Concert two years ago, I wasn’t that surprised to see that my fellow players had a very good time.

Upon my arrival 90 minutes before the concert, the line for the usual adorable merchandising was already long, and the one to gain access to the show proper was even longer.

The Pacifico Yokohama National Convention Hall houses 5,000 seats, and I didn’t spot a single empty one for this concert.

As the show finally started the audience was welcomed by funny jokes by producer and director Naoki Yoshida and composer Masayoshi Soken, who presented the whole show without missing a beat.

On the podium was Hirofumi Kurita, reprising the role of conductor from the first Orchestra Concert.

Sitting in front of him was the Tokyo Philharmonic Orchestra and a full choir of both male and female voices.

Speaking of the choir, a particularly funny moment saw Soken-san push Yoshida-san to take a position within the choir to sing along “The Measure of Our Reach” from Stormblood before improvising an Imperial salute and literally running off the stage.

American singer Susan Calloway, who has been lending her voice for years to the theme sings of the game from A Realm Reborn through Stormblood, carried the show once more with her gorgeous voice.

When she took the stage to sing “Dragonsong” and “Revolutions,” I have to admit that I started to cry without restraint (besides trying to be quiet).

Each song was paired with appropriate images from the game, and if you know the expansions, you probably know the scenes that made me bawl like a little kid.

Suffice to say that I was clutching at that very specific shield pendant that I always wear under my shirt until my knuckles turned white.

I certainly wasn’t the only one feeling emotional: In the darkness around me I could see plenty of lucid eyes, and an additional concert of sniffling sounds accompanied several poignant moments of the performance.

This may surprise those who are not familiar with Final Fantasy XIV, but the team at Square Enix has managed over the years to merge an absolutely epic and moving story populated by beloved characters with one of best soundtracks in the entire gaming industry.

Many of us have been “living” this story for six uninterrupted years, considering that this is an MMORPG and not a single player JRPG.

You can complete a single-player Final Fantasy game in a few weeks or even days, but this kind of MMORPG usually stays with you much, much, longer, until it becomes a relevant part of your adult life, with plenty of fond (and some sad) memories of its own.

Furthermore, there are those Warriors of Light like yours truly who have stuck with the game since even before its successful re-release in 2013.

We have walked the land of Eorzea since 2010, and we have moved our first steps in a world reviled by most, holding onto the hope to see it reborn. 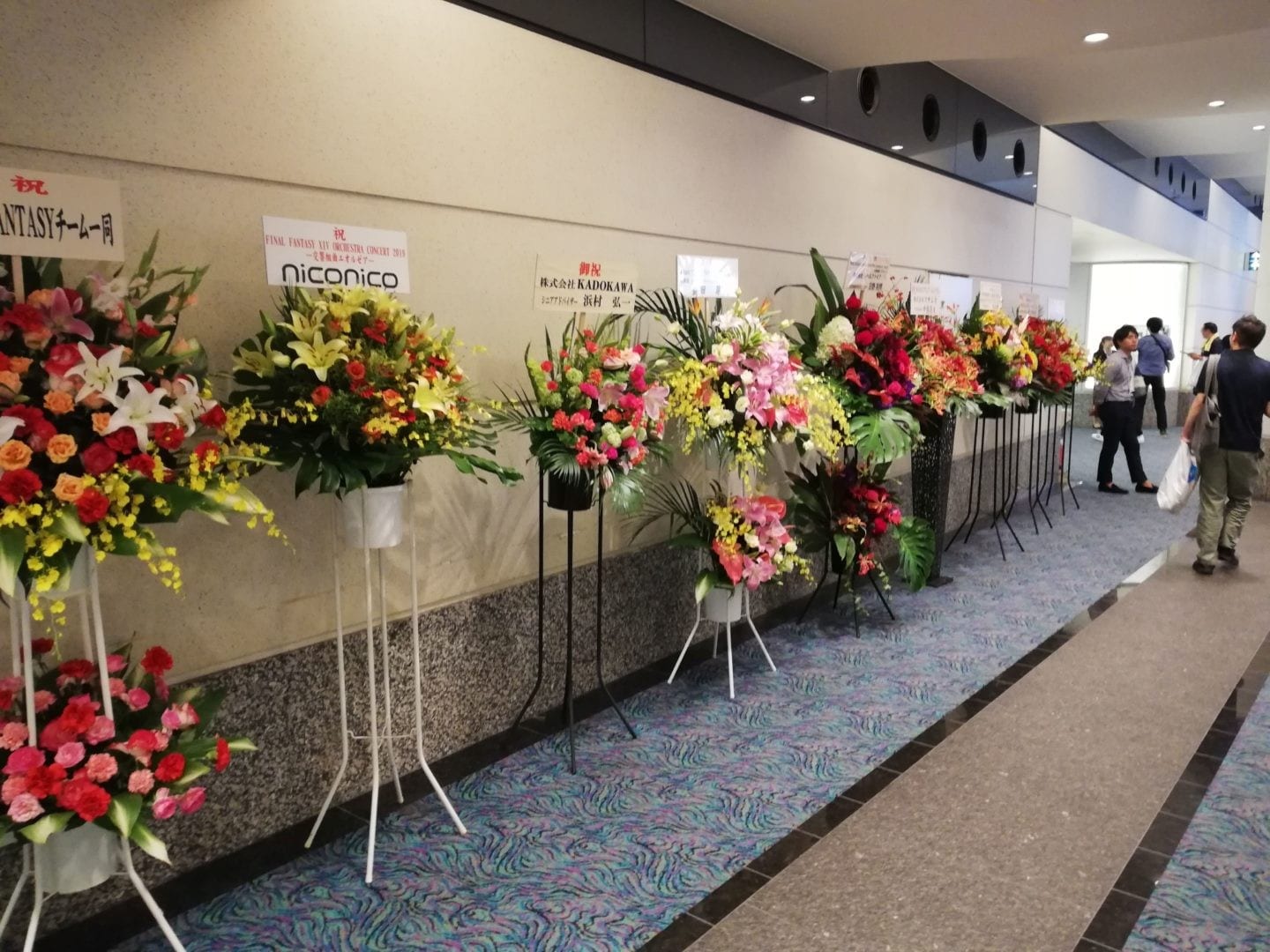 Those hopes became reality through one of the most epic emergent storylines ever created for a video game, so it shouldn’t surprise that Final Fantasy XIV is so intertwined with our lives that its memories open the floodgates of tears.

Make no mistake: the friends we lost in this game, even if many of them are fictional characters, were and are our friends. Seeing their last moments again on the big screen accompanied by Calloway’s familiar and beautiful voice would bring even the most seasoned roegadyn dark knights to their knees.

As the concert proceeded towards its final phase, Soken-san mentioned that it’d be nice to have another one dedicated to Shadowbringers, and I couldn’t agree more. Yet, the performers weren’t out of surprises just yet.

The orchestra delighted the audience with immortal classics like “A World Apart” (played with the lights on, likely to signify that the music was about us, the players, and let us see each others’ smiling faces), “The Worm’s Tail,” and “From the Heavens,” but the final checkmate was still to come.

In the most classic “one more thing…” moment, Kurita-sensei jumped back on the podium and the Shadowbringers logo appeared on the screen. Many, yours truly included, literally screamed.

As the notes of “Invincible” echoed across the concert hall accompanying poignant images, the emotional pressure exploded. Many among the audience were in tears again, and my glasses were fogging so much that I had to take them off.

If the original “Eorzea Symphony” from two years ago had a flaw, it was the lack of music from Stormblood, which was then the latest expansion.

This brief but intense Shadowbringers surprise yanked back to the surface all the fresh feelings generated by playing the expansion’s spectacular story just two months ago, granting the concert the final impact that it deserved. It was the true crowning moment of the evening. 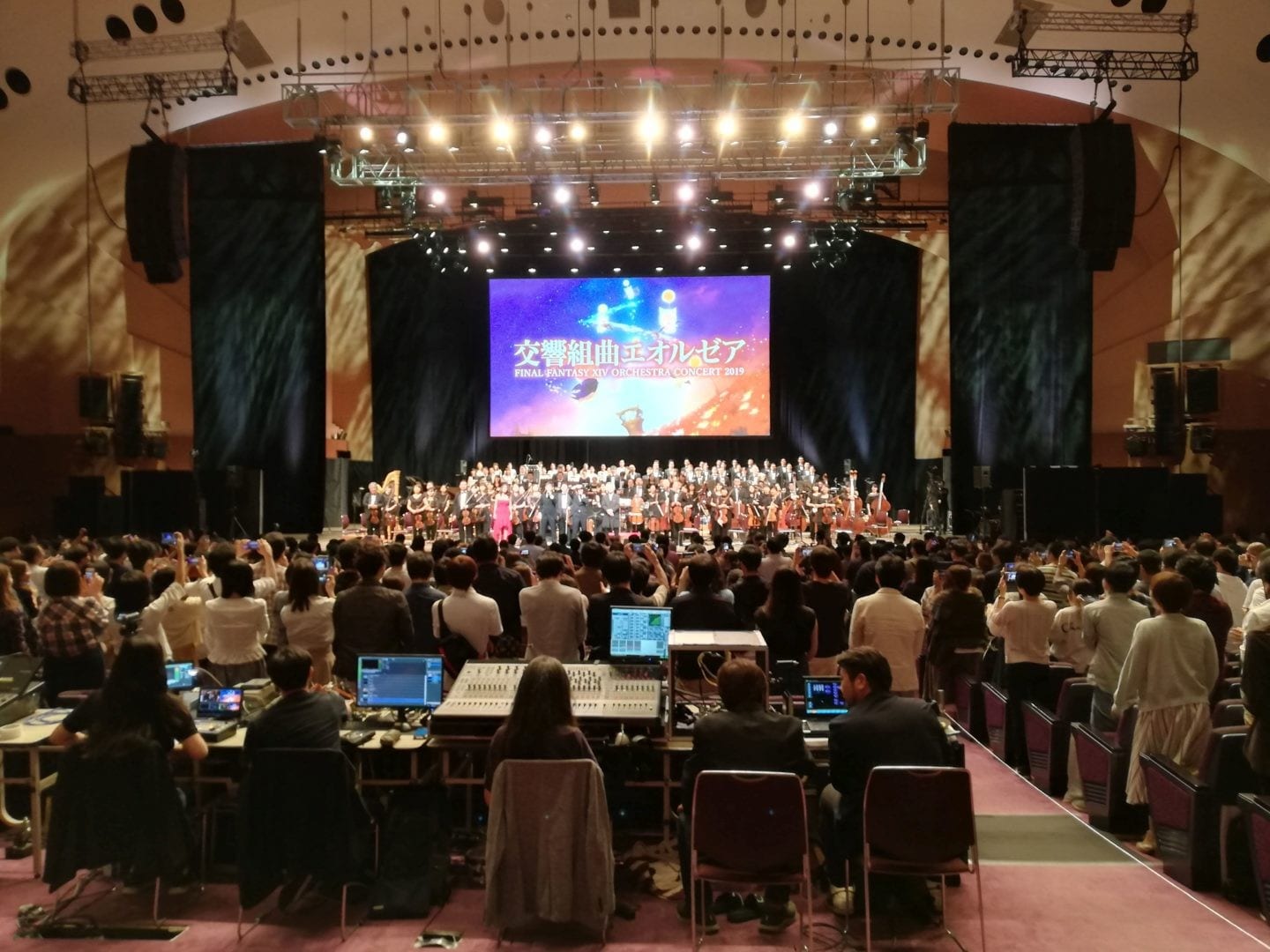 When all was said and done, the orchestra, the choir, Kurita-sensei, Yoshida-san, Soken-san, and miss Calloway had received four standing ovations, and in Japan, it’s already exceptional to trigger one.

The Final Fantasy XIV community has never been one to hide its love for the game and its creators, and its Japanese half isn’t an exception.

After the final applause faded, I simply walked out in the rain without an umbrella and didn’t even care.

Now I’m writing this on the train back, while the feelings are still burning inside. I’m wet from head to toe, but my heart is warm.

If you’d like to learn more about Final Fantasy XIV: Shadowbringers (which has recently been updated to version 5.05), you can read our recent interview with Naoki Yoshida and Banri Oda,  our review of the latest expansion and our article explaining why it features the best story among all the tales told by the Final Fantasy series.

You can also read the report on our latest visit to the Eorzea Cafe in Tokyo.

For the sake of full disclosure, the entrance ticket for the Final Fantasy XIV Orchestra Concert was kindly provided by Square Enix. Travel and accommodation expenses to Tokyo were fully self-funded by Twinfinite.

Update: Square Enix sent in a press kit with plenty of official images. We added them all in the gallery below.