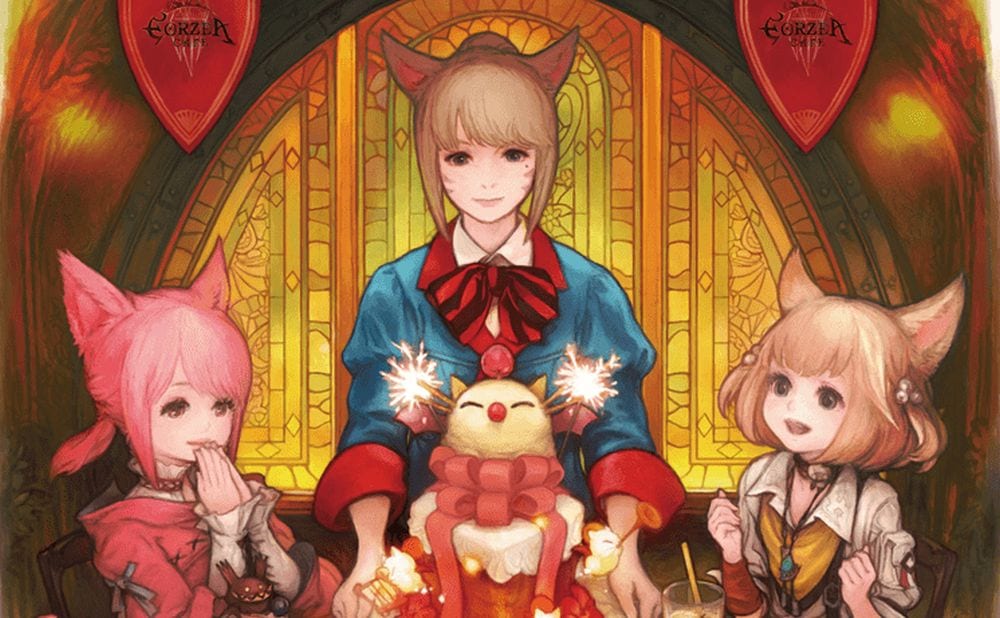 If you’re a Final Fantasy XIV fan visiting Tokyo, you basically can’t leave without dropping by the Eorzea Cafe, which just celebrated its fifth anniversary a couple of months ago.

Opened at the end of July 2014 within one of the Pasela Resorts karaoke complexes in Akihabara, Tokyo, the Eorzea Cafe distinguishes itself first and foremost for its longevity.

While themed cafes are very popular in Japan, they tend to be short-lived initiatives, often staying on the map just a couple of months to celebrate the release of a new game.

Those which have a longer lifespan are more often than not dedicated to a whole franchise, so they can count on a continuous cycle of releases to bring in customers.

The Eorzea Cafe, however, is one of the very few examples of a space dedicated to a single game which perdured for five years, and this is certainly a testament to the unyielding success of Final Fantasy XIV.

Six years in, the game has been driving record revenue for Square Enix even before the launch of the latest expansion, Shadowbringers.

This is something extremely rare in the MMORPG market, when user numbers spike after the launch of new content, and not before. With such a performance (even more impressive considering that the game requires a monthly fee), it’s not that surprising that Square Enix has opted to keep the Eorzea Cafe alive almost as long as the game itself.

It’s certainly rather popular, and it relies on a reservation system that lets it fit a limited number of attendees a day while remaining cozy and uncrowded. This contributes to establishing a pleasant atmosphere similar to that of the Carline Canopy in Gridania, which serves as the source of inspiration for the decor.

I visited the cafe for the first time just a couple of months after its opening, and back then, admittedly, the menu was hit-and-miss.

Most themed cafes in Japan rely more on the atmosphere and on the looks of their offerings than on the taste. This is not to say that they’re bad, but they’re not as special as the presentation would suggest.

The fact that this kind of establishment is usually short-lived contributes to the issue. Visitors are expected to come once, snap a few pictures for social media, enjoy looking at the mediocre food more than actually eating it, and then never come back.

The Eorzea Cafe’s peculiar longevity has contributed to making it rather unique even in this aspect. With the lifespan of the place extending past the first few months and passionate players continuing to come even multiple times, the staff had to evolve the menu over time, even more so considering that it has to change following the events of an ever-progressing game.

This means that the items on the menu are genuinely enjoyable even beyond their looks, and your tastebuds will be satisfied just as much as your eyes.

It’s no mystery that I am a dedicated Final Fantasy XIV player, and I absolutely love the game. This means that I visited the cafe several times over the years, and I did again just a few days ago.

I can certainly say that having reached full maturity, the Eorzea Cafe is now quite worthy of the reputation of Final Fantasy XIV.

Not only the food is good, but there is also a lot of variety. Short-lived themed cafes can get away with 10-15 menu items, but the Eorzea Cafe has almost 80.

Whether you want drinks, dessert, a snack, or a full-fledged meal, you likely won’t leave unsatisfied.

If you have suffered through “Raubahn EX” at the launch of Shadowbringers, you can now get your revenge by literally eating his face with the delicious Ala Mhigo Beef Bowl.

If you’re into cuteness, you’ll be spoiled for choice with the Spriggan Mine chiffon cake, the Good King Moggle Mog fruit salad, and many more colorful options.

If you’d rather keep it simple, you can go for the drink dedicated to your favorite job. Just keep in mind that if you’re one of those who has maxed the level of every single class in the game, you’re still human, so you should probably opt for moderation.

On the other hand, if you have a strong stomach, you can try and experience what Meol really tastes like. If you haven’t played Shadowbringers yet, I won’t spoil it, but if you have, you know what I mean. It’s yummy, mind you, just don’t think about what you’re actually eating and you’ll be fine.

You can check out a few of the dishes and drinks in the gallery below.

Incidentally, if you’re in Tokyo long enough that you in-game house is in danger of expiring, you can log into your character from one of the PCs available at the cafe and save your hard-earned abode.

Ultimately, if you love Final Fantasy XIV, the Eorzea Cafe in Tokyo will likely grant you a great time. On top of that, it has been around long enough to develop a menu with both quality and variety, which means that you can bring friends and family who don’t play the game, and they’ll probably enjoy the experience as well.

If you’d like to learn more about Final Fantasy XIV: Shadowbringers (which has recently been updated to version 5.05), you can read our recent interview with Naoki Yoshida and Banri Oda,  our review of the ltest expansion and our article explaining why it features the best story among all the tales told by the Final Fantasy series.

Since we’re talking about anniversaries, you can also read an interesting story from when the 1.0 world ended to celebrate the 6th birthday A Realm Reborn.