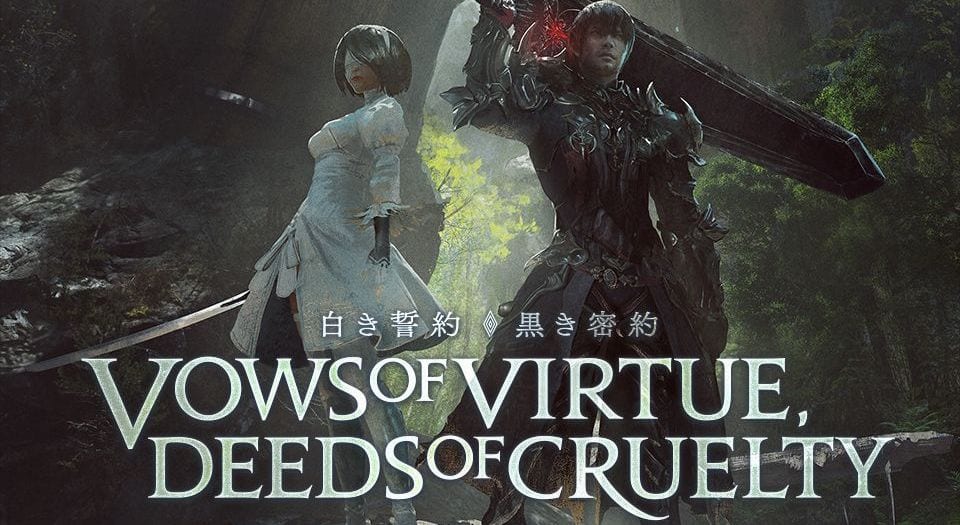 Today Square Enix broadcasted a new Final Fantasy XIV Letter from the Producer Live, and it was a really interesting one.

Producer and Director Naoki Yoshida and Global Community Producer Toshio Murouchi provided a lot of information about the upcoming update 5.1 “Vows of Virtue, Deeds of Cruelty”

First of all, we learn that the patch is coming on October 29, and the new trailer showing it off was released. You can watch it here. It’s definitely awesome.

Secondly, we get a recap of what we already know about the update. Everything is listed in the slides below.

We also learn that the Ishgard Restoration feature for gatherers and crafters will be added in update 5.11 which will come two weeks after 5.1,

We then get to take a look at the new trial “The Ministrel Ballad: Hades’s Elegy.”

The next relevant element is the upcoming changes to Jobs.

Ninja is the first under the spotlight showing how Mudra and Ninjutsu will share a global cooldown with weapon skills with a fixed recast time of 0.5 and 1.5 seconds respectively.

The potency of ninjutsu techniques has also been increased.

Trick attack has also been tweaked and doesn’t require to be executed from the rear and more.

You can read the full list below and see it in action.

Next is Samurai. Meditation will stack up to 3, but it won’t expire anymore. As a consequence, Shoha will require 3 stacks of Meditation, and more.

We also get a look at the changes to Summoner. Egi Assault and Egi Assault II will be considered spells and share the global cooldown, but their potency will be increased.

Tri-Disaster will directly damage enemies instead of inflicting ruination and the Enhanced Bane trait will extend the bio and miasma effects to their full duration.

For Bards, song will get a party-wide buff even if it won’t be as powerful as it was before Shadowbringers.

Speaking of tanks, Reprisal will become point-blank AOE and will have a longer duration. Abilities like Sentinel and Vengeance will have their duration increased to 15 seconds.

Monks will see the power of Mantra lowered a little, and Yoshida also teased a change to Dragoon to improve ease of use.

Red Mage and Machinist will get buffs to the power of their attacks. Acceleration will feature 3 stacks and a longer recast timer.

Next is the revamp to gatherers and crafters. Below you can see the new recipe tree integrated in the crafting UI.

The crafting UI will allow you to see a full list of materials for the recipe you want. If you have a gathering class unlocked will even be able access the Gathering Log.

Desynth will also succeed with a 100% chance, offering a viable alternative to turning in unwanting equipment to your Grand Company.

We finally get an overview of Ishgard Restoration, that will let players rebuild the Firmament. It’s mostly for crafters and gatheres and there will be a variety of tasks including item deliveries.

Progress of the restoration will be specific to each server. We also get to see a couple of screenshots of the devastated Firmament. The players’ missions will be to make it pretty once more.

The content coming in 5.11 will focus on rebuilding the infrastructure to facilitate further restoration.

Players will have to check the “Skybuilders’ Board” and hand-in crafted collectable items as requested.

At the top of the board there is a progression bauge that will fill up as items are provided.

After it’s full, players will have to take part in co-op work similar to a FATE alongside NPCs. Player participation is more important than the crafting skill level, so even lower level crafters will be able to contribute.

Those who contribute will receive rewards, some of which you can see below. This includes mounts, hairstyles, outfits, and more.

Future updates starting with 5.2 will add the ability to provide gathered collectables, a ranking system, a scratch card minigame, and the overhail of Diadem into a sort of gathering area.

We also get to see examples of upcoming housing items targeting the RP community including market stalls. There will be new partitions added as ell.

Gear from the design contest was also showcased and is coming.

We then see the new new Gold Saurcer GATE titled “The Slice is Right” in action. It looks like a lot of fun.

Next is a look at the beast tribe quests dedicated to the Pixies, which has its own instanced playground. You can see it below.

We also get the best news of the whole broadcast: it may be small for some, but it’s fantastic for roleplayers, and it’s an emote that lets you lean on walls.

We then move on to the New Game+ feature that will allow you to play past story quests. At the moment, quests from Heavensward, Stormblood, and Shadowbringers are included.

The questline from A Realm Reborn is being overhauled, so its quets will be added to the New Game+ at a later time.

You can leave the New Game+ at any time, and while instanced battles will be level-synced, you’ll be able to choose a difficulty level between Normal, Easy, and Very Easy.

We also get to see new mounts, tweaks to the Mirage Dresser, and a new outfit.

One of the most anticipated elements of the update is the YoRHa: Dark Apocalypse raid tieing-in Final Fantasy XIV with NieR: Automata, written by Director Yoko Taro and Producer Yosuke Saito.

We get to see the very beginning of the first raid, titled “The Copied Factory” featuring 2P, who appeared in SoulCalibur VI. It’s basically a crossoverception.

Yoshida-san mentioned that he can’t reveal the rewards, but he teased that players will likely be able to get what they desire.

Moving on to The Epic of Alexander Ultimate trial we get to see the initial cutscene and the first phase.

Some new merchandise was introduced. Players will be able to purchase a hilarious Hydaleyn Kick t-shirt (way to lean into those memes Square Enix), a Giant Beaver plush, and a set of acrylic character stands.

At long last we’re also getting the pin badges for crafter and gatherer classes.

A new 14-hour broadcast will come on December 14. The content is still to be determined, but Yoshida-san revealed that there will be a Letter from the Producer Live and more.

If you want to hear more of what the update will bring bring, you can read our extensive recap of the previous Letter from the Producer Live broadcast and how the patch will also bring more housing wards.