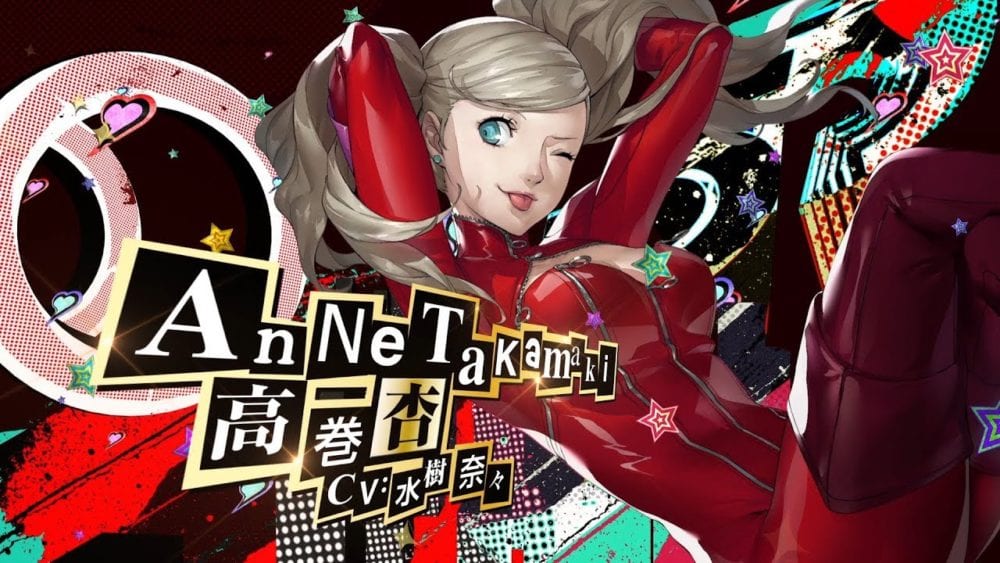 Among other things, it includes a ton of new images showing characters, locations, and new features.

First of all, we get to see new images and artwork about the hero, Ann Takamaki, Yusuke Kitagawa, and Ryuji Sakamoto. We also see their new personas.

Ann’s new persona is named Celestine. The name comes from Célestine Galli-Marié, was the first to play the role of Carmen in the opera with the same name.

Yusuke’s persona is Gorokichi, that is said according to one theory to be the name used in youth by Goemon Ishikawa. He was said to have been an Iga Ninja and to have been named “Goro” when studying under clan Iga.

Ryuji’s persona is William, which is the real name of Captain Kidd, a wild man known as a pirate who has made a name for himself while receiving support by many within the nobility.

We then see more of the new location in the western Tokyo district of Kichijoji, alongside a shotengai (shopping street) named Sanpo Road, which is a merged fictionalized version of the real streets Sun Road and Daya Road.

Incidentally, if you want to know more about how this location compares to the real-life location, you should definitely check out our dedicated article.

Specifically, we see some of the activities that can be done, including billiards. Not only playing with your friends will deepen your links with then, but it’ll improve technical attacks and the hero’s parameters.

Playing darts with other characters improves the Baton Touch battle mechanic with new effects. Playing requires both good aim and timing, and solid sensibility with the controller.

In the evening it’s possible to visit a Jazz club with a friend, and this will enhance their persona’s abilities. Of course, you can drink only non-alcoholic drinks.

Visiting the temple (which is a reproduction of the real Gessoji Temple in Daya Road) will let you meditate which can increase your maximum SP.

At the vintage clothing store, you can sell back items acquired in the Mementos dungeon. You can either get money or points that can be exchanged for various prizes.

There are various shops and food stalls in the district, which let you purchase items like menchi-katsu. Incidentally, this particular shop is a homage to Satou, a super-famous store in Daiya Gai that sells some of the best menchi-katsu in Tokyo, and attracts long lines every day. I can personally testify that the taste is worth waiting 20-30 minutes in line.

We then move to take a look at some of the events that will happen in the third semester that has been added to the game. In addition to them, you can enjoy various winter activity and seeing your friends in winter outfits.

Anne’s friend Shiho might be coming back to school, while Ryuji received some really good news. We also see Yusuke’s masterpiece “Sayuri” showcased at an exhibition.

Moving on to battle features, the Baton Touch now has ranks that can be improved by playing darts. As you do so, the attack and SP recovery rate also improve. If you involve all of the characters in the party, the SP cost of the last attack will be reduced to zero.

Various personas have been added including some that can be acquired by merging other personas. New accessories enable specific skills, making it easier to hit enemies in their weak elements. Personas also get new traits like increased damage from skills and more. Those traits can be inherited when combining personas.

Last, but not least, we see the “Show Time” co-op attacks, that are enabled as the story progresses and friendships deepen. We have already seen those with Ann and Morgana and Yosuke and Ryuji in their dedicated trailers, but one of the screenshots reveals another pairing Makoto and Haru, apparently wrestling-themed.

We then have a recent trailer in English, a batch of gameplay screenshots, the first character trailer focusing on Kasumi the second showcasing Ryuji, the third starring Ann, and the fourth focusing on Yusuke.

On top of that, you can check out more gameplay featuring the Hatsumode visit to the shrine on New Year, quite a few screenshots of the game, a few more gameplay videos, and two more showcasing the gun customization and “Ishi” features.