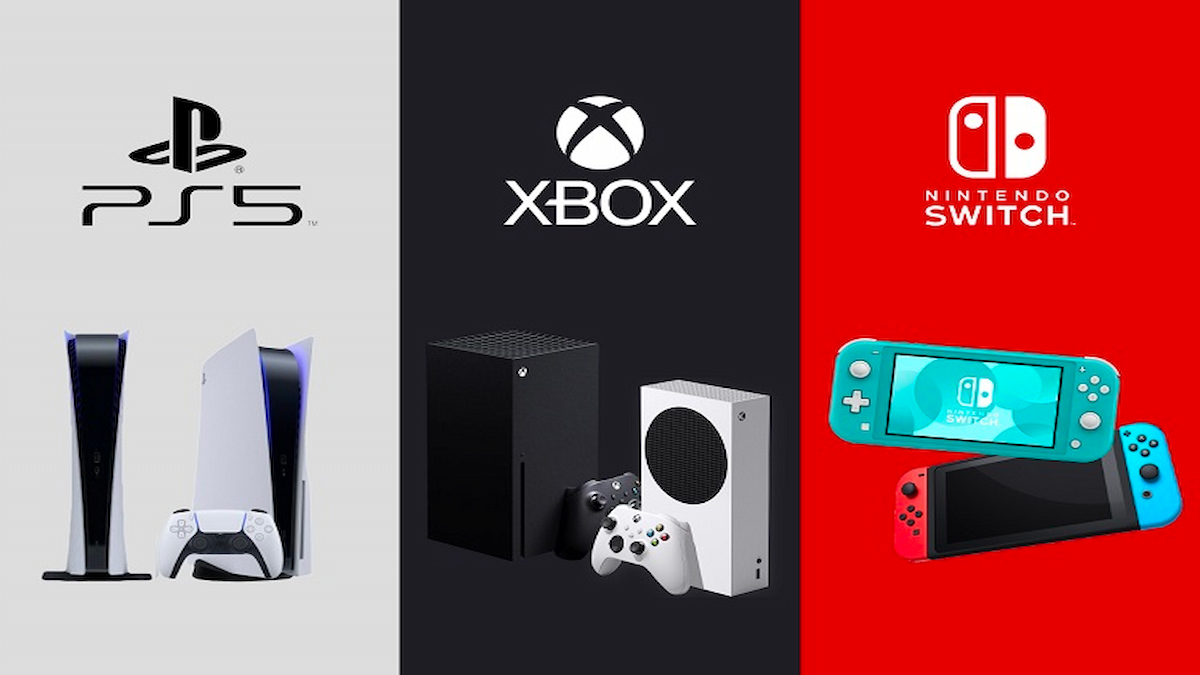 2022 has proven to be one of the most momentous years in gaming with major acquisitions that shook the industry to its core and further stoked the fires of the intense rivalry between PlayStation and Xbox, which is sure to continue into next year. This year also provided us with some solid exclusives from each platform, allowing us to explore the nine realms on PlayStation or the expansive region of Paldea with our starter Pokemon on Nintendo Switch. It’s been a great year to be a gamer, but when all is said and done, which console came out on top in 2022?

PS5 vs Xbox vs Switch: Which Console Had The Most Sales In 2022?

At the end of the day, this bout of the contest all boils down to a plain ol’ numbers game, so let’s kick things off with sales. According to data provided by VGChartz, 2022 has been a hard-fought battle between the PlayStation 5 and Nintendo Switch which was consistently the highest-selling console of each month of the year and had sold a total of 463, 213 units for the week ending Nov. 12. This is a fairly impressive accomplishment considering that the console is now five years old, though smash hits like Splatoon 3 and Pokemon Scarlet and Violet have been contributing factors to its continued success. Pokemon Scarlet and Violet raked up 10 million sales within three days of release while Splatoon 3 has had 7.9 million sales since it released.

The PlayStation 5 has slowly been closing the gap, though, and has sold an estimated 451,139 units this year with sales beginning to spike after the release of God of War Ragnarok. The release of Santa Monica Studio’s long-awaited opus provided the best week for PS5 sales since the week ending Dec. 25, 2021, when it sold 516,118 units. Xbox Series X|S has had far more modest success selling 230,013 units, a surprising number given that it’s still far more widely available than PS5. Each of the consoles has experienced varying degrees of success with increased sales, but Nintendo Switch still reigns supreme with a total of 115,176,785 lifetime sales, leaving PlayStation 5 and Xbox Series X|S trailing significantly behind.

PS5 vs Xbox vs Nintendo Switch: Which Console Had The Best Exclusives In 2022?

Love it or hate it, exclusives continue to be a deciding factor in which console players gravitate towards and this will be set to continue in 2023. Microsoft and Xbox really had a good chance to take the category this year in the wake of their unprecedented partnership with Bethesda, which allowed them to claim Starfield as a console exclusive. Starfield has been hugely anticipated by Bethesda fans for years and coupled with Arkane’s vampiric shooter Redfall, they both could have propelled Xbox Series X|S into the stratosphere… and then they were delayed.

Xbox did have a few solid offerings in the form of narrative adventure As Dusk Falls and Obsidian’s adventure Grounded. The experimental nature of those titles and the hype and chatter surrounding Nintendo and PlayStation’s major release didn’t do many favors for Xbox. Nintendo had one of the best sports games of the year with Mario Strikers: Battle League and continues to have success with the Pokemon series despite its ongoing issues. While not doing as well as they may have hoped in terms of sales, Nintendo was also able to appease hack-and-slash fans with Bayonetta 3, resulting in a strong variety of genres on the handheld system.

When it comes to exclusive first-party titles though, PlayStation is still king among men. Sony started off the year strong with the release of Horizon Forbidden West, which once again drew critical acclaim for Guerrilla Games and is currently enjoying its status as the UK’s fourth best-selling physical game of 2022. PlayStation also made room for indie gems like Sifu, providing an intense challenge for players, and Annapurna Interactive’s narrative adventure Stray, which revitalized the platforming genre.

PlayStation also allowed players to relive one of the greatest stories told in gaming with The Last of Us Part I, setting a new benchmark for modern remasters. It was the release of God of War Ragnarok, though, that truly set PlayStation apart from its peers this year with Santa Monica Studio‘s stunning conclusion to the series’ two-part Norse saga. Ragnarok truly peeled back the layers of its iconic protagonist through an unforgettable tale that serves as a game of the year contender for many.

PS5 vs Xbox vs Nintendo Switch: Who Had The Best Announcements In 2022?

Xbox, let’s not beat around the bush. Microsoft kicked off the year in a major way with its history-shattering acquisition of Activision Blizzard. While landing Bethesda in 2021 was impressive in its own right, it pales in comparison to its investment in Activision; a jackpot that brings major franchises of Call of Duty, Overwatch, and World of Warcraft under the Microsoft banner.

Meanwhile, PlayStation and Sony would respond in kind with their own acquisition of studios like Haven and Bungie, who are responsible for Halo and Destiny. Bungie is one of the most renowned studios in gaming and has carved an impressive legacy in the industry, but the status quo has seen Destiny act as a PlayStation exclusive. While Bungie will provide more live service titles for PlayStation, it’s not quite the industry shake-up that many hoped it would be. PlayStation would also announce their new subscription-based PlayStation Plus which drew mixed reactions from gamers and had to fight a major uphill battle at launch.

Nintendo, in comparison, had a fairly quiet 2022 with the biggest announcements coming in the form of ports for Persona 3, 4, and 5. Zelda fans have a lot to look forward to though as the sequel to Breath of the Wild was officially named Tears of the Kingdom and received a release date of May 12, 2023.

PS5 vs Xbox vs Nintendo Switch: Which Console Has The Best Subscription Service in 2022?

There’s no denying that Xbox Game Pass remains the best value-for-money service in gaming right now. Xbox really broke new ground with the introduction of the Game Pass and while PS Plus boasts an extensive library that surpasses the one on Game Pass, it struggles to compete with the additional features Xbox’s subscription service offers players.

PlayStation Plus got off to a rough start when it launched earlier this year but Sony has made a commendable effort to turn things around. PlayStation’s subscription service currently boasts a whopping 700 titles to download or stream and encapsulates PlayStation’s entire history, dating back to the original console. The library on Xbox Game Pass is made up of 300 titles. The biggest weakness of PlayStation Plus is arguably the tier-based approach, which means that the majority of those 700 titles are locked behind higher tiers. Sony has also divided opinion through some of the titles being added to the Premium Tier of PlayStation Plus with players questioning the thought process behind it.

Xbox Game Pass on the other hand allows players to access its entire library at the same price point. While Game Pass doesn’t quite offer the same volume of titles available on PlayStation Plus it is ultimately far more consumer-friendly and offers a superb experience for players. What sets Game Pass apart from other subscription models is the ultimate subscription which gives players access to thousands of Xbox One games, including exclusive titles.

Xbox is looking to continue its player-first approach with the reveal that all upcoming first-party titles will be available to play on Game Pass on launch day. Yes, that does mean you can play Starfield for free, day one, with a Game Pass subscription. There are also a fair amount of goodies available to players who can also access the entire Game Pass library from their PC as well as access to trials of Apple TV, Calm app trials, and an Xbox Live Gold subscription at a massively discounted price.

Nintendo, meanwhile, continues to add beloved titles from its extensive history dating back to the early days of the NES to its online library. Players can enjoy quintessential games like Majora’s Mask and Super Mario World, and while it’s fun to revisit these childhood classics, it doesn’t quite have the same ‘wow’ factor as Game Pass and PS Plus.

PS5 vs Xbox vs Nintendo Switch: Which Console Has The Best Value for Gamers in 2022?

There are some who still haven’t made the jump to current-gen consoles due to the continuing lack of availability — which has admittedly improved in recent months — and the rise of prices for hardware in some locations. This question is one that is first and foremost in the mind of gamers. Longevity is a key part of success for consoles in today’s current climate, so which of the competitors has the best features that will keep players coming back for more?

The PlayStation 5’s main selling point will always be the first-class exclusive titles that are available to play on the system. Sony also changed the game with the new DualSense 5 controller, which revolutionized gameplay for players with the use of haptic feedback and adaptive triggers. PlayStation 5 also offers the most immersive experience for players through the use of dynamic 3D audio, and most recently, with the introduction of VRR support to the console this year.

We’ve only really scraped the surface of what the PS5 is capable of this generation. As it stands, the console is capable of 4K/120FPS gameplay and can even support 8K in some instances thanks to the powerful RDNA 2G GPU hard drive. While the PS5 had a limited amount of titles available at launch, its ever-growing PS Plus library will provide endless hours of entertainment for players. The PS5’s biggest drawback remains its clunky design which leaves us craving a PS5 slim.

Xbox Series X|S is more widely available, has a cheaper price point in some locations, and is more accommodating for backward compatibility than the PS5. The console is also a wonder to behold in terms of hardware, boasting rapid fast loading times, impressive features like quick resume and FPS boost, as well as stellar visuals which can rival top-end gaming PCs. While Xbox offers excellent value for money with Game Pass, it is held back by its limited library of exclusive titles for the current generation.

The main selling point of the Nintendo Switch still remains the fact that you can take the console with you wherever you go and while it boasts some excellent exclusive titles and an impressive library, it pales to the growing popularity of the Steam Deck and the incomparable amount of titles available to players on that system.

PlayStation still remains at the top of this current generation for the time being and looks to have another successful campaign in 2023. A new year signals a new start though, and Microsoft has planted the seeds for next year to be one of its biggest yet. PlayStation fans have Final Fantasy XVI to look forward to next year as well as the long-awaited release of Insomniac’s Marvel’s Spider-Man 2, which has all the potential to be another major hit for PlayStation. Xbox on the other hand has potentially the biggest game of the generation so far with Bethesda’s Starfield, and if the acquisition of Activision is finalized, it could change the landscape of the industry as we know it. If anything, next year will only see the rivalry between the two heat up even further and potentially see the pendulum start to shift.