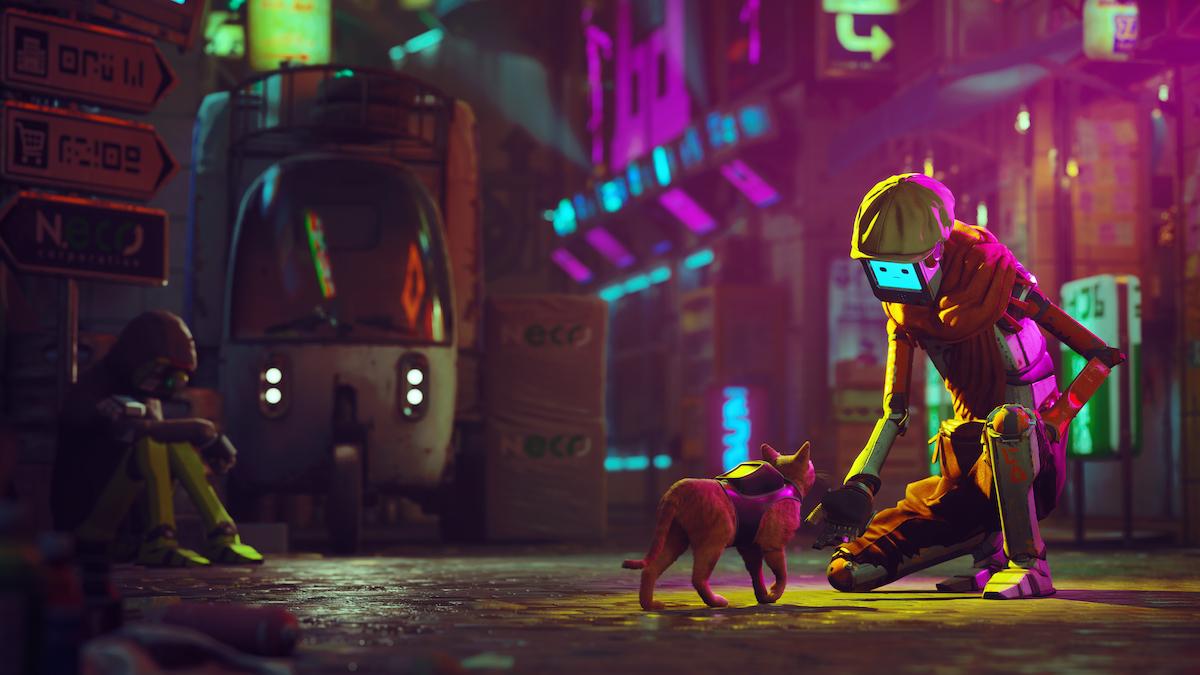 Many of my favorite moments from games set in dystopian, cyberpunk settings are simply meandering through city streets. I’m endlessly fascinated by their dingy confines, lit up by bright neon signage advertising some product or service at odds with the air of despondency brooding from the shadows. Stray features one of the most compelling renditions of this tropey, near-future aesthetic I have ever explored, and uniquely, from the perspective of a cute cat.

French developer BlueTwelve Studio’s debut game is a puzzle platformer about unearthing the mystery of a strange, fallen metropolis. Its protagonist, an orange tabby separated from its family by a stroke of misfortune, accidentally finds itself caught up in a society of sentient robots whose society mimics a long, lost human species who lived there previously.

The companions, as they’re known, live in safe zones dotted throughout the city, constantly in fear of Zurks, a creepy and voracious species intent on eating everything in sight — flesh or metal. But these bizarre creatures aren’t all they’re hiding from; the companions live in isolated communities, sealed away from the outside world. They are convinced that conditions outside the city walls are too hostile to sustain life — the reason the cities were built hundreds of years earlier.

And yet, the chance appearance of a furry feline from beyond the walls suggests to them that life might exist after all. So begins your plight, first to make contact with companions in villages afar, and then to open the seal that has kept the city entombed for so long.

Stray is mostly linear in design, but it does feature several hub areas where the focus is firmly on free-roaming exploration. Locations such as the Slums, Antvillage, and Midtown are all fairly large sandboxes, where you’re charged with slinking around neon-soaked streets and gloomy alleyways between various buildings central to progressing the story. There’s a pleasing verticality to these areas, too, allowing you to jump up and traverse across boxes, ledges, drainpipes, and through windows in the sort of ways you would imagine a cat would.

In general, I think Stray does a fantastic job of capturing the sensation of being a cat, from the way it feels to control to offering players all sorts of whimsical, totally unnecessary but oh-so cat-like distractions to engage with. For example, you can scratch at sofas, doors, and carpets; sometimes, there’s a purpose to doing so, but often it’s… just because. There are numerous areas to snuggle up and catch a few winks, too, and it’s possible to nuzzle up to NPCs to show affection. You can even meow on command!

Of course, cats can’t communicate, which makes navigating a story-driven experience a little tricky if not for a small, robotic drone named B12, who essentially acts as a translator between the cat and the companions. Handily, B12 is also able to hack computer terminals, provide a flashlight, and later, even some offensive weaponry to help you on your way.

These tools, natural and augmented, are at your disposal as you progress through Stray, which is mostly a fairly relaxed puzzle platforming experience but also, at times, involves more intense platforming and even stealth-action sequences. Most of your time is spent stringing together various character interactions by playing detective kitty; for example, you need to gain access to a store to steal an item of clothing, but the store owner won’t allow access until the shop is restocked. That can’t take place until a slack shopworker is woken up from a drunken slumber at a local bar. So, you locate the bar, climb a shelf, paw a crate of bottles onto their head, then follow them back and quickly jump in a box as it’s being handed over. Yes, you can jump in boxes.

There are a bunch of optional mini-quests to check off, as well, and collectibles to find along the way. These are all straightforward and generally easy enough to tick off, which I think suits the relaxed pace of Stray. It’s all worth doing, too, because it helps to flesh out the lore of the world and piece together B12’s mysterious past, which I found myself totally immersed by through the game. There’s a charming, heartfelt story to unfold in Stray that offers some interesting social commentary, as any dystopian fiction should.

Puzzle-solving, which features both physics and spatial-based design, is a core mechanic in Stray. Most of these are well done, though if I had a complaint, it’s they’re often lacking complexity in design. Again, I don’t really think a high difficulty level would necessarily suit Stray, but some of the puzzle design is a tad too basic. They typically look fantastic and are intuitive to engage with, but I think BlueTwelve Studio could have got a bit more creative.

When I think of the very best puzzle platformers, INSIDE is one game that comes to mind for the incredible design of its puzzles, which felt intuitive but deep and multifaceted in how they could be completed. The physics of the game’s graphical engine certainly helped to that end which is something Stray doesn’t have. Also, though there’s nothing wrong with Stray’s controls per se, it doesn’t have that same tactility in the way it handles. You can’t jump on command, for example, and so the platforming is very rudimentary in its scope.

Still, while it might not be especially ambitious in its gameplay systems, what is there functions perfectly fine. And again, Stray just looks absolutely brilliant, and its world is replete with detail. The city itself is almost the star of the show, animated to a standard that rivals AAA production values seen in games and cinema. I absolutely adored exploring it, and doing so from the perspective of a cat offers such an unusual and compelling viewpoint. Its ambiance, brought to life by dozens of well-written NPCs, does a fantastic job of conveying a believable setting — a totally strange and otherworldly one, certainly, but bustling and authentic.

Even soaking up its atmosphere as much as I did, though, Stray doesn’t last very long. It took me nearly six hours to complete, and that was with a fair bit of exploration and optional quests along the way. I can’t see the game taking longer than eight hours under any circumstance, which makes it very much a bite-sized experience well-suited to a quiet weekend in. I actually found that rather refreshing, and I like the way Stray paces itself throughout, introducing new mechanics and features that don’t ever feel repetitive by its end.

Speaking of refreshing, from a technical standpoint, Stray doesn’t at all feel like the usual day-one modern video game release, mired by hiccups and bugs. There was only one occasion where I had some stutter and framerate drops towards the very end, but it was hardly noticeable. Overall, it feels more refined off the bat than many similar games do after multiple patches. It really is a quality over quantity experience in that sense.

I’m very high on Stray overall, as you can probably tell by now. It might not quite have the substance and complexity in design to elevate the experience to genre-leading heights, but there’s so little to fault and so much to love about it that I’m certain, cat lover or not, it shouldn’t be missed. Stray is a superb achievement for a debut project from a studio in BlueTwelve that I cannot wait to see more from. 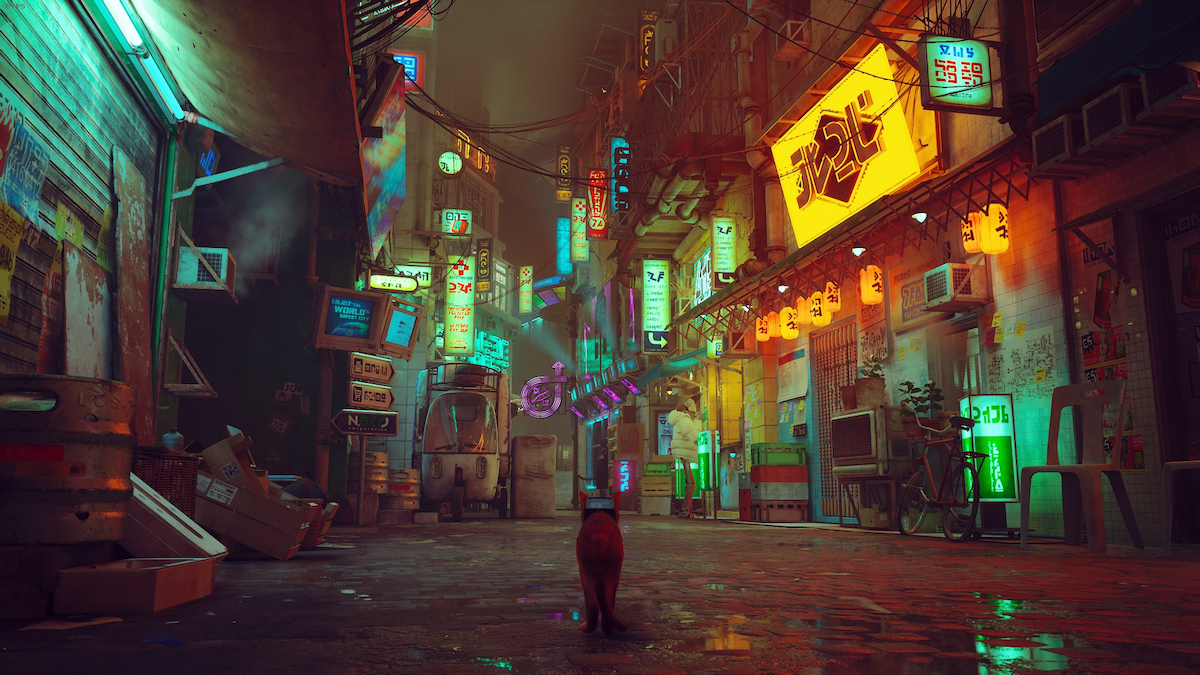