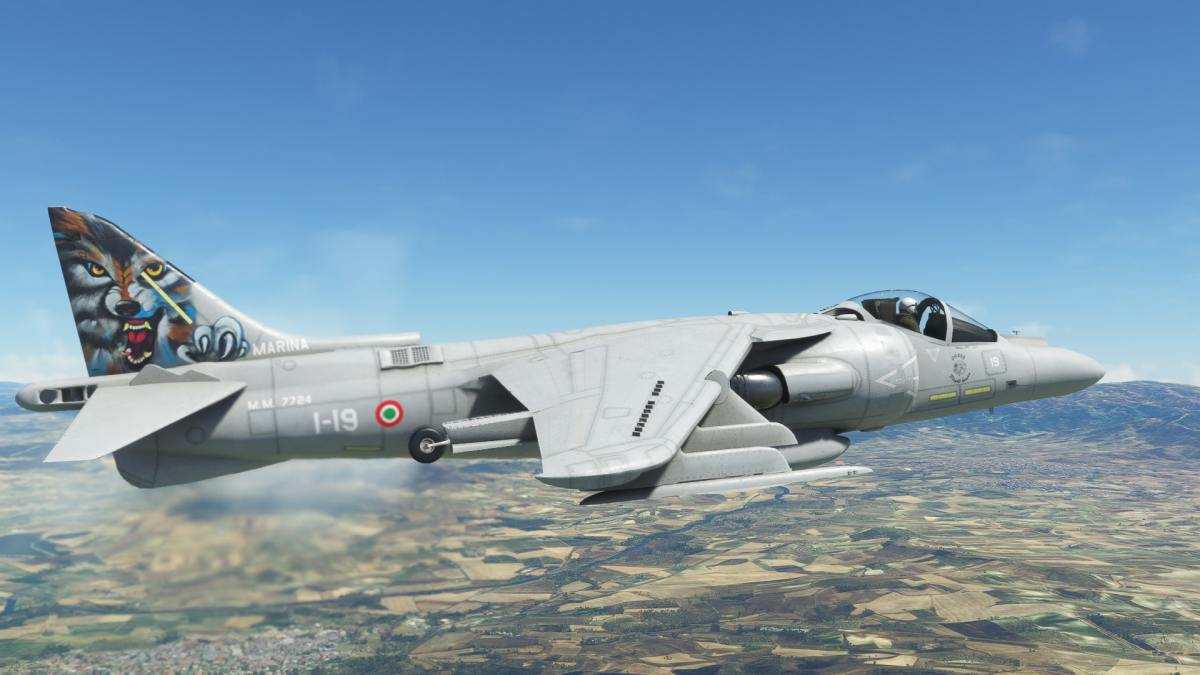 We start with DC Designs, which provided new screenshots and an update about its AV-8B Harrier II. On top of that, we also get a tease of “one of the most modern and popular fighter aircraft in the world” coming “within a month or so” for both PC and Xbox.

I shall use this brief update to inform everybody of two cool new things happening at DC Designs. The first concerns the Harrier, and something that several people have asked: “Can you make the Harrier “bow to the crowd” while hovering, like it does at air displays. I had not had the chance to test this until recently, and yesterday was able to give it a go. The answer was: yes you can! However, to balance the Harrier while performing the bow and not climb, drift or descend is really difficult even in light winds. The aircraft’s engine thrust responds to N2, which means there is a lag between adding or removing power, and the thrust altering to climb or descend in the hover, which complicates things even further.

The second thing is that there has been a very, *very* secret project underway for some months now, and this project will be officially announced next week. It is a fighter aircraft, one of the most modern and popular in the world, and I’ve been building it for a brand-new developer with whom I have gone into partnership for this and other projects in the future. We have been working to produce new aircraft that are announced late in production and released fairly quickly thereafter, on both Xbox and PC. They do the flight model, systems and html code, and I build the model and animations. If that sounds familiar, it’s because it probably is, but it’s now an official thing and will broaden the scope of aircraft on which I can work and learn from.

I am under a Non-Disclosure Agreement with the new developer, so I have not been able to discuss this aircraft with anybody and cannot answer any questions about it. All I can say is that it’s incredibly awesome, tremendous fun to fly in MSFS, and will be released within a month or so with Just Flight ( and on the Marketplace as soon as the new developer’s store is cleared with Microsoft ).

Incidentally, today we see liveries from the Italian and Spanish navy for the Harrier.

We stay in the realm of military jets with a “release” trailer of the M-346 Master by IndiaFoxtEcho.

Despite the title of the trailer, a release date has not been announced but the aircraft is on “short final.”

We also get a trailer from Cockspur, showing off the upcoming Cessna Citation Mustang.

Last, but not least, MT Scenery Design announced a major change in the release plans for its Coventry Airport (EGBE) in the UK.

While it was planned to be delivered as payware, the airport will now be released as freeware in its current “majorly finished” state on Flightsim.to.

After release, it will be updated over time adding more buildings and missing details.

The airport has been in development for nearly two years and since the developer has become very busy, they’re unwilling to make people wait longer.

While the airport will be free, those who enjoy it will have the option to contribute with a donation.