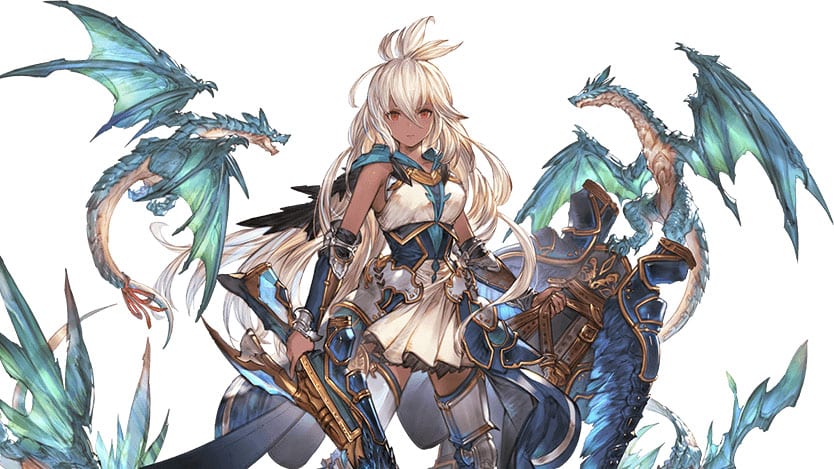 Today there’s news for Granblue Fantasy Versus fans ahead of the North American release coming soon.

First of all, we get the reveal of the fifth DLC character who will join the roster as the fifth of the first season pass.

Many (yours truly included) have already purchased the Asian version of the game, and when today we went to purchase the three color pack DLCs for the character pass, we found out that the PlayStation Store in Hong Kong had Zoey listed as the fifth character, as you can see below.

If you’re not familiar with Zoey, you can check out her artwork at the top of the post.

She was already rumored as an upcoming DLC, but it’s nice to have confirmation.

Of course, Zoey has not been announced officially yet, but there are very few doubts left.

We also get to see trailers for three system voice packs that have been released today on the Japanese PlayStation Store. Each does what it says on the tin, including the voices of four characters as announcers.

On top of that, update 1.11 for the game has just been released, adding support for Beelzebub and Narmaya, seven weapon skins for each, five new quests for the RPG mode (two of which require having Narmaya), and more.

Speaking of Beelzebub and Narmaya, we also get lovely artwork to celebrate their release shared via Twitter.

Granblue Fantasy Versus  launched on February 6  in Japan and Asia for PS4, while western players are still waiting for the North American release on March 3, 2020 and for the European one on March 27. The PC version will launch worldwide on March 13.

If you want to see more of the game, you can also enjoy the epic opening cutscene, the prologue, a trailer showcasing the soundtrack, another starring Zeta and Vaseraga, one revealing Metera, one showing off the RPG Mode, a few screenshots from a few months ago, another trailer revealing Percival and his first gameplay, another video announcing the previous character Ladiva, the video that came before featuring Lowain,

Speaking of DLC, you can check a trailer that announced the first season pass, another focusing on Beelzebub, and one on Narmaya.