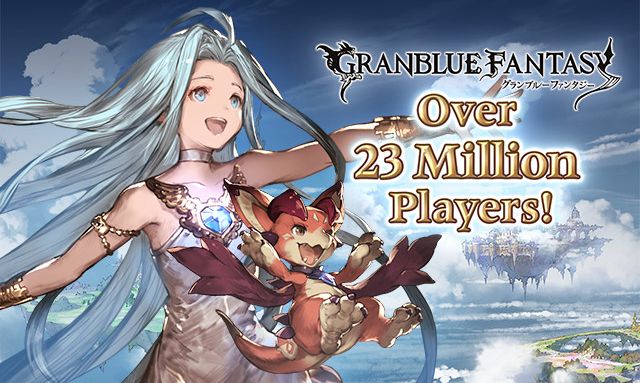 How to Install Granblue Fantasy & Play in English

Luckily, the game is fully localized in English, so playing is fairly easy. That being said, there is a caveat. Since it hasn’t actually been released in the west, you have to go through some hoops and a few menus in Japanese to sign up and actually get started.

This guide aims to help you through that process, so that you can be on your way in one of the best JRPGs for mobile platforms (and browsers) ever released.

For the purpose of this guide, we start from the browser version, which is the easiest, and then expand to mobile if you’re interested in playing on your smartphone as well.

Getting Started with Granblue Fantasy on Browser

First of all, go to this link. It works only on Google Chrome or Safari. The first thing to do is to set your interface’s language to English. As you can see below, click on “日本語” (which means Japanese) and change it to English, then click on Save Changes.

The second step is fairly straightforward. Just click on “New Game.” You will be presented with a fairly lengthy tutorial in English. It’s very easy to follow, and you can skip it. That being said, if you’re playing Granblue Fantasy for the first time, you should definitely play it and learn the basics.

Keep following the tutorial until Granblue Fantasy opens a new tab in your browser showing the following screen. This is your prompt to create the Mobage account that you’ll need to play the game on all platforms. Type in your email address and then confirm by clicking the green button.

You’ll receive an email from Mobage with a code that you’ll need for the following step. Keep in mind that many mail providers might interpret it as spam and tuck it away in your spam box. If you don’t see it, that’s probably where it is.

Go back to your browser, and insert the code where indicated below, then confirm with the green button.

Now it’s time to type in your data following the fields in the image below. The check under the date of birth can be used to refuse to share it (but you may be restricted in making purchases within the game).

The first option for the secret question is your mother’s maiden name. After you’re done, you can confirm all of this by tapping the green button.

If you’ve done everything correctly, you’ll see the following screen. You know the drill by now. Confirm by pressing the green button and you’ll be redirected to the game’s screen. If you want to play only on your browser, you’re done. Everything will be in English from now on. If you also want to play on mobile, read on.

Getting Started on Mobile

Moving from browser to mobile requires going through a few more hoops.

Let’s start with actually downloading and installing the client. If you want to play on iOS, your best bet is to make a Japanese account and then download the client here. Once you’re done. skip the following step related to Android.

The Android version requires a bit more work, but after that you’ll be able to play on your usual Google account.

First of all, you need to install a third-party video game client named Qooapp. It’s not available on Google’s Play Store, but you can download and install the APK from here. It’s actually an invaluable resource if you like to play Japanese and Asian games that haven’t been released in the west on Android.

Once you have the app installed, follow the steps below. Creating a Qooapp account is not required.

Now Granblue Fantasy is installed, and you’re almost done. Open the app, and click on the button that prompts you to log in with your existing account.

The app will open your browser and you’ll be prompted to type in your login credentials for the Mobage account you created before as seen below. Confirm with the yellow button.

You’ll be sent back to the app, but you’ll likely have one more small hurdle since it’ll be in Japanese. Follow the steps in the image below to change the language to English in Granblue Fantasy.

At this point, you’re done, and able to play interchangeably on your browser and on mobile. As long as you’re logged in, your gameplay data is automatically synchronized, and you don’t need to perform any manual transfers.

Welcome to Granblue Fantasy, one of the best mobile JRPGs ever released. Some of you may have followed this guide simply out of curiosity due to the upcoming PS4 games, but you’ll probably find that it’s worth playing the game as it is.

It features a great storyline, fun and deep gameplay, an awesome cast, beautiful art by Hideo Minaba of Final Fantasy fame, full top-notch Japanese voice acting, and even music by Nobuo Uematsu. Can’t ask much more of a game.