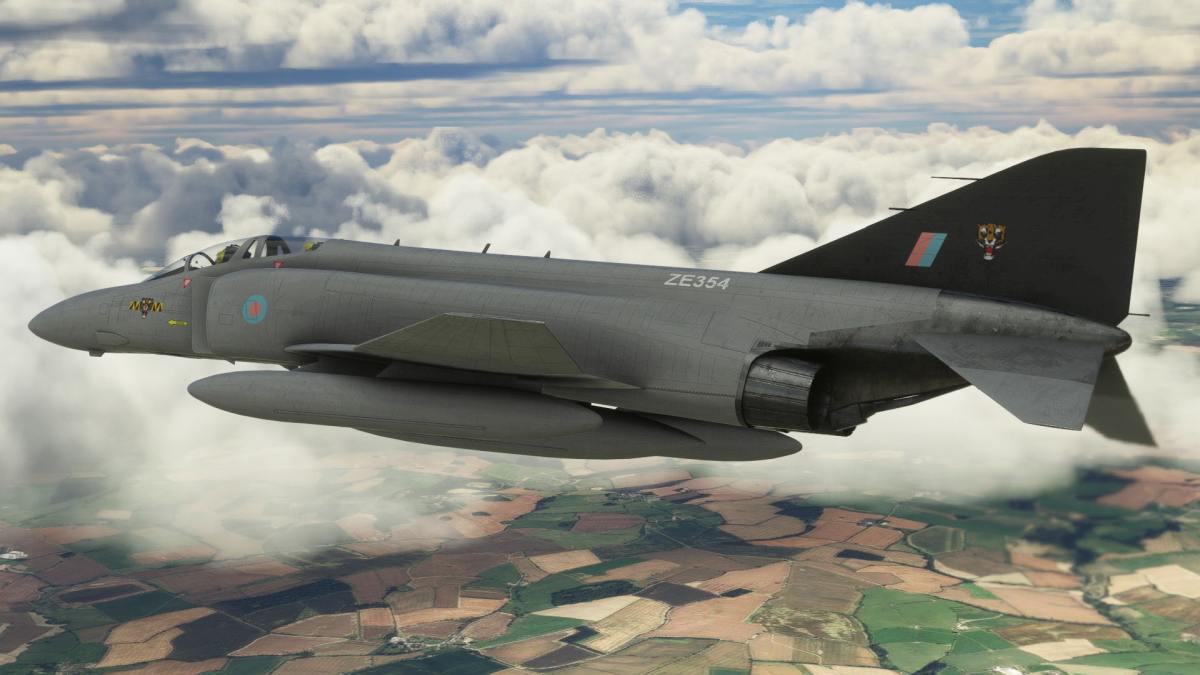 Today third-party developers shared news about add-ons for Microsoft Flight Simulator, including both aircraft and scenery.

We start with DC Designs, which is working on the decals, rivets, and panel lines of its e F-4 Phantom.

The developer will implement the correct mid-air refueling methods for each version, with the upper-mid-fuselage re-fuelling door for the USAF and the nose-mounted probe for US Navy and Royal Air Force.

The F4E variant won’t have the leading-edge slats included in the later variants, as it was in the real world, and DC Designs is planning to simulate the departure stalls the aircraft was known for.

Unfortunately, work on the IAE engines and the new engine model has been slowed down by the war in Ukraine, as the lead developer lives there and they’re affected by frequent lack of power and heating. That being said, work is continuing when possible and an important development milestone was passed yesterday.

“I have not shared many details about the engine model as yet, but we are being ambitious with our goals – and the set of data we’re using to build it is absolutely enormous. This fast lookup algorithm clears a large hurdle in making the implementation possible. We are inching closer to having a prototype flying, but as ever, we will not be providing a timescale for this given the variable circumstances around it.”

The EFB tablet is also being extensively reworked to improve performance, scalability, and maintainability. Future features will include a more robust state-saving system.

Fenix is also engaged in a major visual upgrade to the aircraft, which already looks fantastic.

“Something else we’ve been hinting at is the major visual upgrade that continues along in the background. The art team have been very busy over the last several months almost entirely rebuilding the visual model of the aircraft. It wouldn’t surprise me if we were the first to start active development of an airliner in MSFS back in 2019, before any art or development tools were available. We begun R&D as soon as alpha access was granted, finding ways to port across models, investigating systems, and get a good ‘feel’ for development possibilities. In doing so, we played it pretty safe on the visuals – keeping the polycount and texture utilisation very similar to existing simulator platforms. Now MSFS has mostly matured and stabilised, it’s clear that we ‘undershot’ a little bit on this front, and left a lot on the table. Dubbed ‘V2’ internally for the near total-rebuild, this will be a substantial, and free, upgrade to our A320 product; hopefully making it the benchmark for visual quality and accuracy. We’re not ready to share anything major on this yet.”

Last, but not least, FS Formosa released another package set in Taiwan, including Qimei Airport (RCCM) and Wangan Airport (RCWA), and scenery for the southern part of the Penghu archipelago.

It can be purchased on Simmarket for $12.39 plus applicable VAT.

It includes the following.

Various traditional Taiwanese temples and residential houses can be found at the islands.