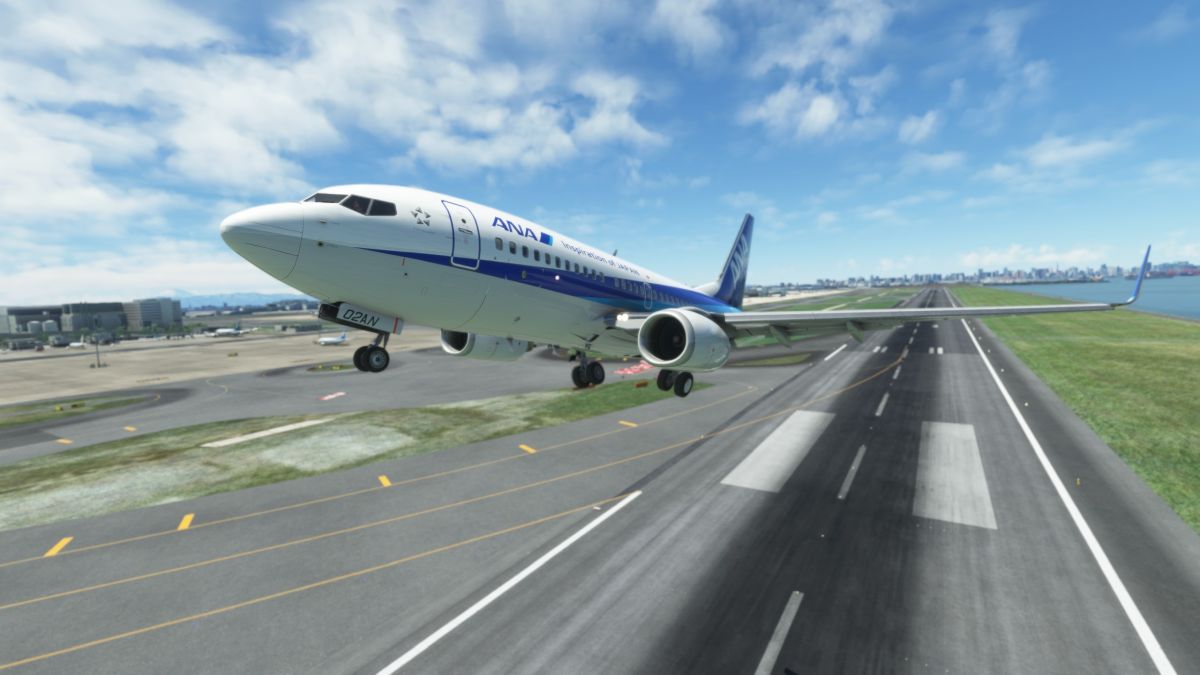 After over a year and a half from its release, Microsoft Flight Simulator has naturally reached a stage of maturation in which advanced airliner aircraft add-ons have completed their usually long development cycles and are finally being released, but their prices may be shocking to those not used to the flight simulation hobby.

Their pricing ranges from approximately $65 to $80, which is higher than the price of the standard edition of the whole simulator ($59.99).

It’s not surprising that many at her first simulator consider these prices excessive, or even outrageous. Yet, there are reasons behind this.

First of all, we have to clarify that Microsoft is not directly involved with the development and pricing of these add-ons. They’re created by independent third-party developers that decide their own pricing autonomously. Microsoft is simply providing the platform and tools for them to operate.

As a matter of fact, the house of Xbox has been extremely generous in providing users with regular injections of free content in the form of airports, scenery, and even aircraft. Later this month, we’re getting a free expansion based on the Top Gun: Maverick movie and another that will add content in Italy and Malta. Even when they have asked for money for paid DLC aircraft, these were much, much more affordable than those we’re talking about today.

It’s important to mention that advanced add-on airliners for this kind of flight simulator aren’t your usual DLC. They’re extremely complex pieces of software that require years of work and research, often across different generations of simulators.

They’re so advanced and realistic that they’re often defined as “study-level,” an admittedly fairly vague definition (and at times tainted by marketing) that indicates that they could even be used to study the systems and procedures of the real aircraft.

In order to get a good example of the complexity I’m talking about, you can take a look at the tutorials above for PMDG’s brand new Boeing 737, shared by real-world pilot 737NG Driver, who takes several hours to take us through the ins and outs of the procedures required for a single flight.

All these complex functions and features, reproduced to this level of realism, require considerable time and resources to develop, so we shouldn’t underestimate the value of the aircraft that we get with the purchase.

Third-party developers are businesses, so of course, they need to compensate their employees for the months and years of hard work. On the other hand, dedicated simmers can easily receive hundreds of hours of entertainment and even learn from these aircraft.

That being said, there is an additional, more subtle reason that compounds the objectively high prices, and it’s hidden in plain sight within the history of flight simulators.

In the early years of the genre, flight simulators were quite popular, especially the Microsoft Flight Simulator series. With all the commercial and technological weight of Microsoft behind them, the installments of the franchise were considered true AAA games at the cutting edge of PC gaming. They received plenty of marketing and regularly appeared on gaming magazine covers when the printed gaming press was still a thing.

Following Flight Simulator 2004, the PC market started to turn, with other genres that used to be more popular on consoles rising to prominence, and Microsoft starting to push the series less and less.

The baton was taken up by other companies, prominently Lockheed Martin and Laminar Research, with the various editions of Prepar3d (which is itself based on the licensed Microsoft Flight Simulator X engine) and X-Plane.

Yet, these companies lacked and still lack either the will or the resources to push and advertise their products as mass-market AAA games, content to serve a small niche of hardcore flight simulation enthusiasts. The inability to keep up with the meteoric technological and graphical advancements seen in the gaming market as a whole also severely limited the appeal of these products among the wider gaming audience.

During that decade, the flight simulation genre became increasingly unpopular, stuck in a small and insular niche of highly engaged but numerically scarce enthusiasts.

As a consequence, third-party developers found themselves having to sell their products, which often took years to make, into an extremely niche market, able to sell only a few thousands or tens of thousands of copies.

The only way for them to survive was to increase their profit margins, turning the add-on market for Prepar3d, X-Plane, and what was left of Microsoft Flight Simulator X into a sort of luxury market where few copies were sold to a small niche of enthusiasts, for increasingly high prices. At that time, it was simply a matter of survival for these businesses.

Now that Microsoft Flight Simulator has yanked the genre out of that restrictive niche and back into the big leagues, many developers are used to the pricing they have applied to their products for a decade, and they’re hesitant about taking the risk to lower it considerably.

This is likely also due to the fact that they may believe that most gamers that have approached the new MSFS as their first simulator wouldn’t be interested in advanced and complex aircraft. There certainly is, within the previously insular (and often a bit elitist) flight simulation community, a misconception that leads to associate the general gamer with someone who plays only Call of Duty or Fortnite, unwilling or unable to approach a higher level of complexity. It’s no surprise that this misconception can and often does rub off onto the developers.

With that point of view in mind, it’s possible that many developers may not expect their sales of advanced and concept airliners to increase exponentially, despite the fact that the overall potential audience has definitely seen an exponential increase. They expect their products to be still stuck in a niche because the majority of the audience may not embrace them.

On top of that, this attitude is encouraged and supported by many veteran flight simulator users (not all of them, of course) who have not experienced anything else than the pricing standards generated by the previous super-niche condition of their hobby. Not only they’re used to paying an arm and a leg for the aircraft they want, but they’ve gotten comfortable with it, and over the years, they’ve been basically conditioned to feel good about being part of some sort of artificial elite. One could possibly argue that a portion of the flight simulation community is affected by a local version of the Stockholm Syndrome as they end up overpaying and liking it.

The idea of the wider audience of gamers as shooter and battle royale players unable or unwilling to enjoy complex entertainment is indeed a gross misconception. Besides the fact that simulation games dedicated to other fields outside aviation are very widespread on both PC and consoles, there are plenty of games that would give even the most advanced airliner add-ons a run for their money in terms of complexity. The strategy games by Paradox Entertainment are an easy and fitting example, and those are quite popular, often selling in the millions.

Unfortunately, in order for this trend to change, we need to wait for developers courageous enough to drop their prices considerably under the psychological barrier represented by the price of the whole simulator.

Selling advanced add-on aircraft at prices closer to the DLC or expansions available for other games, and as such more acceptable to the general gaming audience, would likely grow unit sales by a measure likely closer to exponential than incremental (depending on how far the prices are dropped, of course).

Gamers at their first simulator easily represent the overwhelming majority of Microsoft Flight Simulator users, outnumbering the “old guard” by a massive margin.  The primary obstacle that prevents many of them from engaging with and purchasing high-fidelity add-ons isn’t complexity at all. It’s the pricing that they see as unreasonably expensive.

Embracing them is not only very likely not to hurt the developers’ overall revenue at all but to increase it considerably, creating a win-win situation for everyone involved.

In addition to that, encouraging new users to try more complex aircraft with more accessible prices will make the more engaging and interesting areas of this hobby more approachable and inclusive. This will in turn increase the interest of these users in purchasing even more advanced aircraft, creating a self-feeding virtuous circle from which high-quality developers can only benefit.

Established developers may be a bit too “set in their ways” to do it, so it’s possible that this may come from newer studios, like Fenix Simulations, which is expected to announce the release date and pricing of its Airbus A320 soon enough. Of course, there is no guarantee on whether they’ll take this leap of faith or not, but if new studios less affected by preconceptions don’t do it, the chance that established ones that have been part of a super-niche industry for many years will take the first step is even lower.

We’ll have to wait and see what will happen, but even now, gamers who want to try a more advanced degree of simulation without risking bankruptcy do have options.

The most interesting examples are free mods available for the game’s default aircraft, designed to deepen their level of realism considerably.

Some examples are the A32NX Airbus A320 Neo by FlyByWire, the 74S Boeing 747-800 by Salty Simulations (both are available in FlyByWire’s installer that can be downloaded here), the B78xh Boeing 787 by Heavy Division (which you can find at the developer’s Discord server) or the Working Title CJ4.

The difference with paid add-ons is that these aircraft are in constant development toward increasing levels of complexity. You could think about them as some sort of early access that will remain forever free.

While this means that they’re usually a bit less realistic than the paid ones (at least until they’re finished), they have the advantage that you can learn their more complex systems and procedures gradually as they’re implemented.

More advanced freeware add-ons are in development, like the Embraer E-jets by Ouroboros, the Airbus A380 by FlyByWire, or the McDonnel Douglas DC-10/KC-10 by Aero Dynamics, but those will take longer to become available as they are being developed from scratch, without using default aircraft as a base.

There are also paid aircraft that offer enhanced complexity over the default ones, but aren’t quite so expensive, like the CRJ 700 & 550 package by Aerosoft or SimWorksStudios’ Daher Kodiak 100 if you prefer general aviation. If you like vintage aircraft, you can’t go wrong with the fantastic Boeing 247D and its attractive $20 price tag.

Ultimately, Microsoft Flight Simulator is still a young entry in the genre, so there is still plenty of time for its add-on prices to adjust toward levels that aren’t quite so shocking for novices. It’ll certainly require a degree of courage from third-party developers, but I have faith and believe that those who will embrace the wider audience will be rewarded for it with much higher revenues.