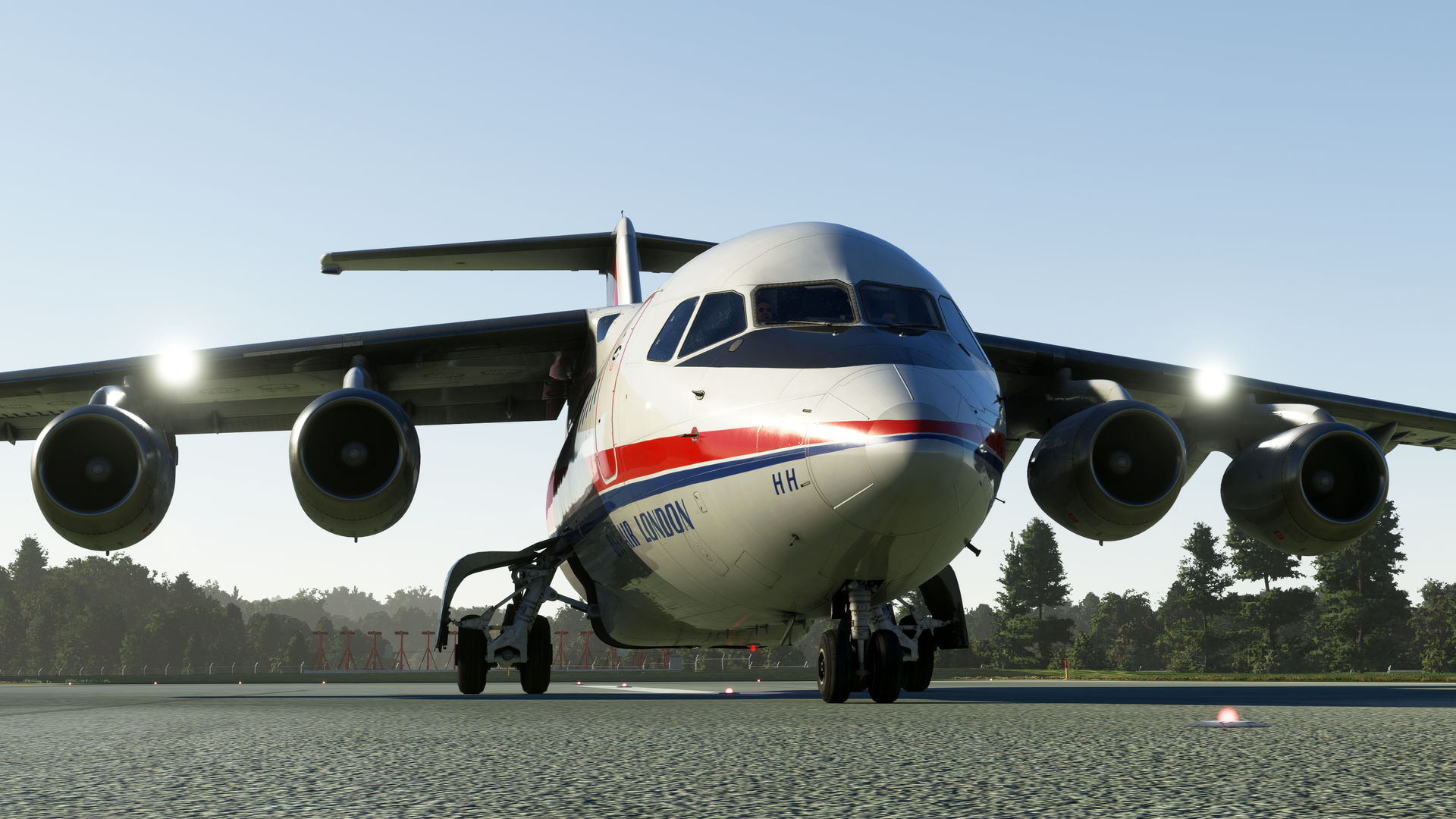 First of all, we take another extensive look at the BAE 146 by Just Flight, over two separate posts following yesterday’s describing the second and third part of a test flight.

The developer also mentioned on Twitter an “educated guess” of six weeks before release.

1st shot – The cockpit is equipped with extensive engine instrumentation but the start-up procedure is logical and quick to master.

2nd shot – With all four engines started, the flaps extended to 18 degrees and ground equipment clear, we can begin our taxi to the runway. The brand new Wwise sound set, complete with over 500 custom sounds, really adds to the immersion!

3rd shot – Unlike most aircraft, we’ll keep the APU running after engine start. We’ll use APU air for the air conditioning and pressurisation until we switch to engine air during the climb. As well as powerful landing lights, the 146 is fitted with taxi, turnoff, wing, logo, strobe and two-intensity level navigation lights.

4th shot – A variety of pilot and cabin callouts can be triggered manually via the EFB tablet and overhead call buttons, or automatically based on the stage of flight and aircraft configuration. A short time after pinging the cabin crew to take their seats for takeoff, they let us know the cabin is secure and set the aft pedestal indicator accordingly.

5th shot – With a wing surface and trailing edge flaps this large, there’s no need for leading edge slats to achieve the 146’s excellent short field performance, ideal for operating from airports like Southampton.

6th shot – Lined up on the runway, we can take a movement to admire the view prior to takeoff. Note that the elevators are deflected upwards despite the controls being at neutral. Another quirk of the 146 is that the control columns are linked to servo tabs on the elevators and ailerons, rather than directly to the surfaces, resulting in various deflections caused by the wind direction and speed until the aircraft has built up enough speed for the servo tabs to bring the surfaces to the commanded position – all fully simulated here.

7th shot – We’re airborne! Here’s a passenger view of the impressive wing and flap structure as we climb over Southampton.

8th shot – Shortly after takeoff we can engage the autopilot. The autopilot modes will be familiar to all pilots and include IAS, MACH, LNAV and CAT 2 approach. The 146 isn’t equipped with an autothrottle but instead something called the Thrust Modulation System (TMS), which is essentially a replacement for the traditional Flight Engineer in helping you to achieve selected thrust settings.

9th shot – With the autopilot now in control and flaps retracted, we can begin a left turn to intercept the Southampton VOR outbound towards Bournemouth.

10th & final shot – We can also switch over to engine air and then shut down the APU. Note that, similar to an Airbus, there is a ‘dark cockpit philosophy’, with nearly all of the hundreds of annunciators remaining unlit unless the pilot’s attention is required. The Master Warning Panel (MWP) on the centre instrument panel will indicate which section of the overhead panel to check, and annunciators on that section will indicate the issue.

1st shot – With Bournemouth Airport now in view to the south, we can get ourselves positioned for the ILS runway 08 approach.

2nd shot – Instrument flood and integral lighting, and the movable sill light fitted to the glareshield are just some of the cockpit lighting options, all fully-dimmable.

3rd shot – We’ll start our descent as Poole Harbour comes into view. The light being reflected off the overhead panel demonstrates the stunning detail that we’re able to achieve in MSFS.

4th shot – During descent we can restart the APU and configure the TMS. Selecting DESC (descent) mode on the TMS ensures that the engine N2s remain sufficiently high to supply the required bleed air for pressurisation and anti-icing. The speeds card is automatically updated based on the current aircraft weight, and clicking on it automatically sets the speed bugs on the ASIs, and the engine instrument bugs to the relevant TMS values.

5th shot – Levelling off at 2200ft, we begin our turn to intercept the ILS. GSL (glideslope) and V/L (VOR LOC) modes are armed on the autopilot, as confirmed by the flight annunciators above the altimeter.

6th shot – Established on the localiser, we can start to reduce airspeed in anticipation of glideslope capture. The flightdeck is equipped with a jump seat whose view is shown here. We’ve included a variety of camera presets for the interior and exterior views.

7th shot – Passengers in front of the wing have a great and unique view of Poole Harbour on the approach.

8th shot – The view from the front isn’t bad either!

9th shot – Another unique aspect of 146 operations is coming in over the fence with the distinctive tail-mounted airbrake extended, providing excellent speed control.

10th shot – Touchdown! The wing-mounted lift dumpers can be extended with weight on the wheels. In combination with the brakes, the 146 has excellent stopping power for short field operations such as London City.

11th & final shot – We end our test flight parked at Bournemouth’s terminal building, from where this roof-top shot was taken. We’ll leave the aircraft in its turnaround state with the brake fans running, ahead of our return to Southampton.

We also get the usual weekly update about the Concorde from DC Designs.

“Big progress this week as work continues on Concorde. We’re getting into the extra features now while also working on improving what is already there. Chief among those has been the addition of interactive points – features such as jetway attachment, ground power, fuel trucks, baggage loading, boarding ramps and so on. These bring added life to any flight in MSFS, and of course also allow the pilot to add their own fuel loads as required. Both forward and aft baggage compartments have been added and animate whenever baggage loading is requested from ATC. Likewise, refuelling ports and the Ground Power Hatch open when those requests are made, with the relevant vehicles arriving and connecting to fuel or power lines.

Flight deck work continues ( it feels quite never-ending sometimes as there is so much to do ) but everything is going according to plan. Full auto-pilot features are now all in place ( including max-climb, max-cruise and others ) allowing full ILS landings and approaches to supporting airports. The flight model is now sublime, perfectly mirroring Concorde’s real-life performance throughout the flight envelope, although it is continuously tweaked as testing becomes more detailed.

There is, ironically, less new stuff to report now that the project is reaching its publication date. A lot of visual improvements will be brought to the exterior model ( the engines now have their PBR to match the fuselage ) over the coming two weeks as I start to really polish the appearance of Concorde while we continue flight testing. Interior lighting is one area that I’m looking forward to seeing tackled, especially as the current weather is somewhat gloomy – it all adds to the atmosphere.”

Moving on to airports, we get the announcement for FeelThere that a new rendition of Dubai International Airport (OMDB) in the United Arab Emirates is coming soon.

The airport is now complete and has been sent to Microsoft for review and release in the official marketplace.