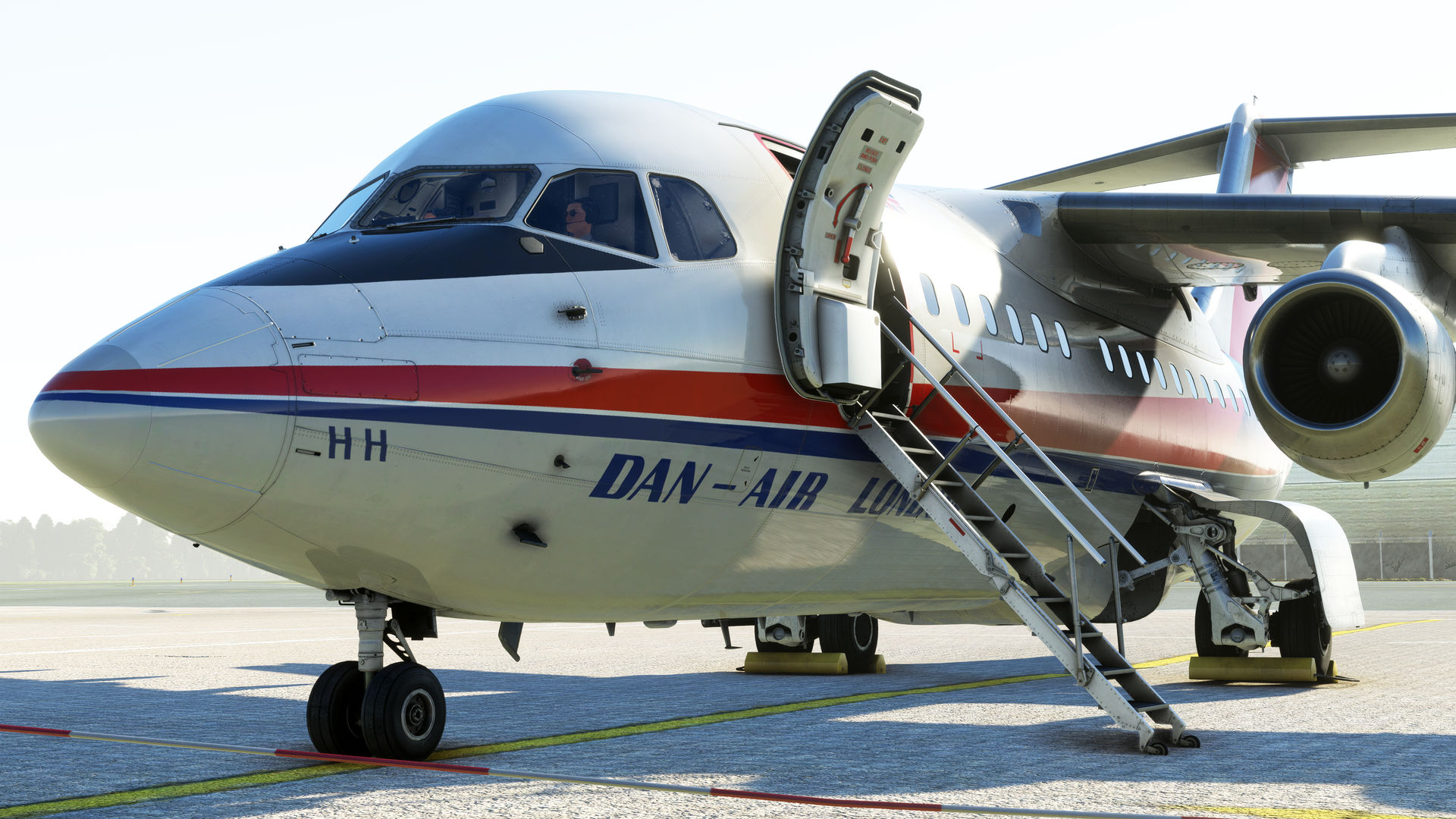 Third-party developers had a couple of reveals about upcoming aircraft add-ons for Microsoft Flight Simulator.

Just Flight released new screenshots of the BAE 146 alongside a detailed description of the pre-flight procedures.

This is part one of three, in which the developer will take us through a test flight with the venerable four-engine regional jet. More will come tomorrow.

Here’s a new Development Update direct from Project Lead Martyn Northall. This update sees Martyn undergoing a short test flight. He’ll run you through it via screenshots and some text for each shot. Given the length of this update we’ll split this into three parts. This will be part one. The others will follow tomorrow. Over to Martyn…

Hello. I’m going to take you along on a short test flight from Southampton (EGHI) to Bournemouth (EGHH), discussing some of the recent work and additions to the aircraft along the way. Testing has been underway for several months now, with this flight featuring the latest beta build. The aircraft systems are fully operational but will continually be improved with reference to all the FCOMs and real-world 146 pilot input. Just like our Hawk T1, the MSFS version of the 146 will be a significant upgrade not just in terms of the stunning visuals as shown here, but also the systems depth and realism.

As the Project Lead and coder, I’m often carrying out a very specific task, such as operating a system whilst parked on the ground, so it’s a welcome break when I’m able to fly a full A-to-B route, even if it’s a mere 21nm!

One of the things I love about MSFS is the ease with which I can fly using real-world weather, seasons and times, providing the opportunity to test our aircraft in a wide variety of conditions. So let’s get started…

1st shot – We start today’s flight on a winter’s afternoon at Southampton’s small terminal building, in front of our cold-and-dark 146-100.

2nd shot – With door 1L open, we can extend the integral airstairs and climb aboard. They extend under their own weight but require hydraulic pressure from the yellow system to retract. One of my examples of the versatility offered by the 146!

3rd shot – Entering the very spacious flightdeck, those hundreds of controls and gauges can be an intimidating sight at first, living up to its reputation as a mini Jumbo! Despite all that detail, performance (FPS) remains great.

4th shot – Jumping into the Captain’s seat, we can use the EFB tablet to quickly configure the aircraft doors, payload and ground equipment.

5th shot – We’ve recently added our own chocks and GPU for more realistic ground operations. The GPU exhaust heat blur is one of many effects that we’ve included.

6th shot – Turning our attention to the huge overhead panel, we can get the electrical system online, first from the two batteries and external AC, and then the APU. Note the AUX tank annunciator lights on the fuel panel – these are another brand new feature for MSFS, extending the range of the aircraft, particularly useful for VIP operations.

7th shot – The overhead panel doesn’t stop there! Moving to the upper overhead, we can configure the air conditioning, external lighting and hydraulic systems. We can set a low cabin altitude for the pressurisation system given our 6000ft cruise altitude.

8th shot – We can now configure the glareshield, radios and navigation instruments for our departure. The 146 is equipped with two NAV and two ADF radios, RMIs, HSIs, a very capable autopilot and FMS/GPS, offering a mixture of old and new navigation methods.

9th shot – Taking advantage of the excellent visibility from the flightdeck, we can monitor the pushback ahead of engine start.

10th & Final shot – With pushback complete, we will start engines 4, 3, 2 and then 1. The high-wing, four engine configuration makes for a very interesting aircraft to operate, especially given its small size relative to similarly configured aircraft like the mighty C-17! The extremely sturdy landing gear is also shown here, ideal for rough field operations.

Next, we hear from Lionheart Creations, which posted new images of the fairly unique turboprop designed by Bill Lear LearAvia Lear Fan 2100.