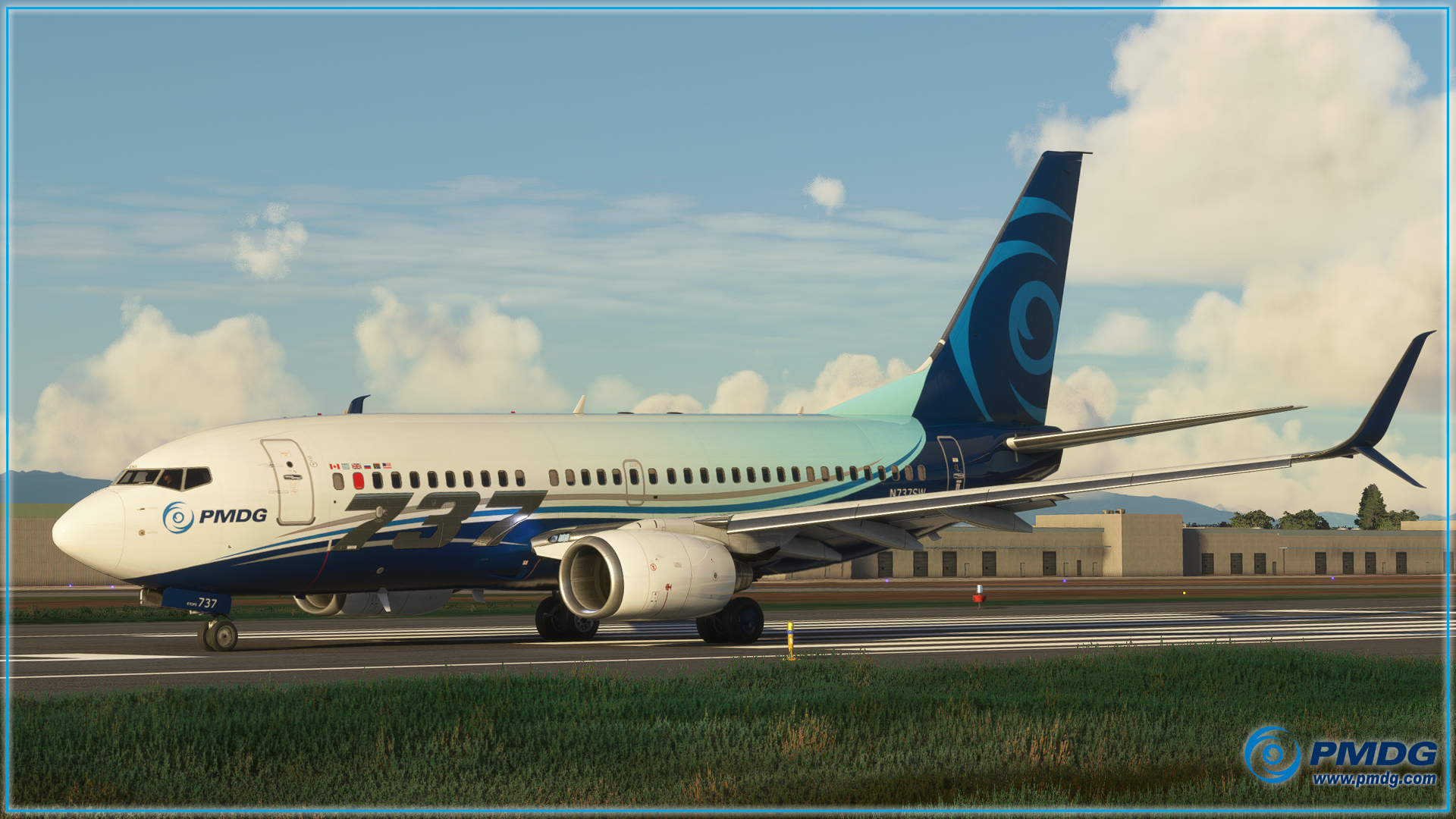 Today third-party developers had a lot of goodies to share about upcoming aircraft add-ons for Microsoft Flight Simulator.

First and foremost, acclaimed developer PMDG finally decided to pull the Boeing 737 out of the hat, showcasing some really fetching screenshots on top of an extensive development update.

If things go according to plans, it should release this quarter. Without further ado, I’ll let PMDG boss Robert Randazzo take the stage and deliver the speech. You’ll find the screenshots under the wall of text, so don’t go anywhere.

“As we start 4Q21, we finally feel that the PMDG 737 for MSFS is beginning to look and feel like a product rather than a science experiment gone awry. Developing the 737 on the MSFS platform has been a difficult road thus far, in part because the platform is so very different from what we are used to, it is still very much in motion and we are heavily reliant upon the Asobo development team finding time in their already jammed agenda to implement the things that we need to get the airplane operable within the sim. Often what we need done doesn’t line up well with their development agenda and this leaves us working to find ways to ensure functionality while simultaneously prioritizing our requests to get attention to important items without clouding their environment with unrelated or meaningless requests that might only be beneficial to PMDG and not the platform as a whole.

When we announced back in August 2020 that our schedule guidance for the 737 was looking like “late 2021/early 2022” it made me exceedingly unpopular in some spaces- but here we are in 4Q21 and I remain steadfast that our decision to speak truthfully about our schedule expectations was the right decision- in spite the political blow-back it created. Earlier in the summer we were making really good progress through deliverables, but things slowed to a crawl in July/August in part due to vacation schedules in Europe and in part due to the massive, unexpected refactor of the platform so that the XBox community could be brought into the fold.

As September has progressed, we have seen an expected increase in development speed and as of this moment our schedule guidance is that the 737 will release to you in the current quarter. There are still some risk factors we are concerned about because they require changes to the platform, but they are mostly visual artifacts that affect the look of certain display drawing aspects and we are comfortable that Asobo can fix those post release if they don’t actually get to them prior to our release… They are nuisance, in other words. I will show you a few examples when we get around to late beta testing if they haven’t been addressed already by Asobo.

So lets get into the meaty bits, shall we? (DANGER: The following images are all in-development images taken with a current alpha build. They may reflect some incomplete pieces and items still in development/adjustment.)

For this update, I am going to walk you through our expectations for the product’s shape and form, with some images of the 737’s external model mixed in so that you have something fun to look at! For all of the complaining you will hear me transmit about the platform being in motion and the slow delivery of development tools, etc- you won’t hear me complain about how the platform LOOKS. This is evident when you start taking screen shots for a presentation like this one:

The images I am sharing with you hear are an in-development model upon which we are still resolving some small alignment issues in the texture mapping, as well as cleaning up the various reflectivity and surface mappings to ensure that they work correctly and capitalize on the great visual capabilities of the MSFS platform. In this image you can see how well the reflection already carries from the darker paint surfaces, showing you the reflective effect of warped surfaces, compound curves and the like.

Likewise, looking at the upper wing surface, you can see a similar quality of reflection. In a static screen capture, it looks exceptional, but it looks significantly better when you see it in motion within the sim. The light mapping and surface material tools that Asobo has given developers are truly spectacular, and they allow us to work really without having to use the traditional tricks of the trade to hide imperfections and failures in the rendering model. You can see this is very evident in the quartering image below:

The beauty in this shot takes place up under the wing leading edge, where you can see the light diffuse and reflective qualities of the various metal surfaces that make up the underside of the leading edge, including the bleed air vent holes and the differences in the painted and polished surfaces.

In the next image you can see that we have begun to implement the heat blur effect from the engines and while this looks pretty neat in a still image- it looks truly spectacular (specular? hmmm) in motion within the sim. When we get to the point of doing video previews for this airplane, we shall be sure to show this off as it is a very neat effect within the sim.

This image also gives you a good look at the underside of the wing and the treatment of rivet lines and fasteners through the aircraft surface, along with their impact on reflection and shadowing.

I know a few of you in this forum have worked the ramp, or are still actively working the ramp (i’m looking at you, Alex) and this image probably makes you want to duck instinctively while holding your ear protection to keep it from sailing off your head- but you can almost smell the heat blur in this image, can’t you?

To wrap up today’s update, I’ll share this image with you, giving you the the Full Monty of the 737-700 happily ensconced within Microsoft Flight Simulator. I have intentionally withheld images of the flight deck because we are still fitting out a few items there, and working to resolve some systems implementation concerns through the use of customized tools and images within the cockpit. These would look confusing to you, and might likely cause a distraction (“yes, we know that display artifact isn’t supposed to be purple, yes we know that those coordinates aren’t normally drawn on screen” etc) and we want to get through that process before we start showing the business office part of the simulation to you.

As of this morning’s dev team meeting, Alex is fully engulfed in working on cockpit lighting, which will work similarly to how it was implemented in the DC-6 because Asobo has given us a really nice lighting model within the sim. I can’t wait for you to see that- as it is really something spectacular when you get into a darker environment and things begin to glow “just so” in the cockpit.

As always- when we start showing you a product in development, it generally means that we are moving confidently in the direction of a release plan. This product still needs to go through comprehensive beta testing- but since we don’t have adequate debugging tools in MSFS, we are working very hard to ensure that we don’t make major code changes between NGXu and the 737 for MSFS- so this enhances our beta testing speed a bit once we get there.

Some folks have been asking about whether X function or Y function will be present and we are intentionally ignoring all such requests at this time. There are a number of things that we know don’t work properly at this particular moment, but there were 10x as many things that didn’t work properly back on 01JUN, and for us it is a matter of working through the task list one item at a time, and then taking any shortcomings to Asobo for guidance/input/adjustment. It is a long and slow process and I don’t want to have to continually update the list of things that didn’t work yesterday that work today- so we will talk through any functionality differences between the P3D and MSFS versions at a later date once we know for sure which items cannot be implemented.

We are also working through our “options” list and working to preserve the very rich list of optional items that you can have in your 737. We are also adding a few more (satellite antenna locations and that sort of thing) that reflect changes in the worldwide fleet since NGXu was released two years ago.

I will have more information for you on product makeup and pricing in a future update. We have largely settled that in already as we are taking a different approach to product structure in the MSFS environment. I’ll have more details on that when the time is right, but our goal is to make it easier and less expensive to add a PMDG airplane to your MSFS hangar.

Okay- I am eager to show you the flight deck- but we have a bit more work to wrap up before we do that… so don’t wander to far off!”

Next comes Aerosoft, showing some severe icing on the de Havilland Canada DHC-6 Twin Otter (which has already been confirmed for Xbox). It’s currently entering its beta testing phase.

We then take another video look at Just Flight’s Hawk T1 trainer, showing the hydraulic system and lighting.

Moving on to fighters, IndiaFoxtEcho provided another look at various liveries for the F-35 Lightning II, alongside details on its plans for the aircraft:

“One of the coolest features of Microsoft Flight Simulator is the global photoreal coverage…and the F-35 feels at home in many places!

From Alaska to Mount Fuji, the plan is to provide at least one livery for each of the services and nations that have adopted AND flown the F-35 so far – that is United States, United Kingdom, Netherlands, Italy, Norway, Australia, Denmark, Japan, Israel and South Korea. We will not include fictional liveries – even if they are from countries who have decided the plane in real life, but have not received it yet. However a paintkit will be available at the release.
Note that our liveries are, at the moment, based on earlier blocks – more recent aircraft have a more uniform (and apparently smoother) finish – so that the rendition in these images is not correct for some countries.
If time allows we will try to recreate the newer finish and maybe include some special colors… but this is not confirmed yet.

Speaking of time – we have not yet completed a test build, but we are still confident that the package will be ready before the end of October – HOWEVER, given that Sim Update 6 will bring some changes to the flight model (and to other important areas) we will not release it before proper testing.”