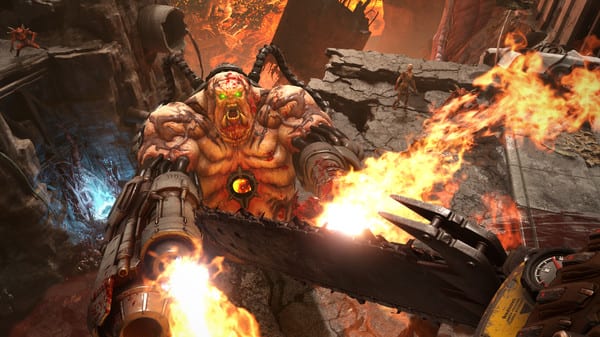 We are still one week away from Doom Eternal’s official launch on March 20. That means only one more week until we can finally get our hands on all that demon-slaying action that comes along with a new Doom release. Until then, this Doom Eternal launch trailer will have to sustain us.

Early on in the trailer, we get a look at the Combat Shotgun tearing apart an Arachnotron. It only gets more brutal from there with previews of classic weapons like the BFG, Chainsaw, Rocket Launcher.

We also see tons of different demons including Barons of Hell, Cacodemons, Pain Elementals and I also caught a glimpse of a demon that appeared to resemble the Icon of Sin. The diversity of demons in this trailer is off the charts.

The trailer ends with the Doom Slayer standing triumphantly on a pile of defeated demons as he holds The Crucible sword in his right hand. A wall of awards and praises surround our hero as lightning flashes in the background.

You can pick up Doom Eternal when it launches for PS4, Xbox One and PC on March 20 and later this year on the Nintendo Switch. Don’t forget to watch the Doom Eternal launch trailer below to see this game in all of its gory glory:

If this Doom Eternal launch trailer wasn’t enough for you, then luckily we have tons of other coverage on this game. Check out our guide about when the game unlocks for digital downloads so you can get into the ripping and tearing fun as soon as possible.

If multiplayer is more your thing, then check out this info on the one v two battle mode. Also, check out more Doom videos like this TV commercial or this story trailer that shows off even more ripping and tearing fun.