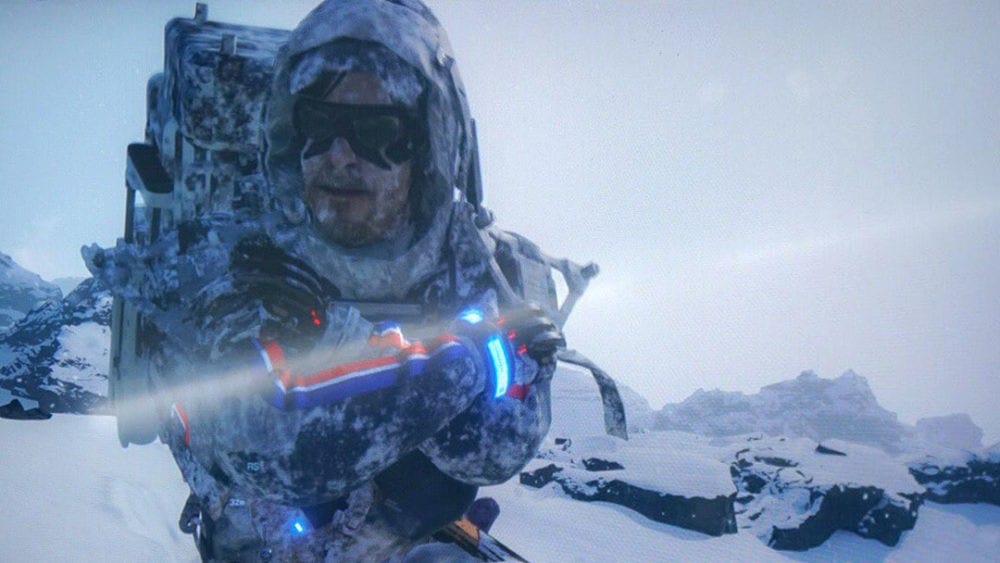 Hideo Kojima is continuing to trickle down images of his upcoming game Death Stranding, and often they showcase specific elements of the game’s gorgeous graphics powered by Guerrilla Games’ Decima Engine.

Today, we get two new images, and they both show off interesting details.

The First image shows the protagonist Sam Bridges as he sits in the snow, half-covered by it. Not only the snow attaches to his suit, but it appears to deform as he walks through it. His posture is also quite appropriate for the cold environment.

Incidentally, it may seem like Sam is actually walking through the snow, but he’s sitting. This can be noticed due to the “stand up” button prompt.

The interesting points of the second image are perhaps more subtle. First of all, we see a beautiful sky with a very heavy cloud cover. Its translucency allows for some sunlight to shine through, and we can see a snowy mountain in the background, partly covered by the clouds. This is actually the first time (to my knowledge) in which we’re provided such a good view of the sky in Death Stranding.

There is also one of those black “strands” that we have seen often in trailers, and Sam appears to be completely covered by the familiar black goo.

If you want to know more about Death Stranding, you can take a look at the latest English trailer, the previous one, and its Japanese version with additional footage and a different song.

You can also take a look at another recent gallery of beautiful images, and a second one, more showing the first images in color, another showing how you’re prompted to rest and sleep in the game, one focusing on diverse environments, and the latest showcasing beautiful water and more.

Recently, we also saw the official box art for the first time and there isn’t much to wait for another reveal, which will happen just before Gamescom.