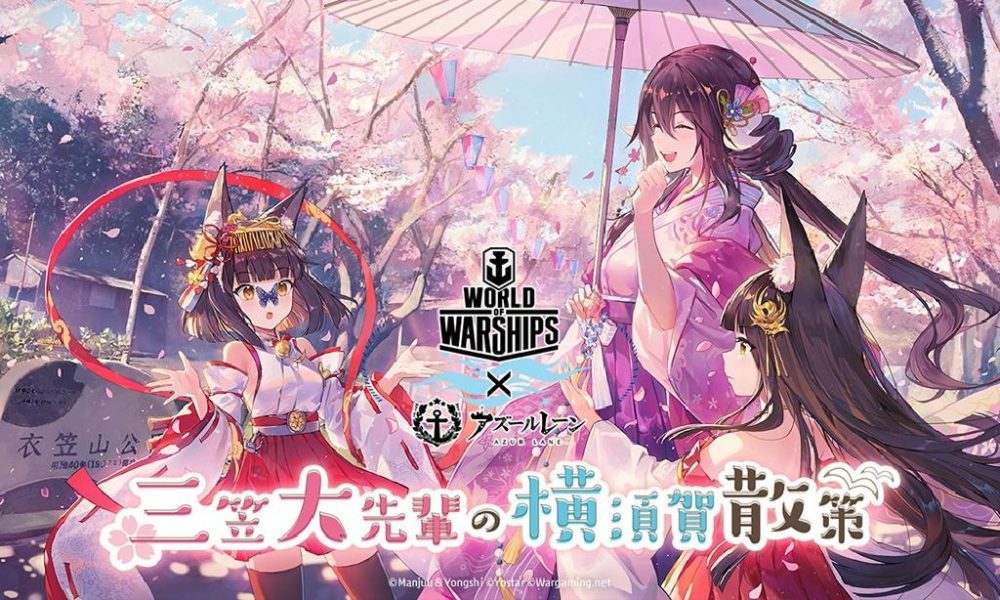 Azur Lane and World of Warships players have experienced the collaboration between the two titles with in-game events, but the crossover extended to the real world.

Starting in April and until tomorrow, May 26, content from the two games invaded the port town of Yokosuka, in the Japanese Kanagawa prefecture, a little more than an hour away from Tokyo by train.

Since most of you don’t live in Japan and likely didn’t get the chance to experience the event, yours truly took a train from Ikebukuro station this early morning, and after a brief stop in Yokohama, reached Yokosuka Chuo station on the Keikyu Line.

Incidentally, today the streets of the city were livened up by a local festival, which made things even more interesting (and rather delicious).

The first stop was the Yokosuka Tourist Information Center, where I was welcomed by the first glimpse of Azur Lane artwork and was presented with a pamphlet including an explanation of the event, a handy map, and room for eleven stamps representing some of the game’s shipgirls.

The event is, in fact, a stamp rally. Stamp rallies a massively popular activity in Japan, prompting visitors to collect stamps in various locations simply for the fun of collecting or to win prizes and goodies.

It’s not surprising that the Japanese love this kind of event so much, considering that they’re a whole lot of fun.

This specific event involved several local shops, requiring a purchase of at least 500 yen to receive a stamp and an Azur Lane bookmark representing the shipgirl associated with each location.

Yet, before diving into the shop exploration, the next stop was inevitably the Battleship Mikasa, the flagship in the Russo-Japanese War between 1904 and 1905, and the only remaining pre-Dreadnought warship in the world, now converted into a museum ship.

She is also the inspiration for Senpai Mikasa, the super-popular shipgirl from Azur Lane acting as the poster-girl for the whole event.

Occupying two rooms within the steel bowels of the mighty warship, I found lovely exhibition featuring artwork from both Azur Lane and World of Warships.

You can see all the images below.

Incidentally, the exhibition was also the place where I got my first stamp, obviously portraying Mikasa herself.

After visiting the ship, it was time to seek some of the shops providing more stamps. Many of them were cafes and bars, offering special menus inspired by their respective shipgirls.

They also proudly displayed plenty of Azur Lane imagery, which was alo all over a local Shotengai (shopping street).

In the gallery below you can see many of the shops, including a delicious menchikatsu (ground meat cutlet) plate at grill bar named Yokosuka Shell and inspired by Independence, and a massive parfait at Kan Mania Yokosuka inspired by Nagato.

At the end of the day, I had managed to collect five stamps (Mikasa, Independence, Nagato, Hiei, and Mutsu). All I had left to do was to return to the Tourist Information Center to receive my final prize.

Five stamps were enough to get a lovely clear file portraying Mikasa. Collecting all eleven would have provided me with a second clear file and an acrylic Mikasa charm, but there simply was no time to do it all.

Incidentally, one of the shop owners told me that all the stores besides one had already run out of bookmarks (it was the second-to-last day of the event, after all), so I managed to get only the one with Independence.

This is certainly a testament to the success of the event and the popularity of Azur Lane in Japan. Kantai Collection seemed to have no rivals, but Yostar’s game appears to have brought a breath of fresh air to the whole shipgirl genre.

I paid close attention in the stores I visited, and nearly all of the customers were fans armed with stamp-gathering pamphlets. I’ve seen a veritable army of ladies and gentlemen from their teens to senior age (the crowd was much more diverse than I expected, actually) collecting shipgirls and enjoying local products and hospitality.

If you want to know more about the games involved, Azur Lane is currently available for iOS and Android, while a PS4 action JRPG titled Azur Lane: Crosswave by Compile Heart will launch on the Japanese shelves on August 29. A western release has recently been announced for 2020.

World of Warships is currently available for PC. A separate console version with quite a few differences named World of Warships: Legends recently released for PS4 and Xbox One.