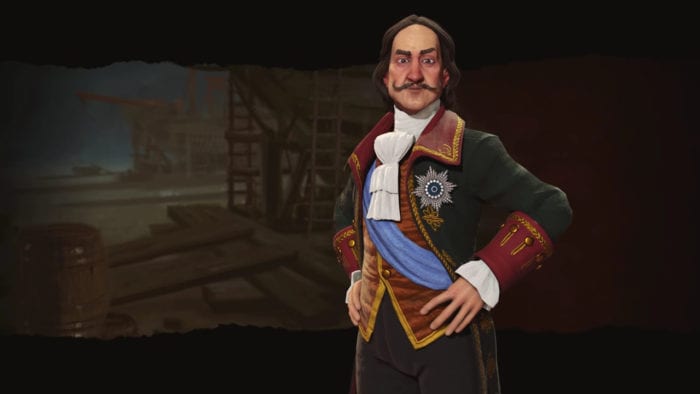 The newest First Look trailer for Civilization VI shows off the Russian civilization and its leader, Peter the Great. Peter, who replaces Catherine from Civilization V, is famed for modernizing Russia using Western systems and touring Europe during the Age of Enlightenment.

Peter’s penchant for modernization is reflected in his ability, The Grand Embassy, which allows Russia to receive extra Science and Culture from trade routes to more technologically advanced civilizations.

Russia’s special ability gives it extra territory when founding cities. This gives Russia a major boost in terms of land acquisition, reflecting its status as the world’s largest country by area. Russia loves the cold too, and gets extra faith and production from any Tundra tiles in its possession.

The classic Cossack remains the unique unit for the Russians. Apart from being more powerful than the regular Cavalry unit it replaces, the Cossack can move after attacking. Finally, Russia’s unique district is the Lavra, which lets you snag an extra tile if you use a Great Person in the city associated with it.

Playing as Russia seems straightforward: you get plenty of land, and being at the cutting edge of scientific research is not necessarily a priority, allowing you to focus your efforts elsewhere. Not a particularly bad choice for players intent on grabbing as much land as possible.

Sid Meier’s Civilization VI launches worldwide on Oct. 21 and will be available on Windows, Mac, and Linux. Recent First Look trailers for the game showed off the Sumerian, Roman and Greek civilizations for the game. You can find out if your computer can run the game by checking out the system requirements here.