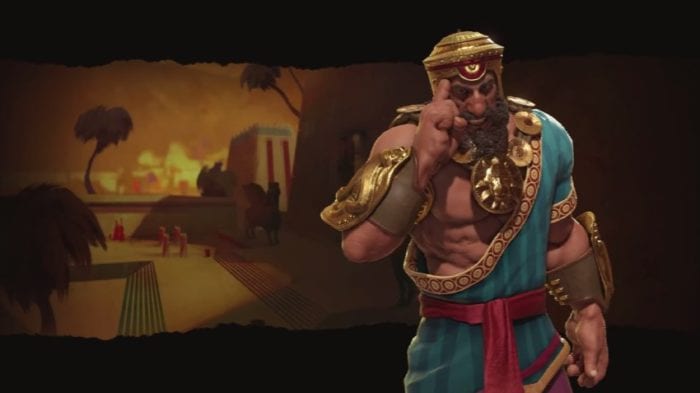 In the latest of Civilization VI’s introduction videos, we get a detailed look at Sumeria and its legendary leader Gilgamesh. As the video states, we actually don’t know if Gilgamesh was a living person or a legend, but he was the hero of history’s oldest known work of literature.

Sumeria is a civilization that benefits greatly from a strong start, and it comes equipped with an exclusive unit and building to do just that. The War Cart is Sumeria’s unique unit available right off the bat, and it’s incredibly strong for an early game unit suffering no penalties against spearman or anti-cavalry units. It also gets extra movements if it starts on open terrain.

The Ziggurat is Sumeria’s exclusive building, which is also available right at the start of the game. If this building is built next to a river, it will provide you with both science and culture. However, you cannot build a Ziggurat on a hill.

Sumeria also functions as a great ally to have in war, as Gilgamesh is a loyal ally that will reciprocate friendships. His ability also allows you to share pillage rewards when fighting a joint war, with the closest allied unit up to five tiles away. Take a look at Sumeria’s full introduction down below.

Which civilization do you plan to conquer the world with? Leave a comment below and let us know.