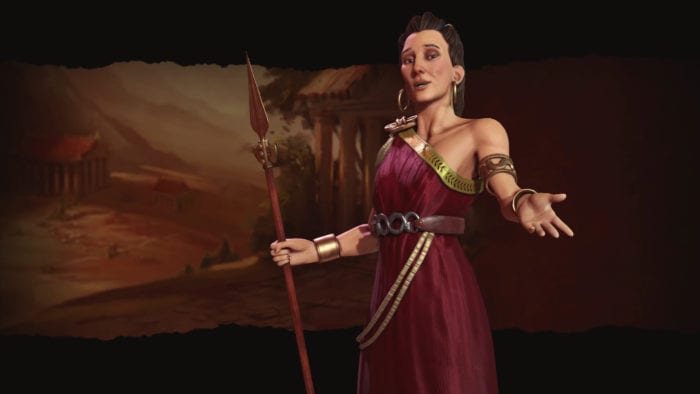 While we’ve already had a First Look trailer for the Greek civilization in Civilization VI, 2K Games has released another one, this time showing off a second Greek leader: Queen Gorgo of Sparta. The wife of King Leonidas I (yes, the one from 300), she was renowned for her wisdom and counsel. This trailer also confirms that Civilization VI will feature multiple leaders per civilization, a returning feature that was skipped in the previous game, Civilization V, which had a single leader for each civilization.

As leader of the Greeks, Gorgo shares many elements with the other Greek leader, Pericles. Specifically, Gorgo retains the Acropolis as a unique district, the Hoplite as a unique unit, and Plato’s Republic as the civilization ability.

The difference lies in Gorgo’s unique leader ability, which allows her to gain culture every time her troops defeat an enemy unit. By contrast, Pericles’ special ability allows him to gain culture for every city of which Greece is the suzerain. Regardless of which leader you choose, the Greek civilization remains geared towards generating lots of culture. While Pericles takes a more diplomatic route to that goal, Gorgo’s is a decidedly more warlike approach.

Civilization VI releases worldwide on Oct. 21 for PC, Mac and Linux. The game features 19 civilizations at launch, all of which have now been revealed through First Look trailers. At launch, Greece will be the only civilization represented by multiple leaders. For other civilizations, additional leaders may be added through DLC and expansion packs, over time.

Recently revealed civilizations for the game include Russia, Sumeria and Rome.