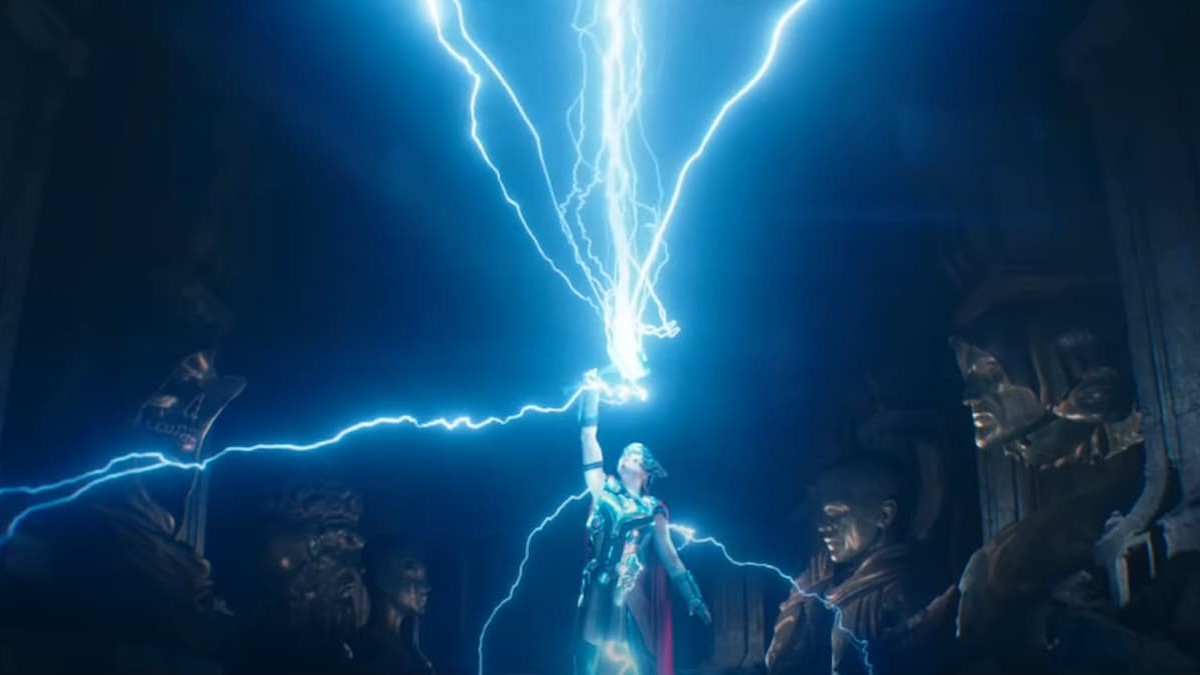 Wondering about the faces of statues in Thor: Love and Thunder’s Gates of Eternity? We’ll help you unveil their identities by analyzing the trailer and the fight against Gorr the God Butcher. So, here’s a full breakdown of every figure within the latest film.

If you were able to catch a few notable faces within the Gates of Eternity, you might have been surprised to see multiple cosmic beings that rule over the universe. Find out who makes a brief appearance in the newest journey for Thor and the rest of the gang.

One of the first statues we see during the battle against Gorr the God Butcher, is Eon, a cosmic being with the power of time. Like all of the gods in this list, he has existed for billions of years since the universe first came into existence. He was also in many comics of the Marvel universe, such as Captain Marvel and Quasar.

In the comic Quasar Issue 2, Eon details his origins and indicates that he is the offspring of Eternity, the Cosmic Axis, and time. His central role is to appoint a “Protector of the Universe,” with his first one being Glakandar, a mysterious member of the Stygian race.

There isn’t much confirmed about Eon’s existence in the Marvel Cinematic Universe; the only known reference is the portrayal we see in Thor: Love and Thunder.

When examining the film’s trailer, you may have noticed a hooded skull face. This statue is none other than Lady Death, also known as the personification of death itself. She is the reason decay and extinction exist, including her abilities of shape-shifting, immortality, and possession.

As the counterpart of Eternity, Death has been through quite a few adventures due to her willingness to seek out conquests and destruction. For example, one instance shows the cosmic being trying to kill Dracula by manipulating humans, while another features a storyline of Thanos falling in love with her and destroying universes to win her over.

Lady Death was meant to be in the Infinity War timeline of the MCU, but the Russo Brothers had to remove the idea when the story arcs were already at total capacity. In an interview with Insider, they expressed the importance of the character in Thanos’ journey and talked about how they only had enough time to show the relationship between him and Gamora.

Since the existence of the multiverse, The Living Tribunal has roamed around the universe to maintain balance, even if it means wiping out entire civilizations in the process.

His most notable feature is his three cloaked faces, each representing a different kind of personality: Equity, Necessity, and Vengeance. There is also a fourth face that has not yet received its form; however, he suggests that it should be connected to Stranger, another mighty force with the powers of strength and wisdom.

The Living Tribunal has appeared in Doctor Strange in the Multiverse of Madness, during the scene where America Chaves and Stephen Strange pass through a realm with statues of the character.

Marvel’s What If…? first showed us The Watcher as the all-knowing observer of the entire universe, and now he returns in Thor: Love and Thunder.

In the television series, he acts as a guide for the infinite realities mentioned throughout the show’s timeline, such as an alternate dimension where T’Challa is Star-Lord and one where Thor is an only child. Then, we see the character again in Loki, but this time as Kang the Conqueror, a counterpart of The Watcher created by Sylvie when she kills him in her specific realm.

Loki Season 2 will indeed have more about this character, with the possibility of him reprising his role in What If…?

The collaboration of Infinity and Eternity has produced the very existence of time and space. Because Thanos was obsessed with the Infinity Stones, he regards the cosmic being as the best, in spite of other astral entities like One Above All, Stranger, and Zeus.

According to the comics, the Asgardian King Odin acquired a piece of her powers by using a bit of tiny silver. Unfortunately, the component was stolen by the Goddess of Death, Hela, resulting in a threat to the universe.

The only time we have previously seen Infinity was during the Temple Vault scene in Guardians of the Galaxy, featuring the art of the Infinity Stones created by Entropy, Infinity, Death, and Eternity.

While Thor fights to protect the children against Gorr, a statue of Arishem the Judge breaks apart and almost falls on the young group of Asgardians.

You may have recognized this character as the Celestial Judge who commands the Eternals. In the film, he is responsible for creating the Deviants and destroying multiple planets through the cosmic event, the Emergence.

Because Arishem has stated that he will return to judge Sersi and the rest of the Eternals, he will likely play a more significant role in the next film.

Of course, Eternity had to have a statue of himself in the Gates of Eternity, reconstructed by Gorr in the latest film.

In the God Butcher’s mission to murder all-powerful beings, he seeks to find Eternity, primarily because of the entity’s wish-granting capabilities. Besides this skill, the powerful being also has unlimited powers within the universe and vast knowledge of everything and everywhere, similar to the Watcher.

Now that he has been introduced to the MCU, it is unclear if Eternity will be coming back in future installments. However, he did still significantly impact the storyline of Love and Thunder, so it’s possible for him to use his techniques in a forthcoming film or TV series.

That’s everything you need to know about all Thor: Love and Thunder Eternity Statues. Before you go, check out our guide on who played Hercules in the film and feel free to peruse the relevant links below.