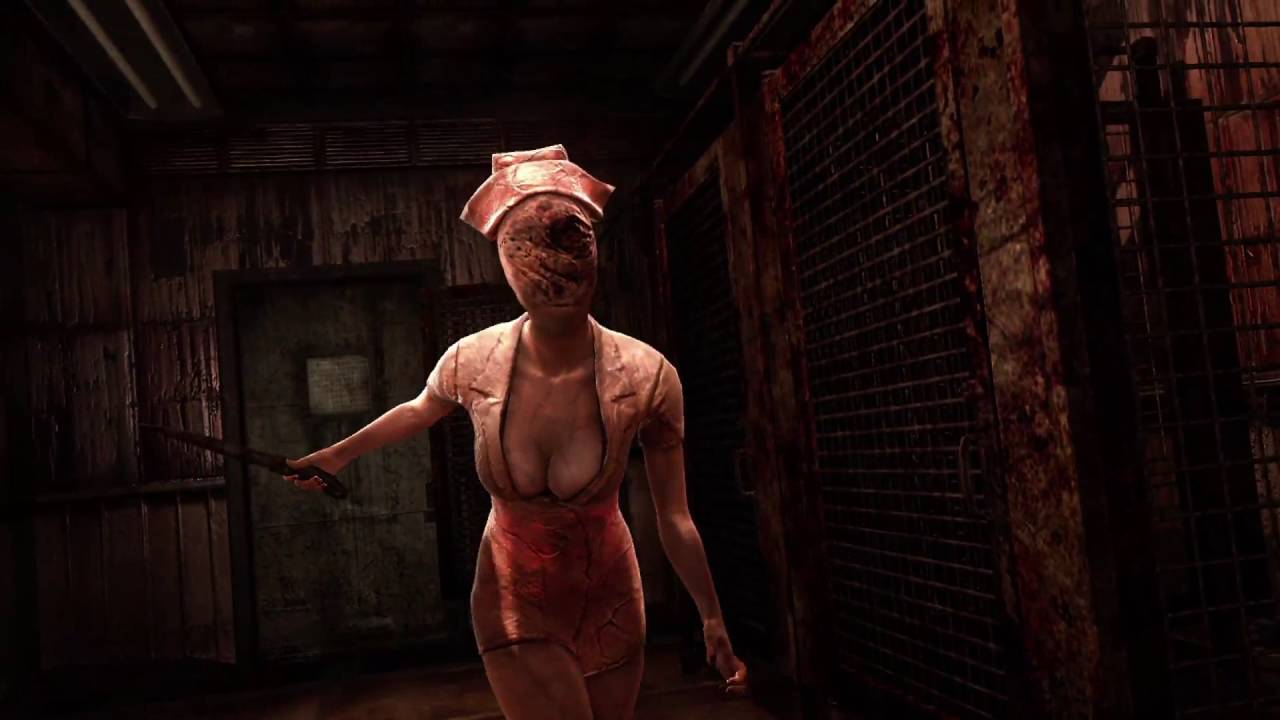 Though the scariest thing of all is having to deal with life’s myriad challenges as we grow older and older, the next best thing is scaring yourself silly from the comfort and safety of your living room with a well-crafted horror game. With that in mind, we thought that now would be a good time to run down five iconic horror game franchises that are pure nightmare fuel. So, why not come join us… if you dare!

Everything about the game’s atmosphere and tone has this disturbing and otherworldly David Lynch-esque quality to it. Whether it’s the tragic and emotionally traumatizing story, dark imagery and eerie symbolism of its creepy monster designs, or the legendary soundtrack from veteran audio maestro Akira Yamaoka, there’s a helluva lot to love about Team Silent’s 2001 pièce de résistance. (There’s also a lot to love about Christophe Gans’ movie adaptation, but I digress.)

Of course, while Silent Hill 2 may be the creative zenith of the entire series, 1999’s PlayStation 1 debut and 2003’s Silent Hill 3 are both highly regarded entries in the franchise as well. That said, if you’re new to the series and you’re looking for any overlooked games you may have missed, we’d happily give a shoutout to Silent Hill 4’s claustrophobic locked-in-your-apartment parable, as well as Silent Hill: Downpour’s criminal-turned-good redemption story and Silent Hill: Homecoming’s family-oriented tale about dysfunction and disconnection.

And that’s all without mentioning Hideo Kojima and Guillermo Del Toro’s P.T. from back in 2014 (RIP!), which is possibly one of the most iconic demos to have ever been stealth-released. Not only did it feature The Walking Dead alumni Norman Reedus as the main protagonist, but it was also just an incredibly clever piece of sleight of hand word-of-mouth marketing that felt like a legit cultural phenomenon in gaming. No small feat, indeed.

As for the here and now, let’s just hope that Konami finally puts to bed all these constant rumors, and does the right thing by resurrecting the beloved IP in a respectful and meaningful way at some point in the future. *Fingers firmly crossed*

Capcom’s ubiquitous horror franchise is not only the biggest-selling entry on this list, but it’s also likely the most popular thanks to its multi-media proliferation. I mean, not many games can boast a live-action film series, a bunch of animated movies, comic books, and a TV show. Then again, this Japanese horror brand isn’t just any normal video game franchise.

Of course, popular doesn’t always equal best, but Resident Evil’s blend of intense action and chilling survival horror is one of those rare IPs that can proudly stand tall to don both aforementioned blood-drenched crowns.

Series stalwarts may balk at the idea of Resident Evil 4 being the best entry in the entire franchise – it undeniably transformed the core survival horror DNA to a more action-oriented experience, for better or for worse – but most fans, including yours truly, believe that the fourth iteration was indeed the most profoundly impactful.

Elsewhere, 2002’s GameCube remake of the first Resident Evil is absolutely stellar, especially for those looking for a more traditional count-every-bullet survival horror experience. Meanwhile, 2019’s Resident Evil 2 remake is another unforgettable experience; a wonderful reinvigoration of the Japanese publisher’s terrifying formula that retools its grisly blueprint for modern audiences.

The good news is that the Resident Evil franchise continues to go from strength to strength, and undoubtedly has a bright future ahead of itself following the critical and commercial success of this year’s Resident Evil Village.

When life gives you lemons, grab some industrial cutting equipment and slice your troubles into tiny little pieces of blood-soaked potpourri.

Sure, Isaac Clarke’s interstellar survival horror opus may be officially getting a snazzy reboot on next-gen consoles, but we’d still love to see a remaster of the original trilogy.

Taking inspiration from film classics like John Carpenter’s The Thing and Paul W.S. Anderson’s Event Horizon, the Dead Space trilogy is a glorious reanimated Frankenstein-esque monster that undeniably owes many of its debts to the silver screen.

From the nightmarish monster designs of the deadly Necromorphs to the gloomy blood-splattered hallways of the USG Ishimura to the top-tier writing, audio design, and voice work, Dead Space is a veritable tour de force that is a timely reminder of how well horror can flourish in a polished AAA format.

Though the third iteration may not be as beloved as the first couple of games, it’s safe to say that EA’s monstrous planet-hopping sci-fi adventure is arguably the pinnacle of one of the best and most cinematic horror franchises out there. And we cannot wait to see more of what Motive Studios has been cooking up for us with its newly-announced and much-anticipated Dead Space 4 follow-up.

To be honest, I often think that Shinji Mikami‘s action-shocker series gets a bit of a bad rap. Granted, there are only a duo of titles in said franchise, but the majority of critics, including this humble scribe, hold both survival horror experiences in very high regard indeed.

Focusing on a disgruntled police detective with a troubled past called Sebastian Castellanos, the world of The Evil Within (AKA Psychobreak in Japan) is a dark and dreary neo-noir backdrop brimming with knowing nods to western psychological horror flicks like The Cell and The Texas Chainsaw Massacre.

The thing is, The Evil Within probably doesn’t get as much love and attention as it deserves because it’s perhaps the least groundbreaking entry on this list. That said, what it lacks in innovation, it makes up for in pure unadulterated terror. In other words, Tango Gameworks’ glossy action-horror franchise is very much an evolution of the survival horror template rather than a full-on revolution.

Boasting a taut, macabre atmosphere and a bonkers, mind-bending narrative while weaving it thoughtfully together with some really tight moment-to-moment action gunplay, both The Evil Within and its 2017 sequel are oft-overlooked modern classics that will, hopefully, get some sort of follow-up in the future.

The Last Of Us

Speaking of franchises with just a duo of titles in them, Naughty Dog’s The Last Of Us series is absolutely worthy of a mention for bringing nail-biting horror into the mainstream spotlight.

Not only are they amongst the best-looking games ever crafted, but they also boast beautifully exquisite soundtracks courtesy of acclaimed Argentine composer Gustavo Santaolalla, who’s well-known for his award-winning work on provocative cinema-like Brokeback Mountain and Babel.

Essentially, The Last Of Us titles are phenomenal once-in-a-generation experiences that truly deserve your time and attention. The series hits on just about every aspect of horror fans could want. Its post-apocalyptic fungi-based setting is eerily realistic, the storytelling is emotionally resonant and heartbreakingly poignant, and every instance of combat leaves you on the edge of your seat thanks to challenging and terrifying encounters with humans and monsters alike.

Ultimately, both The Last Of Us and Last of Us Part II are utter masterpieces that show us that, as long as developers try and be creative, there’s still plenty of life left in the ol’ zombie formula yet.