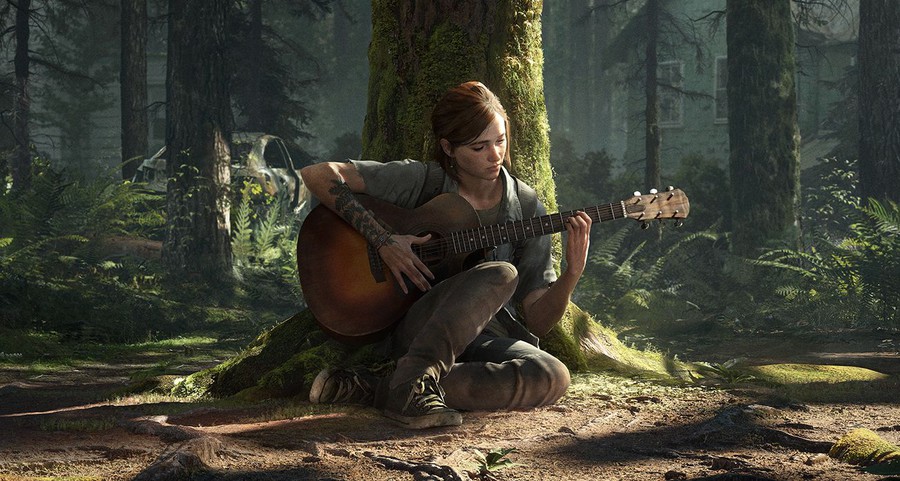 The Last of Us Part II is celebrating its one-year anniversary this week, meaning it’s officially been a year since players have embarked on that grueling journey together with Ellie as she seeks revenge. To celebrate the occasion, we’ve gathered some moments from The Last of Us Part II that have stuck with us even a year after the game’s release.

Do be warned, however, that this article contains major spoilers for the entire story of The Last of Us Part II, so stop reading if you haven’t played the game yet.

The game pretty much opens with the death of an incredibly beloved character, and if you’ve been able to avoid spoilers, this moment is both shocking and traumatizing. The game’s introduction ends with Joel being captured by the ex-Fireflies, and Ellie is forced to watch as Abby beats him to death with a golf club.

When she finally delivers the killing blow, all the sound is drowned out from Ellie’s ears and she’s unable to perceive anything around her. Her whole world is basically shattered, and so is the player’s. Joel’s death is definitely a divisive moment in The Last of Us Part II, but it’s one that’s also impossible to forget.

The Last of Us Part II is full of moments that make you want to stop playing entirely, and the first major fight between Ellie and Abby is definitely one of them.

By this point, you’ve already seen the story from both perspectives. You can understand Ellie’s wrath after losing Joel and her regret for not being able to mend their relationship before he died. Likewise, you can understand Abby’s own pain from losing her father and the guilt she felt over dragging her friends into her revenge plot. There’s no good guy in this scenario, and the fight is just painful to go through.

The game makes it even more unbearable by putting players in control of Abby, essentially forcing you to hunt down Ellie, who’s become one of the most iconic faces in video game history at this point. It’s painful, and things get worse when Abby gets the upper hand is literally about to kill Dina right in front of Ellie.

Even after Abby decides to spare them both, the hurt on Ellie’s face is evident, and you just find yourself wishing you could go back to the days where she was still 14 years old – still young and innocent, and still protected from all this trauma.

Ellie and Dina at the Dance

While The Last of Us Part II certainly is a very grim game, it’s also got a handful of uplifting moments as well. One of the best moments is in that scene we got to see during the E3 2018 presentation. Ellie’s hanging out at a party, she has a little conversation with Jesse, and then she goes off to dance with Dina.

It’s not a stretch to say that Ellie’s had a pretty tough life; she’s lost Riley and Marlene, and her relationship with Joel is in tatters at that point in time. This isn’t even mentioning, you know, the whole Fireflies massacre thing and her feeling guilty over not being able to help engineer a vaccine.

And yet, watching her dance with Dina is heartwarming. Even if it’s just for a minute, it makes both Ellie and the player forget all the horror and violence that frequently happens around our favorite characters. It’s also one of the first times we get to see Ellie be a teenager, and this scene ends up being one of the few bright spots of the game.

The game comes to a close with yet another showdown between Abby and Ellie, but instead of being an epic, bombastic final boss fight like you’d expect from most AAA games, this fight is subdued and even upsetting at times.

At this point in the story, both characters are exhausted. Abby just wants to move on with her life, and Ellie still hasn’t learned her lesson about not going out to seek revenge. Abby wants to protect Lev, and Ellie can’t forgive herself or come to terms with the fact that she just ran out of time with Joel.

They’re both willing to fight to the death even though it’s not something that either of them really want. This time, Ellie gains the upper hand, and she’s also the one who shows mercy. Just as she’s about to kill Abby, she’s reminded of her last memory of Joel and the importance of forgiveness. She realizes that her quest for revenge was a cover for the guilt and remorse of not being able to properly make amends with Joel, and that killing Abby won’t bring her the peace she wants.

The scene ends with a haunting shot of Ellie sitting in the water sobbing, and it’s one that will stick with us for a long time.

Of course, this list wouldn’t be complete without at least some sort of mention about Future Days. It’s the Pearl Jam song that Joel plays for Ellie at the start of the game, and the same one that Ellie attempts to play at the end.

The Last of Us Part II ends with an absolute downer of an ending, with Ellie finally returning home only to find that Dina’s left with the baby. She heads upstairs to find her old guitar and tries to play the very first song that Joel had performed for her, but she can’t quite get the chords right as she’s missing a finger.

It’s a powerful scene that really drives home the point that her quest for revenge has ultimately amounted to nothing. She realized that killing Abby wouldn’t have brought her any peace, and ends up losing her ability to play the guitar properly –the only thing she really had left of Joel. It’s heavy, but also the perfect way to end this tragedy of a story.