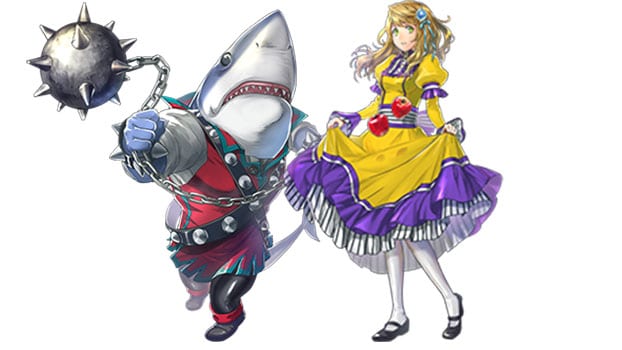 The game’s crowdfunding tally has now reached $2.217.864, with new stretch goals revealed since the previous batch.

The $2.2 million goal brings the 103rd hero named Hildi and has already been achieved.

The $2.35 million goal involves a “Top Battle Minigame” and the $2.45 million goal is titled “The Honest Soldier.” While it has not been fully unveiled yet, it’s likely another character.

Incidentally, Eiyuden Chronicle: Hundred Heroes is now among the top-20 gaming Kickstarter campaigns of all time, and it took only two days.

This success shouldn’t be too surprising considering that it brings back together Suikoden creators Yoshitaka Murayama and Junko Kawano, and appears to be a spiritual successor of the popular franchise.

HOME: A noble family in one of the League’s lesser nations

A young woman descended from a collateral branch of one of the League of Nation’s royal families. She’s sharp as a tack, a go-getter, and full of fire. Where others mince words, Perrielle sharpens them for the kill—and people deride her for that lack of demureness. “She’d be a lovely girl,” they say, “if she wasn’t always braying.”

Perrielle’s father, whom she loved dearly, died when she was little. She came to realize that for all the presents he’d showered her with, he’d never offered her a word of praise. Now, she is driven by this one thing she can never have: her father’s approval.

“Those prune-faced mules on the council can shove it. I work twice as hard as the boys, and get thrice as much done! Well, that’s fine. I’ll put in four or five times the hours, if that’s what it takes to shut their stupid, wrinkled old mouths!”

Perielle seems like a very capable young woman. If only others noticed how hard working and intelligent she is. We can’t wait to see what she can do!

A shi’arc guard captain originally from Impershi’arc, his people’s desert nation. His strategic eye and masterful ability to mount a defense have helped him secure mercenary work in many a town.

Yuferius may look scary, but he’s a capable, detail-oriented commander who makes sure to learn the name of every soldier who serves under him.

How exciting! Yuferius looks like a walking shark attack! He’s definitely going to be an interesting addition to your army.

We also get the announcement that all backers who selected the digital version of the game will get access to the beta.

The developers then clarified the languages the game will be available in.

We also get the confirmation that the PC version of the game will launch on Steam. Other PC platforms may be announced at a later date.

For the sake of full disclosure, the author of this article has backed the game at a basic level in the first minutes of the campaign.