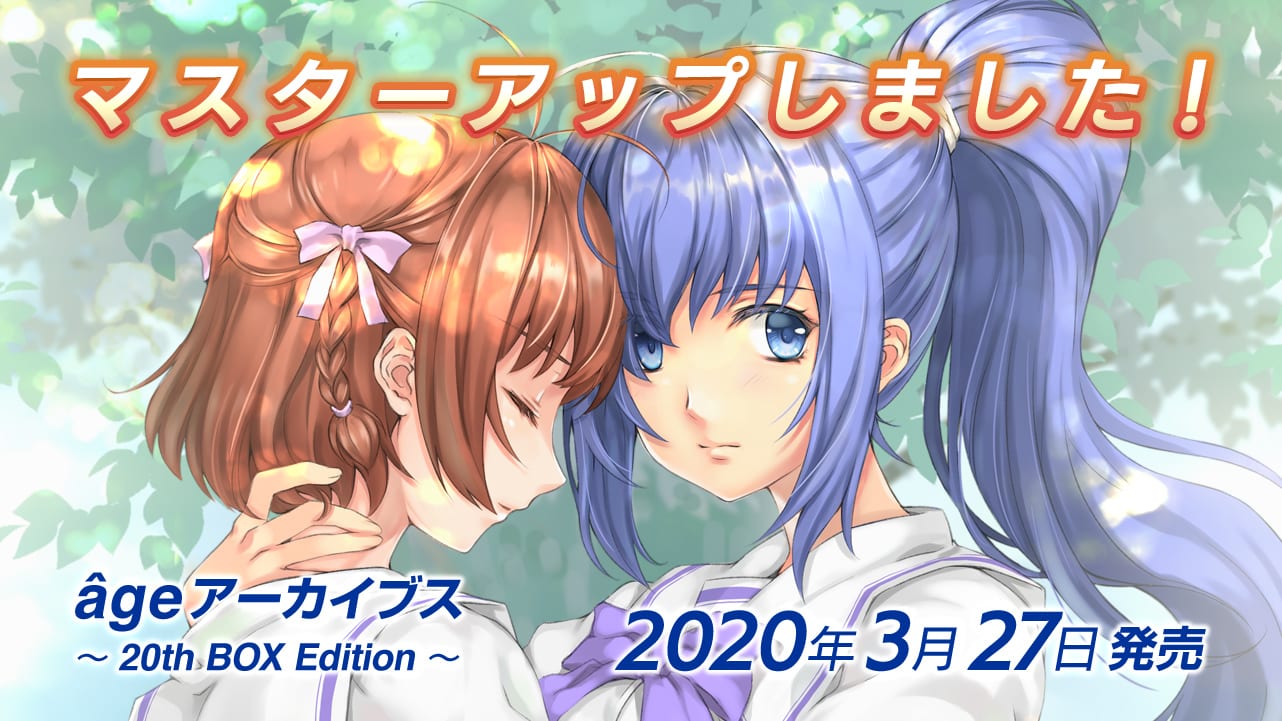 Today, during a livestream from aNCHOR’s headquarters in Tokyo, âge talked about the massive âge Archives 20th Box Edition coming to Japan.

The giant collection announced in December 2020 includes nearly all games created by the developer, including the Muv-Luv series and Kimi ga Nozomu Eien, but also many more obscure ones.

Most of the games included will run natively on Windows 10 for the first time. It comes in a standard edition and three limited ones, Silver, Gold, and Platinum.

First of all, today we learn that the bundle has gone gold (or “master up” as the Japanese say). Basically, work on it has been completed and it’s ready to be printed ahead of its release on March 27, 2020.

To celebrate, we get the illustration of Haruka Suzumiya and Mitsuki Hayase from Kimi ga Nozomu Eien that you can see above.

On top of that, we get to take a look at the prototype of the packaging. Considering that it needs to include a ton of disks, it has an interesting foldable design that can be exploded to access every DVD and CD inside.

We also get to see the “proof of purchase” cards for every edition, and the set of stickers.

Interestingly, creator Kouki Yoshimune showcased that it includes the emblem of the Valkyrie unit when it gets attached to the Imperial Army on top of the emblem used under the United Nations.

The difference is in the “Alternative IV” mention (or lack of thereof) and the Imperial Army version is quite rare according to Yoshimune-san.

You can everything in the gallery below (including more art from âge’s game Shapeshifter) and the full livestream at the bottom of the post.

I also added a couple of pictures of Kasum’s rabbit plushie included in the limited editions, which was showcased last week.

Incidentally, speaking of releases, the English version of the Muv-Luv Alternative Codex has been released digitally today, and it’s available on Steam.

Incidentally, Yoshimune-san recently revealed an updated version of another relevant image board for Muv-Luv Integrate, explained another showcasing a few custom TSF, one showing a dire situation in New York, and another focusing on heroines from past games, and one focusing on Yuuko Kouzuki.