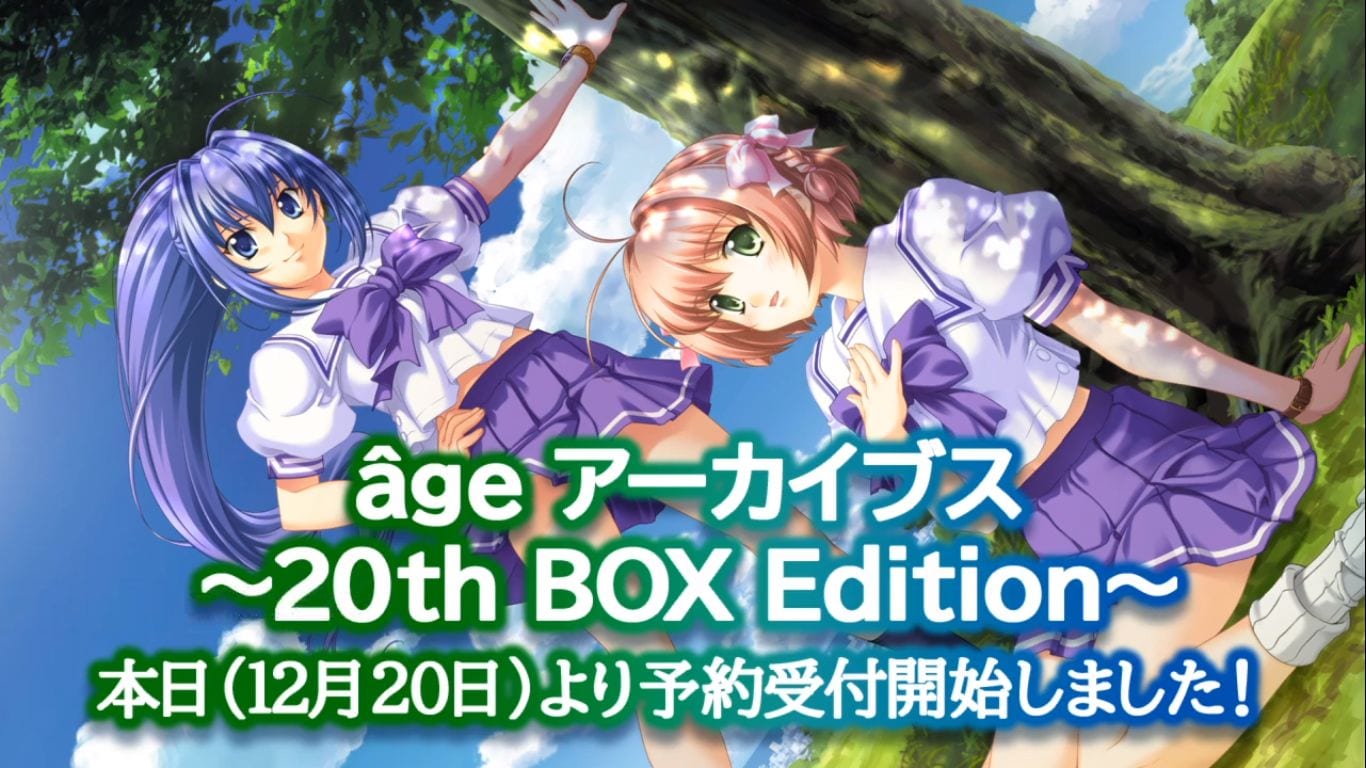 Today Muv-Luv developer âge announced during a livestream the upcoming release of the âge Archives 20th Box Edition in Japan.

The bundle will launch on March 27, 2020, and it’ll include nearly all games launched by the studio over its long and glorious history.

One of the most interesting aspects is that all games will be officially compatible with Windows 10 (which is a first for many of them, even if they usually run without many issues in their original form). They will also get instruction manuals with comments from the developers, and more.

Pre-orders start today at this link and four editions are available.

The standard edition isn’t limited, but it’s far from “standard” in its content.

It’ll include 21 games + 4 bonuses, a set of 20th-anniversary illustrations by popular artists (they were displayed at the recent 20th-anniversary event of which you can read my report with plenty of pictures), all the past fan club newsletters, the booklet with descriptions and instructions for each game, and a sticker set.

The games included are as follows:

Three limited eitions labeled Silver, Gold, and Platinum will come with all of the above plus four more bonus games on top of AyuMayu Alternative, Haruko Maniax, and Kimi ga Nozomu Ma’ai.

In addition to the content listed above, the Silver edition will include a leather business card case, a special artbook, Kasum’s rabbit plushie (1.4 meters tall), and a towel.

The Gold edition will throw a sightseeing tour guided by the series’ creator Kouki Yoshimune himself into the package, while the Platinum Edition will let the buyer be portrayed as an NPC in the recently-announced Muv-Luv Integrate, while their name will be displayed in the credits.

While the Silver edition will be sold on a first-come-first-serve basis, the privilege to purchase the Gold and Platinum editions will be determined by lottery.

Below you can check out the portrayals of the editions, on top of the beautiful illustrations used for the retailer-specific bonuses which will be tapestries, an acrylic smartphone stand, and a microfiber cloth depending on the store where you purchase the bundle.

You can also read my report of the 20th-anniversary event recently hosted in Tokyo, and my analysis of the art showcased for Muv-Luv Integrate.