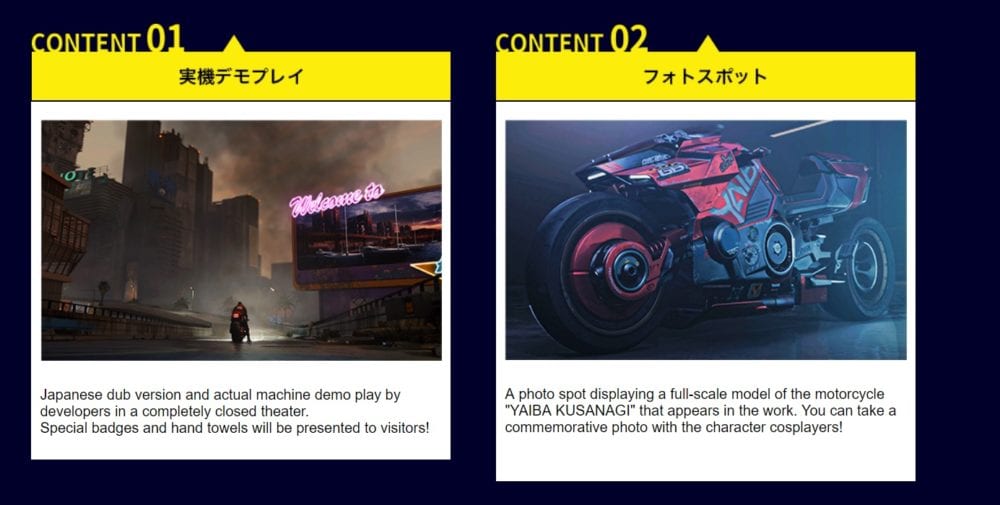 Cyberpunk 2077 is headed to Tokyo Games Show next month. Spike Chunsoft, the company publishing the game in Japan, revealed plans today via its new dedicated website which highlights exactly what will be shown and what will feature at the booth.

“A Japanese dubbed version and actual machine demo play by the developer will be screened in a completely closed special theater.
A full-scale model of a motorcycle that appears in the game and a character cosplayer will also appear!”

We learn that ” Special badges and hand towels will be presented to visitors” of the booth,” which will be located in the Makuhari Messe Hall 8.

Twinfinite will be attending the show, so we’ll give you the low down from the show floor if you’re not going. But if you are, you might be pleased to know that there’s an ambassador program that could give you and some pals the chance of priority viewing at the Cyberpunk 2077 booth.

The campaign is explained:

“Become a TGS ambassador of “Cyberpunk 2077” and make the event exciting! Invited 5 people by lottery from those who applied for the Twitter campaign.

Special experiences such as viewing priority presentations at the theater, special commemorative photography, questions to developers, and gifts of luxurious original goods are presented.

Post photos on social media on the day, or compile a report on your blog later, and make the event as an ambassador! “

This week wraps up CD Projekt Red’s presence at Gamescom 2019, where the developer released a slew of new information and screenshots of the game.

The week kicked off with the announcement that the game will be playable on Google Stadia before several batches of screenshots were released almost daily — check them out here and here.