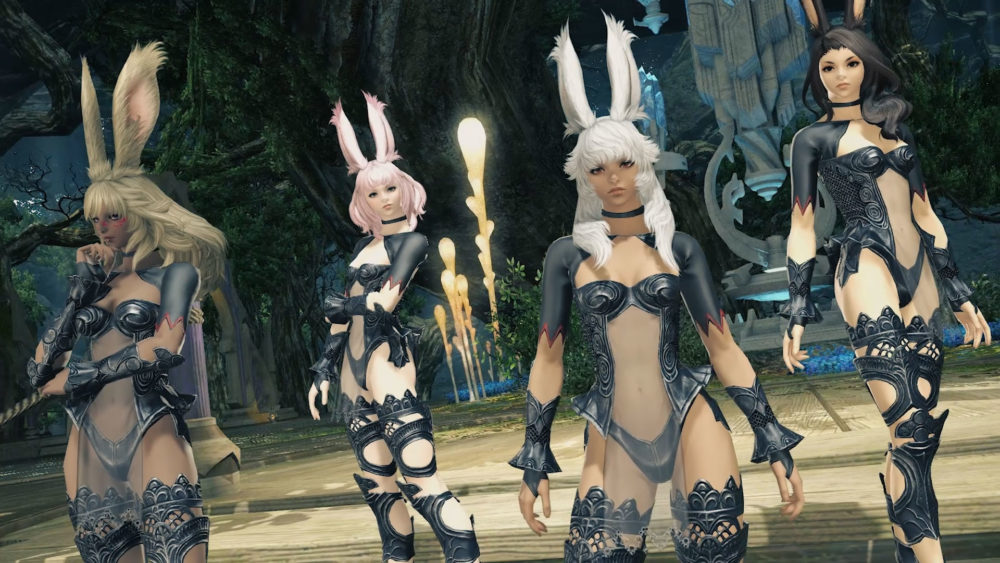 As you may already know, the two races are Viera and Hrothgar, which will be respectively female and male-only. While the Viera come straight from Final Fantasy XII, the Hrothgar are explicitly inspired by Final Fantasy X’s Rhonso.

Interestingly, we get detailed information on the background and clans for both races. We start with the Viera.

“Of tall stature and slender frame, the Viera’s physical appearance is strikingly similar to that of the Hyur and Elezen, save for their distinctive long ears. Adhering to a strict code known as the Green Word, they are prohibited from contact with the outside world under threat of exile. Their society is purely matriarchal, and males of age are seldom, if ever, found within the bounds of any village. They instead serve as protectors of the wood from the shadows, that no evil may ever encroach on their sacred lands.”

In the image below you can read the official description of their two clans, Rava and Veena.

We then move on to the Hrothgar.

“Hailing from the distant shores of Ilsabard, the Hrothgar are a burly people of lionlike appearance—or the males are, at least. Females number staggeringly few among their population, and thus are rarely so much as glimpsed by the other races.

The Hrothgar’s imposing countenance─mitigated not at all by their sharp claws and still sharper fangs—incited panic amongst Eorzeans upon their arrival. As they were also unable to communicate, initial interactions with the commonfolk often escalated into conflict. It was not until the Hrothgar gained mastery of the common tongue that fears were allayed, and in time they would be as neighbors, welcome in all corners of the realm.”

Their clans are Helions and The Lost.

At the bottom of the post, you can find two character images for the Veena and the Lost.

Though they boast a command of magic unrivaled in Norvrandt, pixies generally limit their sphere of activity to Il Mheg, dancing amongst the winds on colorful wings. Do not be fooled, however─they are often as cruel as they are carefree.

Though somewhat canine in appearance, the Nu Mou are indeed members of the fae, and make their homes in Il Mheg. They are more fairly disposed toward man than their pixie cousins, however, and maintained close ties with the people of Voeburt in its day.

This insular tribe dwells upon Mt. Gulg in Kholusia, its diminutive people rarely leaving the community of their birth. Dwarves are known for their skill at mining, metallurgy, and crafting mechanical marvels, but they themselves consider the true marks of dwarfhood to be respect for tradition and adherence to strict ancestral laws.

We also learn more about the new trials:

A being of great power, Titania holds sway over the pixies and other fae folk of Il Mheg─folk who, despite their notoriously temperamental natures, bow before their ruler one and all.

Innocence sits at the top of the heirarchy of sin eaters─the beings that emerged from the Flood to plague what remains of mankind. Beyond that, its nature and purpose remain shrouded in mystery.

The new cities and areas get an official description as well:

A bustling city that developed around the Crystal Tower in the years following its sudden appearance in Lakeland. It serves as a safe haven for people of all races and creeds as they join hands in the struggle against the merciless sin eaters.

With its influence extending across the majority of the isle of Kholusia, this powerful military nation once stood firm against the onslaught of the sin eaters. Recent years have seen a drastic shift in Eulmore’s position, with the wealthy upper classes turning their backs on the plight of the world, indulging in an endless parade of decadence and debauchery.

Once, long before its towering trees were seeds, in this millennia-old forest stood the royal capital of an advanced magical civilization─the Ronkan Empire. The stony remnants of its lost grandeur can still be spied beneath the shadowy boughs.

It was on the edges of this vast desert, occupying the southern expanse of Norvrandt, that the Flood of Light was halted. Inhospitable from the beginning, it now lies on the threshold of life and all-consuming radiance.

Tucked away in the mountains, this enchanted land was once home to the Kingdom of Voeburt. When men abandoned it following the Flood of Light, it instead became home to the fae folk, the playful and childlike pixies chief among them.

The largest island in Norvrandt, the greater part of Kholusia lies under the dominion of Eulmore, the city of final pleasures. Compared to other lands, it is known for experiencing few sin eater attacks, a reputation which draws throngs of refugees to its shores.

A verdant region centered around the Source, the great lake whence it derives its name. Rich in aether, this land has long been held sacred by the elves, its original inhabitants. Nowadays, it falls under the aegis of the Crystarium, mankind’s final bastion in the war against sin eaters.

If you want to know more about Final Fantasy XIV and its upcoming expansion Shadowbringers, you can check out the latest reveals from Tokyo FanFest including the Dancer job and the Hrothgar race,  an official batch of screenshots, and a look on how the new city of Crystarium has been created.

If you’d like to get ready before the expansion’s release, Final Fantasy XIV: Stormblood is currently available for PS4 and PC, and a few more updates are coming. A free login campaign is currently in effect.