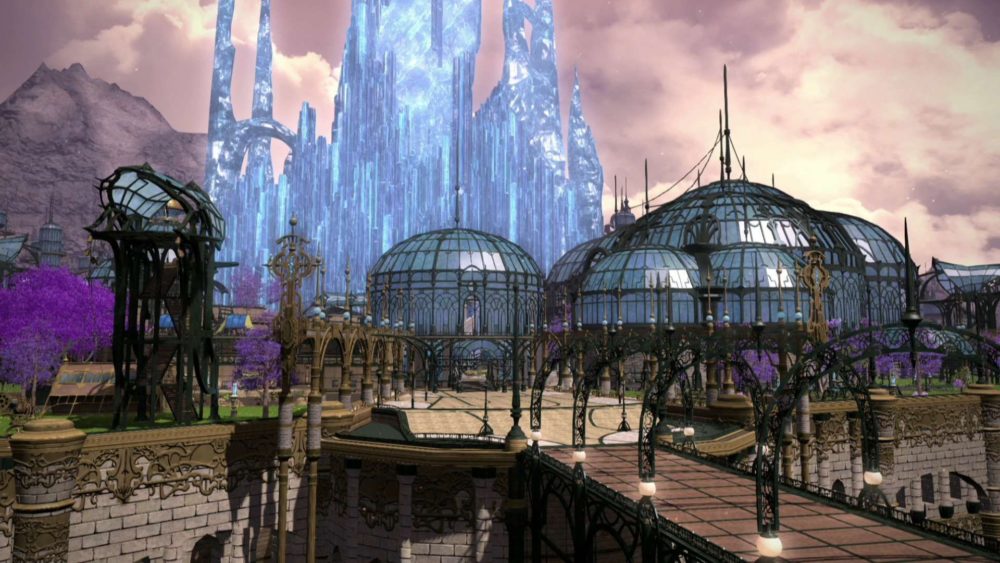 Today, during the Development Panel broadcast from Final Fantasy XIV FanFest in Tokyo, Square Enix shared more information on the development of the new expansion Shadowbringers.

We get to see some really interesting work-in-progress images of the new city named Crystarium that was introduced yesterday, shared by background artists Yoshiki Takanashi and Masato Shida. You can see all the images below in order from the concept art phase to the end of production.

Do keep in mind that the images below do not represent the final look of the city in the expansion, but they were shown only to illustrate the development process.

Below you can check out a few final screenshots showing how Crystarium will actually look in the expansion.

An extremely interesting detail we heard is that the look of the city was inspired by the tech demo showcased at E3 2005 titled “Rapture.” That demo was created to give an idea of what technology could achieve and artists were given leeway to do pretty much whatever they wanted with it.

It’s so advanced that it would have trouble running on PC nowadays and it would have never run on a PS3 at that time. A funny detail that was shared is that the lamps in the demo have modeled lightbulbs inside. Into the lightbulbs, the filaments were also modeled in 3D, and they light up to illuminate the scene.

In case you missed it, you can watch it below. Incidentally, this is the first time that we see it in high resolution.

We also got to take a look at the creation of a new area for the expansion. Interestingly, the sand was photo sourced from pictures taken during a business trip in Saudi Arabia.

Again, all the images are work-in-progress.

Below we can see work done on lighting. Interestingly, the clouds were inspired by pictures taken in Guam.

Last, but not least, we see some more screenshots of the areas that will appear in teh Shadowbringers expansion.

If you want to get ready before the expansion’s release, Final Fantasy XIV: Stormblood is currently available for PS4 and PC, and a few more updates are coming, including a Final Fantasy XV crossover, and more story content. Earlier today we heard a full schedule of the upcoming patches.

Today we also learned that the game is getting a movie in June, which is a remake of the TV Series “Dad of Light” from 2017.