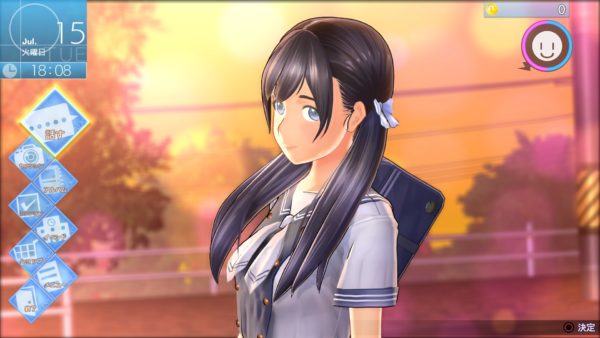 The trailer introduces one of the heroines who can be romanced in the game, Riria Takamura.

Our hero decides to go full stalker and takes a picture of her without permission. She asks him if he’s part of the newspaper or photography clubs, but he denies.

At this point, she feigns being angry and mentions that he’s a scary person wandering the school on a Sunday and taking pictures without permission. She then continues by telling him that he needs to be punished severely.

As the hero begs her not to tell the teachers, she jokingly treats him as a naughty boy and mentions that the next time he needs to properly ask for permission.

Yes, this kind of things happens only in video games (and anime).

You can check out the trailer below. If you would like to see more about the game, you can also enjoy a recent trailer featuring Nanatsu, a gameplay video released a little while ago, more gameplay footage, a previous clip, and some more introducing each heroine. We also have a batch of screenshots featuring two new characters from earlier today.

LoveR was originally announced with a Japanese release date of Feb. 14 to coincide with Valentine’s day but local gamers will have to wait until March 14. It will launch exclusively for PS4. At the moment of this writing, a western release has not been announced.