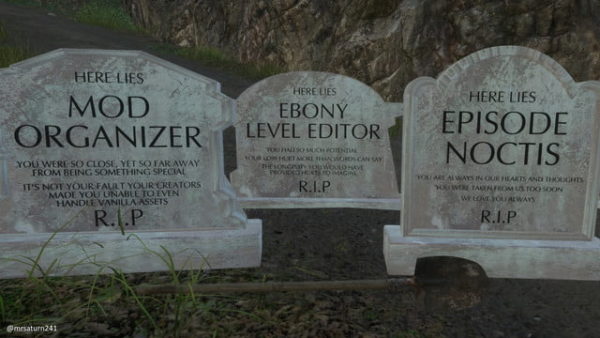 It hasn’t been the best few weeks for fans of Final Fantasy XV, but at least one modder has managed to lighten the mood around some recently cancelled DLC and quality of life features.

Developed by Mrsaturn241, the FFXV Dlc Memorial mod adds tomb stones to commemorate the “deaths” of the Epsiode Noctis, Episode Luna and Episode Aranea DLC projects, as well as the death of the Ebony Level Editor and Consumer Trust.

The mod was developed in response to the recent announcement during the game’s anniversary stream that development has ceased on three of four planned story DLC episodes, with Episode Ardyn being the only episode that will still be released. Continued support for the Windows port of the game has also been cancelled, and the game’s director Hajime Tabata resigned from his post at Square Enix and Luminous Productions.

“I could handle the loss of the episodes fairly well, but after hearing that Windows Edition production has concluded, it was like another more painful slap in the face,” Mrsaturn241 wrote in the mod’s description. “FFXV will always have a special place in my heart~ but it is truly regrettable that we are left with a weak Mod Organizer and no level editor.”

The mod can currently be downloaded from Steam.

Originally released Nov. 29, 2016 0n PlayStation 4 and Xbox One, Final Fantasy XV saw heavy post-release support from Square Enix in the years since its release. Not only was DLC planned for release up to two years out from its launch, but several additions ranging from the multiplayer mode Comrades to crossover events with other franchises like Assassin’s Creed were developed to expand on how fans could play the game.

The final piece of DLC for the game, episode Ardyn, is expected to release in March of 2019.

Final Fantasy XV is currently available on PlayStation 4, PC and Xbox One. For more on the game, check out our thoughts on what the cancellation of the DLC and Tabata’s departure means for the game’s future. Also, read our thoughts on how the loss of the Luna Nox Fleuret DLC episode unceremoniously ruined the character’s chance to be fully realized.