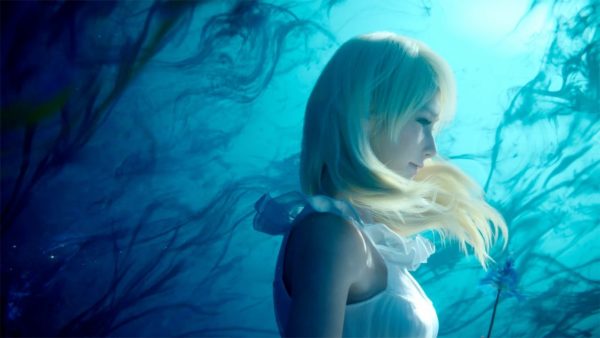 Final Fantasy XV has, in more ways than one, always felt like an unfinished project. From its many past updates to its now-canceled DLC plans, it was pretty clear that the developers had plenty of ideas that just couldn’t make it into the final product before launch. The same rings true for Final Fantasy XV’s other half-baked heroes – including the game’s leading lady, Luna Nox Fleuret. While her character could have finally been salvaged from the depths of development hell, Final Fantasy XV just killed her off (again) by canceling her upcoming episode.

Luna has always had it rough during development, probably more than most of the Final Fantasy XV cast. She originally started as a completely different character named Stella, who would have stood out from the other leading ladies in the series. She was eventually scrapped because she had a completely “different role” than Luna. Not like we actually knew what Stella was gonna do in the first place, but okay.

Back then, Tabata promised that Luna would be presented as a very “strong-willed character” who talks to people about her hopes and dreams. Overall, she would be playing a really big part in the story.

And it’s true, Luna actually did play a big role in Final Fantasy XV. She always guided Noctis when they were kids, helped Noctis by communicating with the Astrals, and strived to support Noctis fulfill the prophecy as the King of Light. Noctis, Noctis, Noctis.

But wait, who is Luna? Behind her responsibility as an Oracle and her royal duty to babysit the prince of Lucis behind the scenes, who is this woman?

The Final Fantasy series has always been home to some of the boldest, nuanced female heroines in gaming. Characters like Aerith and Yuna have left such a huge impact because of their unwavering sense of duty, which we could say also the same for with Luna. However, there’s one thing that sets them apart from Luna: they actually had a personality.

Part of this was mainly because they were party members, and we got to experience who they were first-hand. Aerith valued the planet above her own life, although that didn’t stop her from expressing herself as a person. She was sweet and kind, yet also sassy and flirty. Aerith constantly teased Cloud and even threatened to rip a man’s genitals off. These little scenes add up, leading to the point where we actually cared when she died because she felt real, and most importantly, human.

Luna, on the other hand, felt little more than a plot device to push the story forward and ensure that Noctis would fulfill his destiny. She kept things running, albeit behind closed doors where we couldn’t see her. We never really got the chance to know her as a person, and when we almost did in Altissia, Ardyn went ahead and killed her. This led to a would-be tearful parting scene, except for the fact that Luna had to go on about Noctis being “the chosen one.” Luna then lived on through cutscenes, in which she just goes on about her (literal) undying responsibility to her king.

Playing through Final Fantasy XV, I remember watching Luna’s “tragic” death scene unflinching and even feeling a bit frustrated. I wanted to care about her, especially since she played such a big role in Noctis’s life. But when you feel much more affected over a destroyed car than the leading lady’s demise, it speaks volumes on just how little of an emotional impact Luna left behind.

You can also add to the fact that Noctis and Luna hardly had any chemistry whatsoever because they never really talked to each other in Final Fantasy XV. The most they’ve really done was exchange letters through a magical dog and bond over some book when they were children. We never see them alone together or even just have a short, heartfelt conversation face-to-face.

Heck, Noctis has more chemistry with a girl outside of Final Fantasy XV because they actually spent a whopping 10-or-so minutes together in some cutscenes. On top of that, even the deleted scene between Noctis and Stella held so much more potential because they actually took three simple minutes to talk about something only they had in common while even exchanging a few quips.

This isn’t even in the game.

Screen time always plays a huge part in developing a character, and Luna just didn’t have that luxury in Final Fantasy XV. Episode Luna could have been the real turning point for her character as we would have supposedly got the chance to play and experience her as a person instead of a walking, talking plot device. Imagine learning more about her interests, possibly even talking to Gentiana about how she really feels about Noctis and why she goes through such great lengths to help him. Not for the fact that she’s an Oracle, but because she actually loves him. Because, y’know, she’s his fiancee and not some trophy wife.

Having her own character episode in Final Fantasy XV also meant we could have seen her actual play style and what she does with that trident. Up until now, it’s been nothing but a decoration she carries around. Does she use magic? Is she a physical damage dealer? We have no hint as to how her play style works, which could also largely attribute to her overall character.

Out of all of the many personalities in Final Fantasy XV, Luna really felt like the character who needed an episode the most. While Ardyn also needed his own episode, most of his lore could actually be found in-game. As for Luna, it’s more of a “what you see is what you get” sort of deal, and there honestly isn’t much to see. Even Final Fantasy XV director Hajime Tabata admitted that she needed more time in the spotlight, stating that he had that “desire to depict Luna as an even stronger female personality.” It’s actually pretty funny how Ardyn managed to one-up her again by getting his Final Fantasy XV episode developed first.

Unfortunately, some plans just don’t push through after a company suffers a loss of $30 million. It’s a shame that Luna had to take the hit, seeing as how she could have been so much more. Who knows if we’ll even see her in crossover spin-offs, and even then, she’d probably be just another stepping stone for Noctis. Whatever the case, Luna’s character arc seems destined to share the same fate as Final Fantasy XV itself: poorly handled, and regretfully discarded.