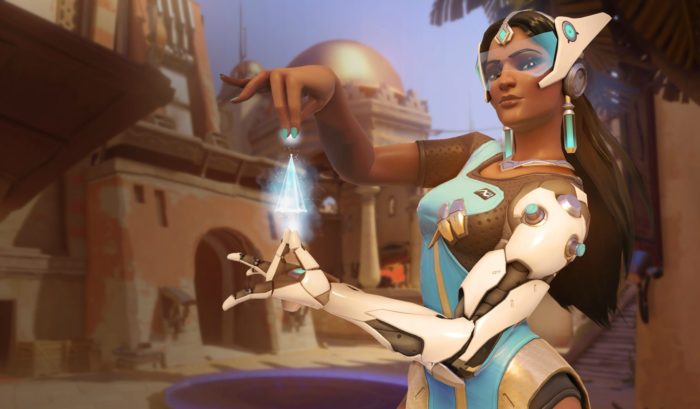 With Overwatch’s new Winter Wonderland event upon us with loads of new skins, sprays, and voice lines, it can be easy to overlook the other big addition that came with today’s update: a new and improved Symmetra!

Blizzard announced a few months ago that Symmetra would be receiving a big overhaul following player feedback and statistics highlighting her limited usefulness. Those changes were originally detailed last month and taken to the PTR for rigorous testing.

Today, Blizzard snuck updated Symmetra into the holiday update and onto official servers on all three platforms. Her biggest changes come in the form of a new Photon Projector, which sends a large projected shield forward (similar to Reinhardt’s shield, but it disappears after hitting a surface).

Symmetra is also the first hero to have an additional ultimate ability to go along with her traditional teleporter. She can now also build the Shield Generator, which gives 75 shields to all allies within its radius. It can be destroyed by enemies once it’s been found, similar to the teleporter. Her turrets have also received a bit of a bump–you can now stock up to six at a time and the cooldown has been reduced from 12 to 10 seconds.