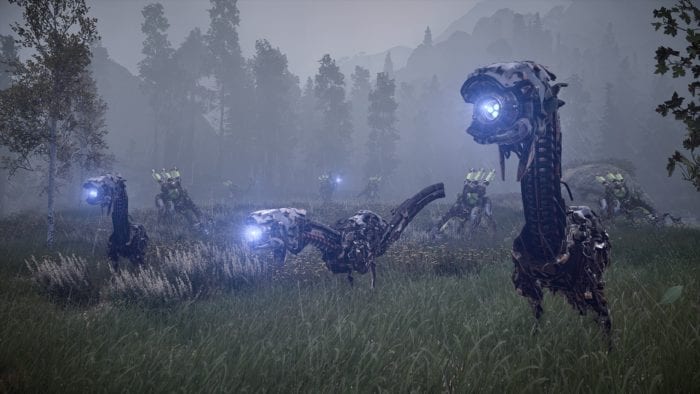 From the moment we saw Aloy take down a massive, robotic T-Rex in the first Horizon Zero Dawn demo, players have been in love with the game’s robot dinosaurs. With the title’s release only a mere four months away now, Guerrilla Games has opened up about the process the team went through to create the already recognizable creatures.

Apparently, a natural, beautiful world controlled by machines was at the very heart of the team’s ideas for the game, from the very beginning. “The machines turned out be very animal inspired. That is something the game designers found to be a very natural way for us to portray these machines,” Managing Director Herman Hulst explains in the video below.

“We knew we wanted them very big, and very awesome, and we wanted a lot of them,” Art Director Jan-Bart Van Beek adds. “But we didn’t know what the exact look of it was going to be. We played with more insect like creatures, or more traditional looking robots, but this whole aspect of nature, and the majesty of nature, combined with these much more prehistoric looking creatures, created a very unique setting and a very unique look.”

From there, the team started to think about what each creature’s role in the world would be, whether as an interesting part of the setting or as a gameplay opportunity for the player. The shellwalker, for instance, is a crab-like creature that is essentially a walking loot chest. Meanwhile the player can climb to the top of the tallnecks in order to reveal portions of the map.

More than that however, Guerrilla also wanted Horizon to feel like a living environment, so every area needed its own, adapted robots, including in the water. That’s where the newly revealed snapmaw comes in. Based on a crocodile, the snapmaw is huge, often works in groups, and is perfectly able to outswim Aloy if it catches her in the water.

Look for even more from Horizon Zero Dawn in the months to come. Earlier today, we got a whole batch of beautiful new screenshots for the game. Horizon releases Feb. 28, exclusively on PS4.