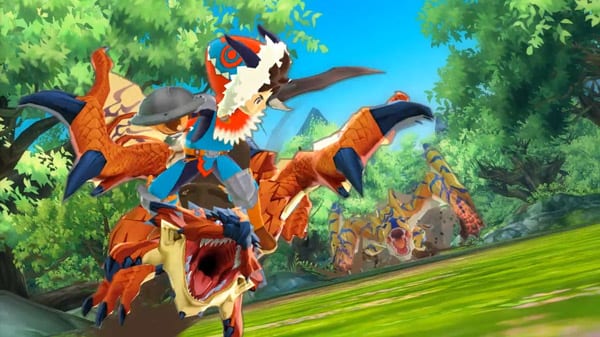 The Monster Hunter series has really been firing on all cylinders recently. It’s one of the hottest things since sliced bread in Japan, and here in the US the series saw more success than it ever had with Monster Hunter 4 Ultimate.

The series definitely has a bright future, and one of the games in that future is Monster Hunter Stories on 3DS. Taking Monster Hunter in an entirely new direction, Stories eschews the traditional series gameplay for a more traditional RPG experience. It has a decidedly cartoony art style that’s just adorable, and seems to have more of a focus on story whereas the main series is all about hunting monsters and taking quests.

Stories was announced last year at Tokyo Game Show, and has an emphasis on riding monsters instead of slaying them, allowing you to roam the overworld while mounted on various beasts. The new trailer gives us a look at some of that exploration, while introducing us to a few of the characters.

Monster Hunter Stories is set for release on the 3DS sometime in 2016 in Japan. Unfortunately no release date has been announced for the west as of yet, but with Monster Hunter’s growing popularity in the US we can only hope to get an announcement soon. Stories looks like it could finally be that easily accessible game into the world of Monster Hunter.

What do you think about Monster Hunter Stories? Do you hope the game gets localized in the United States? How much of the Monster Hunter series have you played? Let us know in the comments below.