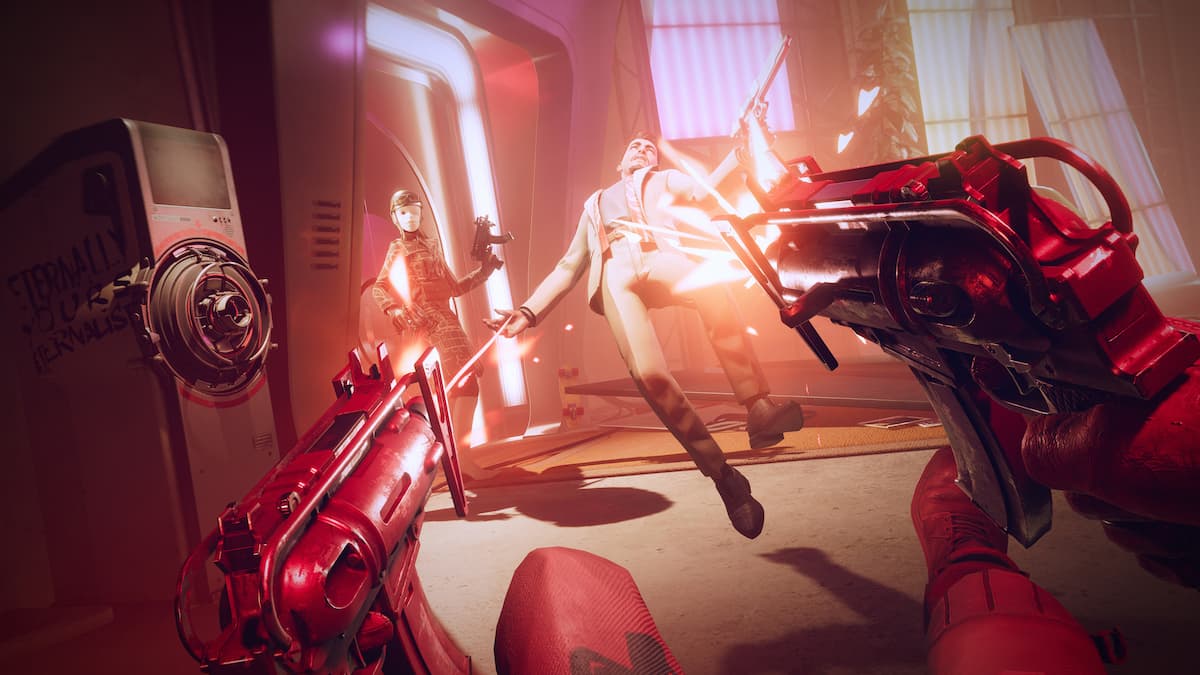 Even though the PS5 has only been out in the wild for around 2 years, it still has plenty of great options when it comes to its first-person shooter (FPS) offerings. If you’re on the lookout for some recommendations, well, you’re in luck. Just a heads up, though: we’ve chosen titles that are either a) natively playable on PS5, or b) have, or are planned to receive, a PS5 upgrade. With that out of the way, here are 15 of the best FPS games you can play on your PS5 right now. Let’s jump into it, shall we?

Respawn Entertainment’s free-to-play sci-fi battle royale continues to go from strength to strength. Not only was it one of the most played games of 2021, but it has also received a multitude of new playable characters, maps and modes thanks to ongoing post-launch updates from the US-based studio.

Officially an off-shoot IP set in the universe of Titanfall, Apex Legends is as fun to play as it is super popular. In a nutshell, if you’re looking for an entertaining team-based game with fantastic pick-up-and-play gameplay, Apex Legends could be just what the doctor ordered. Fight on, Legends!

If you ever had a soft spot for mowing down tidal waves of zombies in Left 4 Dead back in the day, then Turtle Rock Studios’ latest post-apocalyptic FPS may be the perfect shoot-’em-up experience for you.

Yes, Back 4 Blood is essentially a spiritual successor to that aforementioned series, and boasts all the signature staples that fans have grown to love over the years. Featuring PvE, PvP, single-player, and online multiplayer components, there are a lot of different options at your disposal as to how you want to approach the game. However you slice it though, Back 4 Blood is an absolute blast, especially if you have some friends in tow.

Gearbox Studios’ infamous looter-shooter threequel may’ve been just more of the same from the Texas-based developer’s established formula, but that’s not such a bad thing when the core gameplay loop at the heart of the action is this darn addictive, right?

After all, not only is Borderlands 3 one of 2K Games’ fastest selling games ever, but it’s also one of the series’ biggest in terms of scope. You see, unlike its predecessors, which saw you eke out your survival on the sole planet of Pandora, the latest Borderlands outing offers planet-hopping adventures across a handful of different worlds. Put simply: this is the perfect title for all you seasoned Vault Hunters out there!

As is the case every year, Activision brought us a slick military shooter last year in the form of Call of Duty Vanguard. Setting its crosshairs on WWII, the eighteenth mainline installment in one of the best-selling franchises of all time offers a terrific online multiplayer suite, a solid single-player campaign, as well as a pretty decent Zombies mode, too.

What’s new, though? Well, the newly introduced Combat Pacing feature gives players some freedom over the number of players in their lobbies. Meanwhile, new destructible environments have been introduced for the first time as well. Plus, it’s also cross-platform, which is always a big bonus.

Not to be confused with its 2009 predecessor, Call of Duty: Modern Warfare II is a direct sequel to 2019’s series reboot. Developed by Infinity Ward, the 19th iteration of Activision’s long-running military first-person shooter franchise boasts a new version of Infinity Ward’s in-house game engine and even features cross-play between different platforms, too.

All the signature hallmarks of the hugely popular series are largely here in full force: a fully fleshed out multiplayer suite, a single-player campaign, deeply customizable weapons and loadouts, and even some co-op missions as well. Sadly, the fan favorite zombies mode has been nixed in favor of those aforementioned co-op challenges, but don’t be too perturbed. This is still a helluva FPS package with lots of meaningful content to while away the hours.

Yes, we know this is the third time we’ve mentioned Activision’s chart-topping series on this list, but thanks to how different all these FPS offerings are, we think that it’s justified. Indeed, Call of Duty: Warzone 2.0 is the series’ third foray into the battle royale genre (Blackout from COD: Black Ops 4 was officially the first and 2020’s Warzone was the second), and saying that it’s had a successful launch would be a massive understatement.

While its initial launch was a little rough around the edges (and that’s probably putting it lightly), the latest Al Mazrah map has gone on to become a slick and polished battle royale that is continuing to prove hugely popular. Plus, much like its predecessor, did we mention that it’s completely free-to-play? Result!

Heigh-ho, heigh-ho, it’s off to space we go… okay, you know the song, and we’re sorry we made that joke, but if you’ve ever wanted to play the role of an interstellar mining dwarf, oh boy, have we got the perfect title for you.

Indeed, Deep Rock Galactic is a 4-player co-op mine-’em-up that tasks a gang of dwarves with digging up valuable ores, eliminating extraterrestrial critters with high caliber weaponry, and exploring procedurally generated cave systems across a multitude of different planets. You get to choose from four distinct classes each with their own unique abilities, before setting off on your pint-sized sci-fi adventures. Long story short: this is less Sleepy and Dopey, and more Shooty and Lootey.

Arkane Studios’ timed console exclusive, Deathloop, is possibly one of the most innovative titles on this list thanks to its novel time loop mechanic that tasks players with taking out eight targets in a single playthrough. If you fail, you’ll have to start your mission all over again. Talk about déjà vu, right?

Thankfully, you do begin to learn enemies’ patterns and routines as you carefully manoeuver your way around the world of Deathloop, which helps make your challenge slightly less painless. While it’s mostly a single-player experience, there is a multiplayer component that allows you to invade other players’ games. Highly recommended!

Bungie’s uber-popular looter-shooter received a sequel in 2017, went free-to-play in 2019, and nabbed a next-gen upgrade at the tail-end of 2020. Suffice to say, its reputation in the FPS space is — much like the best gear at the heart of the game: Legendary.

Offering some incredibly challenging dungeons, dubbed Raids, that pit you and a team of up to five allies against some of the game’s most dastardly bosses, puzzles and platforming segments; as well as a fully fleshed-out multiplayer PvP suite, plenty of DLC expansions and a solo mode, Destiny 2 is brimming with content and is a great option for those who love the grind.

Ever feel like letting off some steam by pulling the limbs off a bunch of devilish beasties? Well, Doom Eternal‘s demon-slaying action should fit the bill nicely. Developed by FPS veterans id Software, the OG studio who worked on the original Doom back in 1993, Doom Eternal is the critically acclaimed follow-up to 2016’s titular franchise reboot.

Ubisoft’s action-packed FPS, Far Cry 6, is an open-world playground brimming with corrupt regimes to take down, beautiful environments to explore, and satisfying combat to get your teeth into. Complementing all the action, though, is a really intriguing story that centers upon a father (played expertly by Giancarlo Esposito) and his son.

While it did launch with a few technical hiccups, Ubisoft has thankfully fixed many of these issues through patches, meaning that if you’re jumping in now, you’ll luckily get a largely bug-free and polished experience.

Few games attempt to fuse sci-fi horror with its core shooting, but Metro: Exodus isn’t your typical FPS fare. Indeed, 4A Games’ post-apocalyptic adventure whisks players off to a dilapidated Russian wasteland teeming with mutated monstrosities and hostile remnants of humanity who’ve, well, lost all of their humanity.

Atmospheric, immersive, and visually impressive, Metro: Exodus is an FPS survival horror experience that’ll stay with you long after the credits have rolled. Captivating stuff!

If you’re on the hunt for a more methodical tactical shooter, with an emphasis on team coordination and strategy, then Tom Clancy’s Rainbow Six Siege may be the FPS for you. While it released to complaints leveled at it for a lack of meaningful content, Ubisoft has managed to fix these launch issues thanks to a multitude of updates. In fact, the game has received a myriad of new maps, modes, and playable operators since its launch back in 2015.

Make no mistake, though: this is still primarily an online-centric shooter, so if you’re jumping into this expecting a fully fleshed out single-player mode, we’d recommend you look elsewhere for your shoot-’em-up fix.

1047 Games’ free-to-play FPS sensation took the gaming world by storm resulting in one helluva 2021 for the US-based studio. It’s especially impressive considering they’re such a small-scale indie team with just a headcount of around 25.

Blending familiar, tried-and-true modes – like Team Deathmatch, Domination, and Capture The Flag – with a handful of more creative, unconventional offerings – like Takedown, Showdown, and Instagib – Splitgate is a breath of fresh air in the crowded multiplayer shooter market. In short: this is seriously addictive stuff!

If you cross the frantic looter-shooter action and toilet humor of the Borderlands series and squeezed it into a Dungeons & Dragons-inspired skin, you’d get Tiny Tina’s Wonderlands. That’s more or less the premise here; you’ll play through a board game with Tiny Tina offering some hilarious commentary along the way. The characters you’ll meet on your adventure are voiced by a star-studded cast that really helps elevate the writing. The fantasy setting is a breath of fresh air for the series, while giving fans even more of that super satisfying shooter action we’ve come to expect from the franchise.

Oh, and did we forget to mention the bazillion different weapon variations that you can get along the way, or the incredibly compelling endgame content in the form of Chaos Chambers and Myth Ranks? Tiny Tina’s Wonderlands is a fresher, more satisfying spin on the Borderlands series with plenty to keep you grinding out that Legendary loot for countless hours.

So, there you have it. We hope this helped clue you in on the 15 best FPS games you can play on your PS5 right now. Do you agree with our picks? And were there any titles that we missed? Rappel down to the usual place below to let us know.