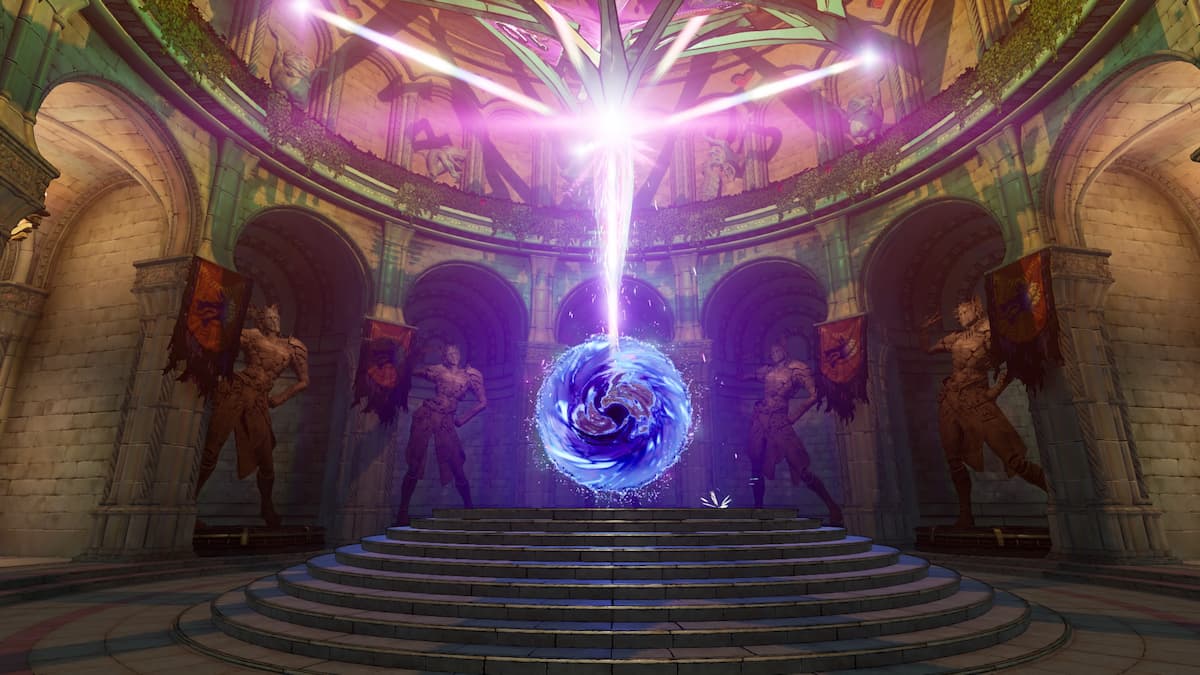 As with many Borderlands games, after you beat the story to Tiny Tina’s Wonderlands, there is a new mode that allows for grinding without having to beat the game all over again. That’s right, we’re here to explain the Chaos Chamber game mode and tell you how to unlock it and get the best rewards.

Some spoilers ahead, turn back now if you haven’t beaten the story and don’t want it spoiled.

What Is Chaos Chamber?

Chaos Chamber is a rougelike mode in Tiny Tina’s Wonderlands. By roguelike it means you take your current gear with you into a set of randomized fights that rise in difficulty as you progress. The fights themselves are just like the countless random and camp encounters you have gotten into in the Overworld.

The only big difference is that the Chaos Chamber enemies drop crystals that can be used to purchase modifiers mid-run or rewards at the end. These can be a tough challenge as enemies can easily out level you. Keep in mind that every run you get three lives. Dying once won’t end the run prematurely, but don’t make a habit of it.

There are several different choices when it comes to run. No matter which run type you choose every one will end in a boss fight, so you’ll want to be prepared. There are:

Chaos Levels work similar to Mayhem levels in Borderlands 3 and gives you the option to make future runs harder the higher you climb up them with vastly improved chances for amazing loot. Be warned that you will also end up fighting enemies above the max level.

How to Unlock the Chaos Chamber Game Mode

After beating the final story mission you will begin the quest Epilogue which will take you all over Brighthoof to learn about newly unlocked game mechanics.

The end of this quest will take you into Brighthoof castle at the request of Queen Butt Stallion where you will meet with the Dragon Lord. He will run you through a brief and very detailed tutorial and you will be able to take on Chaos Chamber runs whenever you want when you finish.

There’s no magic trickery here, you just want to farm crystals. At the end of each run you get dropped into an area with statues that all correspond to different loot types and have a crystal amount above them that you must spend for a related loot fountain. Crystals do not carry over between runs so your only real choice is to spend them if you’ve got them.

To increase your crystal gain, there are a few things you can do. First, extended runs are your friend. That boost to crystals along with there being several more fights to obtain them is key.

Next, follow the side objective if you enter a chamber with one. This can be something like defending a statue or destroying one, but you will get more crystals at the end of the chamber as a reward for completing it, so they’re definitely worth your time.

Third, go with the harder curse when choosing with the Dragon Lord. I know, this one seems to go against the idea of fast runs, but you often get a large percentage increase to crystals gained making it worth the extra grind.

Also, when choosing a chamber portal (more on these below), make it elite when you have enough crystals to do so. Yes, 50 crystals is a steep asking price and every subsequent time it costs more crystals, but you get better rewards.

Do stick to only doing it when you have enough spare crystals, though. Nothing is worse than getting to the end and being a little short of a full reward from the loot statue of your choice. To this end, also avoid using any of the blessings around the chambers, while they might be inexpensive, they can easily add up and drain your wallet.

After clearing a Chamber you will have a choice between two portals. Similar to other roguelikes, you are choosing how the next Chamber will end.

The Dragon Lord portal icon means when you clear the next Chamber you will have the Dragon Lord appear and give you a choice between two curses.

As mentioned above, if you are wanting the best possible crystal gain, go with the harder of the two curses they will have their difficulty marked in brackets before the name of the curse.

This portal will end with Queen Butt Stallion giving you one random blessing of her queenly choice. These blessings don’t affect your crystal gain rate and will be pulled from the possible pool of blessings/perks you see around the Chambers.

These can make your runs easier, as the blessing will be free. However, this the portal we’d recommend least because of the better choices there are in terms of crystal gain for the end of the run.

As you might figure, this portal ends with you breaking massive dice that give a sizeable loot rewards and some crystals.

If you’re in this for the loot, these are the Chambers you will want to go to just about every time. For even better end results, make sure to turn these into Elite encounters.

If you want to maximize your crystal gain, you should go for these and Dragon Lord portals. These crystal chest portals work similar to the loot chest ones, except the dice at the end will spit out a good amount of crystals.

The amount can easily be augmented by taking the harder curses mentioned above.

There you have it, everything you need to know about the Chaos Chamber including the best rewards and which portals to choose.

The Chaos Chamber is also a really great place to farm up your Myth Ranks which we have an in-depth explanation for over here.