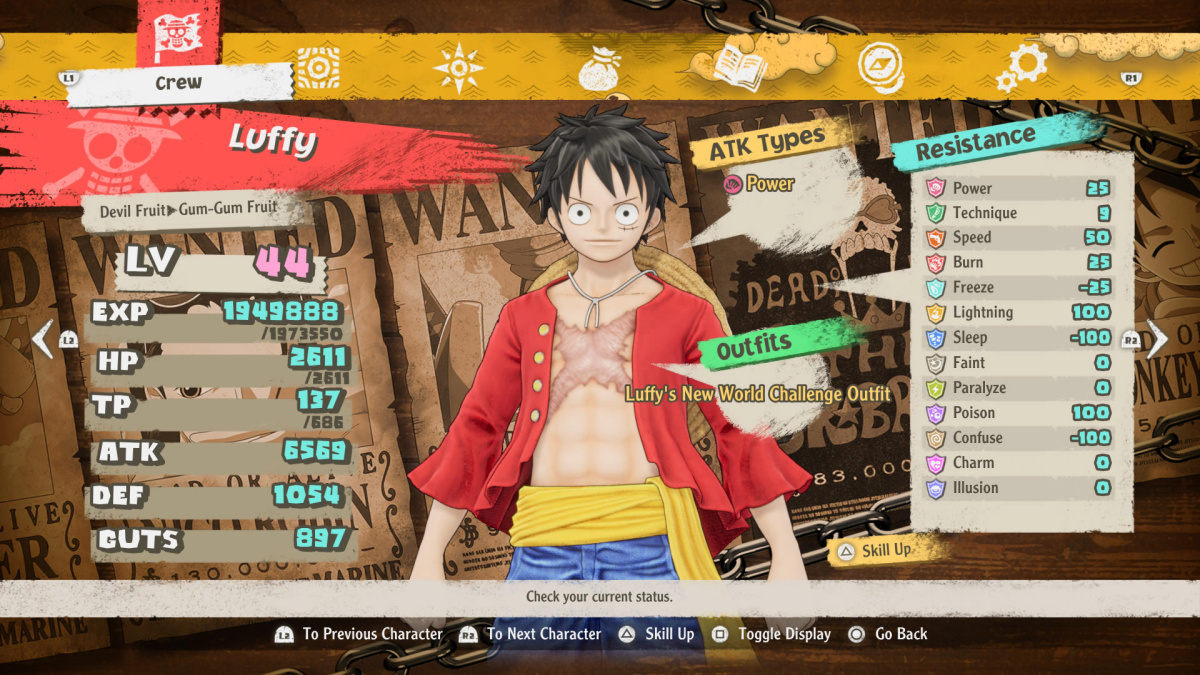 One Piece Odyssey’s RPG mechanics are surprisingly well-done, offering a level of depth one would expect from series that are more well-established in the genre. There are accessories to craft and equip, attack types and weaknesses to learn, and even stats which players will need to wrap their head around. That last point might be giving you trouble though, and as such, we’re here to help with a guide covering all the stats in One Piece Odyssey, what they mean and how to improve them.

Every Stat Type in One Piece Odyssey Explained

In addition to your HP and TP — which determine your total health and points which can be used to activate abilities respectively — there are three other stat types which affect how strong your party members are in One Piece Odyssey. These stats are Attack, Defense, and Guts.

Defense, meanwhile, affects how much damage your party members suffer from basic attacks. A higher defense means a character will take less damage, while a lower defense means they’d take more damage. This remains true even when an enemy attacks your party with an attack type they might be weak to, and can mean the difference between staying on their feet or being knocked for a loop.

What Is Guts in One Piece Odyssey? Explained

Then, there’s Guts. Unlike Defense, this stat determines how much damage you suffer from enemy skill attacks. These are the special moves which have names tied to them, and which typically deal heavier damage than a normal attack. The higher a character’s Guts is, the better they’ll hold up against special attacks and the more likely they’ll be to survive.

For example, during a boss fight, your version of Luffy might take a high amount of damage from Crocodile’s normal attacks but far less damage from his special techniques. This would be due to Luffy’s Guts stat being higher than their defense, resulting in his resistance against flashier blows.

How to Improve and Increase Stats Fast

With all this in mind, you’re likely curious about whether or not there are fast and easy ways to increase stats in One Piece Odyssey.

Luckily, the answer is yes. In addition to leveling up your characters for stat increases, you can also equip them with accessories to give their stats a huge boost. Different accessories grant different stat bonuses, and you can combine the effects of common accessories with rarer ones for a boosted effect once Robin gains the Fuse ability.

Using Food cooked by Sanji is also a great option, albeit a temporary one. During battle, food can be used just like any other item and typically grants additional stat bonuses for a few turns. This can boost your stats by a large percentage, resulting in your party members gaining an insane amount of Attack, Defense or Guts at key moments.

That’s all there is to know about all the stats in One Piece Odyssey. For more on the game, check out our guides on who the best characters are, all the playable characters, and how to level up fast. We’ve likewise got tons of articles related to the larger One Piece series, which can be viewed down below.