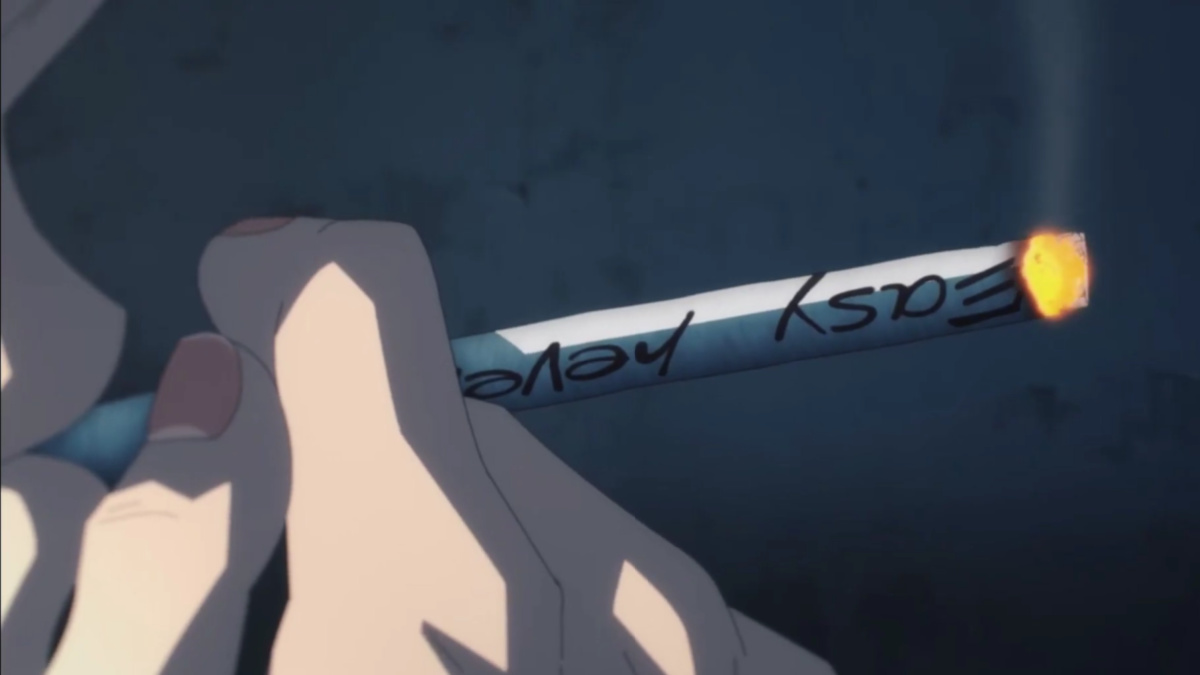 While the finale of the Chainsaw Man anime and manga’s Katana Man arc is undeniably epic, it’s also filled with some moments that are left up to interpretation. For proof, look no further than the moment where the Ghost Devil hands Aki a cigarette with the message “Easy revenge” written on it, followed by Aki chopping off its head with zero resistance. Even after taking some time to ponder its meaning, you’ve likely been left wondering: What does Easy Revenge in the Cigarette in Chainsaw Man mean?

Fortunately, you’ve come to the right place, as we’ve constructed this guide to answer that very question.

What Does the Easy Revenge Cigarette Mean in Chainsaw Man? Explained

While it’s still never been explicitly stated what the Easy Revenge cigarette means in Chainsaw Man, one can infer that it was a message from Himeno to Aki that was meant to help him defeat Akane.

Himeno likely hatched the plan to give it to him after the Ghost Devil was consumed by the Snake Devil. Realizing that Akane would try to release the Ghost Devil in exchange for it serving her at a later point, she figured out that she could remind Aki of the Ghost Devil’s weakness at this point and give him the upper hand.

She also knew that a cigarette would be the perfect way to let Aki know what she was plotting. Because smoking was an intimate shared activity between them, the chances were incredibly high that one would immediately make him think of her and start to put the pieces together.

As for what the phrase “Easy revenge” means, it’s pretty simple: So long as Aki remembered that the Ghost Devil would be immobile if he wasn’t afraid of it, he’d be able to kill it with no issue. This would, in turn, leave Akane defenseless, as summoning the Ghost Devil would come at a high cost which would make summoning other Devils difficult.

How Did the Ghost Devil Get the Easy Revenge Cigarette?

With all of this said though, you might now have another question: How did the Ghost Devil get the “Easy revenge” cigarette in Chainsaw Man?

Fortunately, there’s a clear answer to this: Himeno continued to exert some influence over at least part of the Ghost Devil after her death. This is shown by the scene where one of the Ghost Devil’s chopped-off hands pulls Denji’s rip cord to trigger his transformation into Chainsaw Man, despite this not benefitting the Ghost Devil in any way. Based on this, it’s likely that Himeno was able to control that same hand and make it pick up one of her cigarettes, which she then scrawled her message onto.

This would also explain why the Ghost Devil stopped attacking Aki before he received Himeno’s message. She was likely able to control it just enough so that she could give Aki her message via one of its hands, thus ensuring he’d know what to do and that he would survive his final battle.

Hopefully this cleared up what Easy Revenge on the cigarette in Chainsaw Man means. For more on the series, check out our other guides on topics like what the city mouse vs. country mouse story means, who Quanxi is, and what the alley door means. We’ve also got plenty of other articles related to the series, which you can peruse down below.