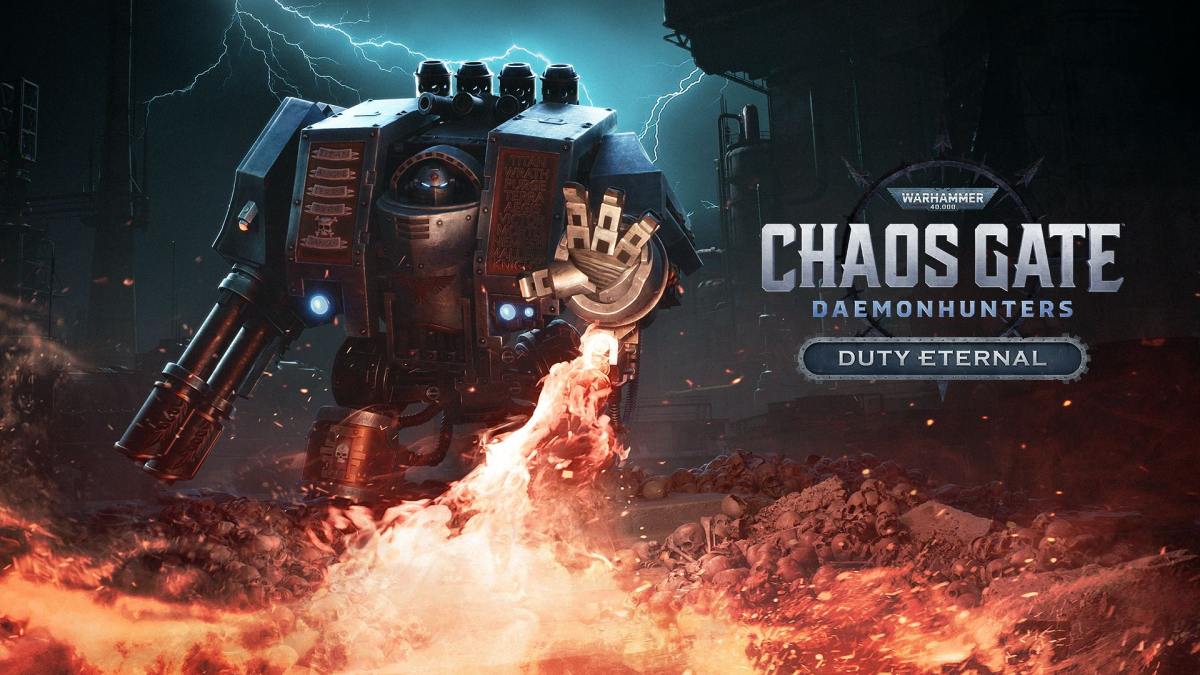 With the release of the Duty Eternal DLC, Warhammer 40,000: Chaos Gate – Daemonhunters takes another Dreadnought-sized step ahead into the grimdark future of the 41st millennium.

Not only the DLC adds the Venerable Dreadnought in a series of dedicated Technophage missions, but it also comes with Techmarines, servitors, and a whole new starship to do your bidding.

In order to learn more about the game and the latest expansion, Twinfinite spoke with Noah Decter-Jackson, Head of Studio and Game Director at Complex Games.

Giuseppe: At the moment, the game is available only for PC. Is there any chance that it could be ported to consoles at some point?

Noah Decter-Jackson: We have nothing to share on Chaos Gate – Daemonhunters for other platforms.

Giuseppe: I know you’ve just released your first DLC, but are you already planning for more?

Noah Decter-Jackson: We’re committed to continuing to support the game, but we have nothing to share on new DLC.

Giuseppe: I think I can understand why the Venerable Dreadnought is limited only to Genophage
Missions, as this allows leaving the balance of the original missions untouched. But are you
considering ways to possibly extend its use down the line?

Noah Decter-Jackson: It’s a good question! We are definitely keeping an open mind as to how that fifth Unit Slot could be used in the future, though we have nothing to share right now on that front.

Giuseppe: Was it challenging to create missions that felt balanced while adding the considerable power of a Dreadnought into the mix?

Noah Decter-Jackson: The challenge we had for the Venerable Dreadnought from the start was that it repeatedly came back from playtesting as being too ‘tame’ for its scale and size, so that forced us to
ramp up its capabilities and power substantially, then push the difficulty of the Technophage Missions to match. You want this awesome hulking unit to feel powerful, but you don’t want to get it to just
make things a cakewalk. So it’s a careful balancing act.

Giuseppe: This is more of a broad question. The original Chaos Gate focused on a conflict between
Ultramarines and World Bearers. What led to the decision to shift to Grey Knights and Death
Guard?

Noah Decter-Jackson: We were mainly interested in creating something new that we felt the core existing fanbase would still find appealing and scratch that tactics and strategic management itch.
We started developing the core concept for Warhammer 40,000: Chaos Gate – Daemonhunters over five years ago with the idea of building a campaign around dealing with an ‘unconventional’ enemy, one you couldn’t defeat with firepower alone.

The idea of a galactic plague felt like a concept that people could immediately pick up and understand while also naturally translating into the fictional universe of 40K through the Chaotic influence of Nurgle. So that’s how the whole concept of the Bloom took shape.

The Grey Knights emerged from there quite naturally as the right counter-point to that threat….That’s not to say we don’t like creating disgusting pus-monsters, though. They’re definitely a bonus.

Giuseppe: The game has been out for a while, and I think it’s very safe to say that it’s one of the most
well-received Warhammer 40,000 games since Dawn of War. How does it feel to have avoided what many consider a curse for the franchise, which has been plagued by many mediocre games?

Noah Decter-Jackson: We stepped into building this game, challenging ourselves to create a world with systems that felt authentic to our little segment of the 40K universe. We’re honestly just gratified that the
fan and general audience response has been so positive.

Giuseppe: Is there any feedback from the community that you’ve taken on board and are implementing, perhaps at the same time as the release of the DLC?

Noah Decter-Jackson: We definitely keep an eye on comments and feedback as best as we can, though the first priority is often dealing with any weird issues or bugs that folks report and run into. I always
want to make sure that wherever players are facing ‘friction’ in the game experience, that isn’t just tackling the intended challenge that we try to smooth those spiky areas over a bit.

At the same time, we have a vision of where we want to take these systems and this world,
so we try and balance player feedback with that in mind.

Giuseppe: The game as it is now (and the DLC appears to be no exception) definitely encourages
aggressive plays, but there are many tactical RPG fans that enjoy playing defensively. Have
you been considering how you could cater to that style more, perhaps with future DLCs?

Noah Decter-Jackson: Not really – designing a tactical RPG around the Grey Knights’ capabilities means that playing offensively makes the most sense. That said, you’ll find with Duty Eternal that there are some
new tools that give you different options than what you had before, and we’ll continue to try and expand the player’s tactical toolkit to keep the mechanics fresh.

Noah Decter-Jackson: We’re just really excited to get Duty Eternal out the door finally and show the fans what we’ve been up to. I really hope that everyone enjoys it and continues to support the game!

Warhammer 40,000: Chaos Gate – Daemonhunters is currently available for PC, and you can read our review to learn how good it is.