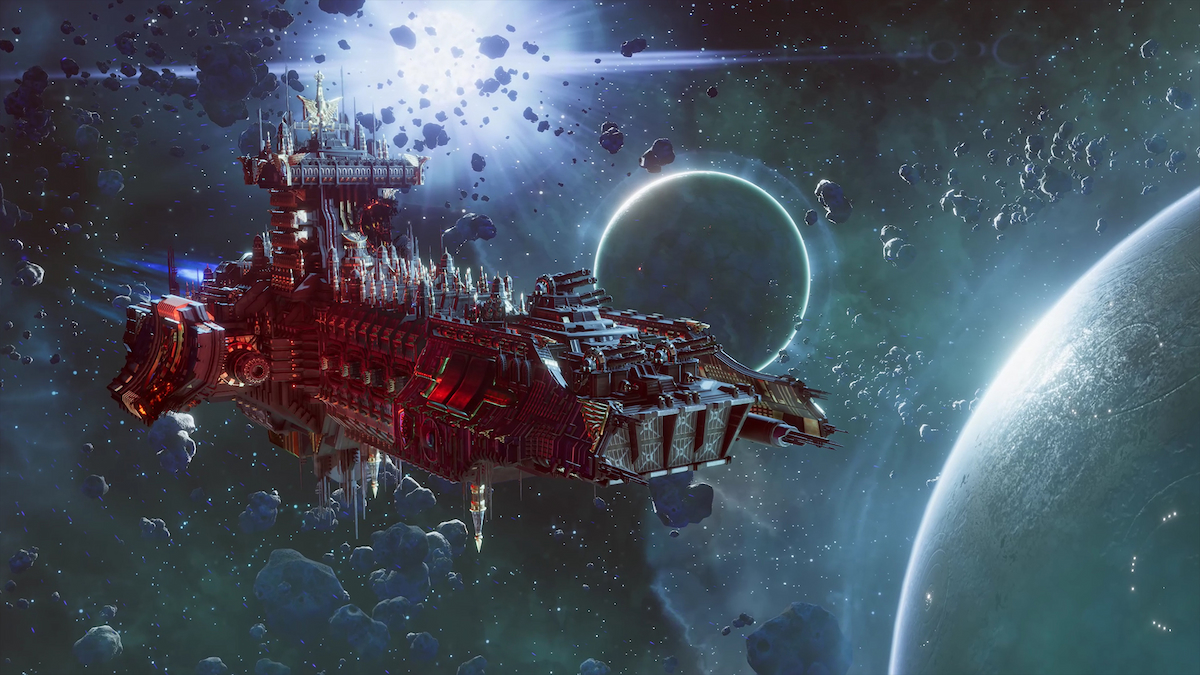 Warhammer 40k: Chaos Gate – Daemonhunters, from developer Complex Games, is a triumphant entry into a genre already in the midst of a renaissance. And while it stands on the shoulders of giants, it is a must-play title in its own right for both tactical gamers and proponents of Warhammer 40k alike.

Set in the grim darkness of the far future, 40k games, unfortunately, have a tendency to be a little hit or miss (and I personally tend towards the fantasy iteration). They either do a disservice to the fantastic lore and universe of the tabletop setting or are let down by poor gameplay or low budget. Daemonhunters, I am glad to say, is an exception and easily the best game I’ve played in the setting, supplanting the excellent earlier entries in the Dawn of War series (which previously held that honor for me).

In Daemonhunters, you command an elite and secretive chapter of Space Marines (the Grey Knights), genetically engineered super-soldiers fanatically devoted to a single task: the eradication of Chaos, and Daemons in particular.

Let’s address the inevitable comparison to the XCOM franchise (of which I am a massive fan) first. It’s true that Daemonhunters is a tactical turn-based strategy game set in a sci-fi universe, like the XCOM series, and that the gameplay shares many similarities at first glance.

In that game, you lead a ragtag unit of soldiers against a technologically superior alien foe, constantly looking for opportunities to even the odds. Ranged combat is rewarded, and expert use of Snipers and the Overwatch ability is almost a requirement on harder difficulties.

From the get-go (and one of the key differentiators between the two), your average Grey Knight is faster, stronger, and many times more deadly than the rank and file cultists and Poxwalkers you will spend the early game pulverizing. Space Marines are the best of the best, and while you can and will be overwhelmed by the sheer number of enemies you will need to contend with, aggressive play is not only encouraged but essential.

In what is perhaps the most epic turn-based tutorial I have ever played, you start the game during the final climactic battle of a crusade against the forces of the Blood God, Khorne. You play as Commander Agravain, who ultimately must sacrifice himself in order to vanquish the Greater Daemon, Erekhul.

Once the game begins proper, you take on the role of the unnamed new Commander of the chapter, and it falls to you to lead your battered battle-brothers back to your homeworld of Titan, to rest and rearm, and to repair your damaged battleship, the Baleful Edict. On route, you are intercepted by an Inquisitor named Vakir, who commands your understrength force to investigate a mysterious plague known only as the Bloom.

From this point on, you become solely responsible for the Baleful Edict and those who serve aboard her. It falls to you to see to her repairs, to arming and leading squads of Grey Knights in battle and dealing with the disagreements that will arise between your councilors and the crew. Very quickly, you will find yourself conducting a single-ship crusade against the pestilential followers of Nurgle, the Plague Lord.

You will spend less time on the strategic layer than you will in tactical combat, but there is still plenty to do. You must assess which planets require intervention, what technologies to research, and what equipment you need to requisition from your superiors back on Titan in order to conduct your war.

It helps, then, that combat during tactical deployments feels incredible. Leading a squad of four Grey Knights, armed to the teeth with massive Force weapons (psychically enhanced swords, hammers, and halberds, to name a few) and wrist-mounted Storm Bolters that spew explosive rounds, you are able to deal death with both hands.

On the battlefield, you engage your foes by using AP (action points) to perform actions, and at a baseline, each character can perform three in a turn (although you can boost that number significantly later on). You can perform any action repeatedly, provided you have AP. So, you could use all three to cover a lot of ground if needed or attack three times if you begin the turn surrounded, or any combination of actions the situation demands. Factor in special abilities and equipment, Overwatch, and your defensive Aegis personal shield, and you have the tools in your arsenal to even the odds.

The focus on melee, and on the Stun system (through which you are able to disable enemies if you hit them enough in a turn) is perhaps where Daemonhunters differs most from XCOM. You get up close and personal with your enemies, and that philosophical difference is hard to overstate. In addition, there are environmental interactions that you can use to turn the tide, such as shoulder charging a pillar, causing it, in turn, to fall and crush your enemies to dust or explosive ordnance that can be ignited with gunfire.

There is also the simple fact that, when firing on an enemy who is not in cover, you cannot miss. The Grey Knights are the best of the already superhuman Space Marines, and they hit what they aim at, another way in which this game differs from traditional XCOM.

Grey Knights are known for their psychic abilities, and each can expend WP (will points) to enhance or alter their abilities, dealing further damage. This, too, leads to further complexity as you must manage a limited resource, but is further complicated by the Warp mechanic.

Daemons are creatures of the Warp, and they feed upon the psychic energy of mortals. Every turn, depending on a variety of factors, the Warp gauge will increase by a percentage. When it is filled, a random effect takes place, all of which are bad news for you. A portal might open, from which will spew a new squad of gibbering horrors, or you may receive a debuff to a particular squad member, or an area of the map might now suddenly be filled with poisonous ichor.

To make things worse, every time you use psychic powers, the rate at which the Warp gauge fills will increase, as the Daemons feed upon the energy used. This adds yet another element of risk/reward to proceedings, and a further element of randomness, which is thematically appropriate (Nurgle is one of the Chaos Gods, after all).

It’s worth noting the difficulty of Daemonhunters, which I found to be shockingly high, and the Warp mechanic is a great driver in that. There are four difficulties to choose from (Merciful, Standard, Ruthless, and Legendary), and a Grand Master setting which functions as Ironman mode (a single save file that automatically overwrites itself after each action, preventing savescumming).

I am a veteran of the strategy genre, and I consider myself a glutton for punishment. After three aborted attempts at Standard difficulty, with Grand Master active, it was with a strange sense of shame that I was forced to restart on Merciful difficulty, and even that was really tough at times (I refused to turn off Grand Master, however).

For comparison, Standard difficulty is billed as analogous to Classic in XCOM, a setting in which I have completed that game many times. I’m not sure if this is a balancing thing, or if I was playing too conservatively, but I could see this being an issue for players brand new to the genre.

There are four base classes available at the start of the game, with four more advanced classes becoming available later on in your campaign. There is a satisfying amount of complexity to building each unit, and two units of the same class can vary wildly. This is not like the binary choice you are presented in XCOM at each rank up, but a skill tree that, quite frankly, has no business being as deep as it is, and is more akin to something you might find in an action-RPG.

In terms of performance, Daemonhunters runs well and looks great, boasting a fitting Gothic aesthetic and art direction that perfectly captures the 40k universe. Special shout out to the sound effects and combat barks; Bolter-fire is suitably meaty, and your Knights will deliver death to their foes with conviction, prayers to the Emperor on their lips.

There is so much more to Daemonhunters that I could go into, like the many varied unit types and their interactions, the climactic boss encounters, or the twists and turns of the game’s narrative, but I think they are better left unsaid, to be experienced fresh. Some of the best moments I had with this game where the “oh, shit” ones, where some hideous abomination or another upset my carefully laid plans, and I was forced to react on the fly.

Suffice it to say though, Warhammer 40k: Chaos Gate – Daemonhunters is a fantastic video game, a game of the year contender, that demands attention in a genre that is now synonymous with XCOM. Daemonhunters’ twist on the formula is unique, and the 40k setting is the perfect backdrop for this kind of game. I look forward to further entries in what I hope is a burgeoning new series, and whatever it is Complex Games works on next.