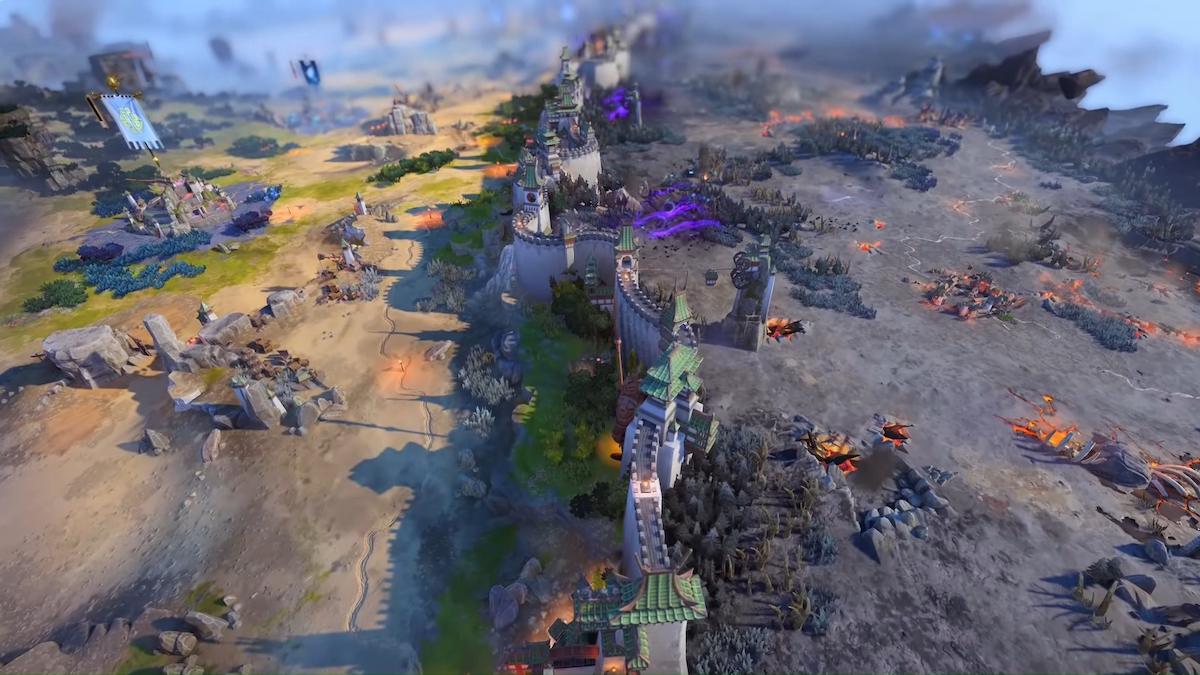 Total War: Warhammer 3 is the definition of an ambitious video game. The third title in a sprawling trilogy taking place in the grim-dark Warhammer universe, the setting is the perfect accompaniment to the grand scale strategy that is synonymous with the Total War franchise.

Released back in February to critical acclaim, Warhammer 3 mostly bore the weight of its lofty expectations. Learning lessons from recent historical titles like A Total War Saga: Troy and the excellent Three Kingdoms, developer Creative Assembly has brought forth a raft of gameplay improvements and innovations from newer titles to the aging Warhammer platform.

The main campaign in Warhammer 3, called the Realm of Chaos, lets players take command of one of the eight playable factions and attempt to stop, or support, the spread of the Chaos gods and their incursion into the mortal realms, in a scenario that is more story-driven than previous entries.

Since its launch, almost three months ago, there has been a substantial balancing patch in the form of Patch 1.1, and various minor adjustments and hotfixes here and there, but little else besides.

Absent are the standard post-launch features fans have come to expect. Warhammer 3’s iteration of the controversial Blood for the Blood God DLC is notably missing, which is somewhat ironic considering Khorne is actually a playable faction this time around.

Just this past week, a roadmap for content updates throughout the rest of 2022 was released, which has led to some consternation (and even some light review bombing of the title’s Steam page, with the title currently rated as Mixed) from fans at the timeline presented by Creative Assembly.

The roadmap highlights some exciting features which faithful fans can look forward to, but the timeline on which they are being presented is a pretty tough pill to swallow. In addition, changes that would be a footnote in a minor patch or hotfix are given top billing as if they were content to be excited about, and in some cases, are issues independent modders from the community have long since solved.

For many, the true draw of Warhammer 3 is a game mode known as Immortal Empires (formerly Mortal Empires) which will combine the maps and playable races from all three games into one unholy strategy behemoth, realizing the ultimate fantasies of both Total War fans, players of the Warhammer Fantasy tabletop game, and me, the gamer at the center of that hyper-specific Venn diagram.

Creative Assembly had announced that Immortal Empires would be coming at a later date after launch, but a specific time frame was not given.

Look, developers have had to face a myriad of challenges in recent years, and I am sympathetic to that.

But as a point of comparison, the Warhammer 2 incarnations of both Mortal Empires (which I remain a huge fan of to this day) and the Blood for the Blood God DLC were released a bare month after launch.

Obviously, Mortal/Immortal Empires are on a vastly different scale from one another, but that fact doesn’t make the wait any less painful.

In the worst-case scenario for Warhammer 3, using the timeline presented by Creative Assembly, players will not have had access to either of those equivalent features (that is, the Blood God DLC or Immortal Empires) for a full seven months.

Even then, Immortal Empires, the game mode that I would argue the majority of players are hanging out for, will only be launching in a beta version, and who knows what kind of state it will be in.

To be entirely fair to Creative Assembly, orchestrating something as vast as Immortal Empires is a herculean task, and I give all credit where it is due.

According to my own accounting, we are talking about a single continuous game map that will contain 78 playable factions, 82 Legendary Lords to choose from, more than 500 units across all factions, and somewhere within the realm of 400 battle maps. And it all needs to be balanced and, you know, work.

At the time of this writing, the most subscribed-to mod on Steam for Warhammer 3 is one that turns off Warhammer 3’s Realm of Chaos mechanics entirely.

I’ve always said, to anyone who would listen, that Total War games are at their best when they provide a sandbox for players to lose themselves in, and Warhammer 3’s Realm of Chaos features a narrative focus that is just diametrically opposed to that philosophy.

That is, perhaps, the reason why more than 82,000 players are subscribed to the aforementioned mod in a game that’s peak player count was just over 166,000 in the month it launched.

In the last 30 days, Warhammer 3 hit a peak of just over 20,000 concurrent players. That’s still an impressive number, but a sharp decline in a game that is designed to be played for years to come.

Steam numbers don’t tell the full story, but this drop-off mirrors my own experience. I’ve put hundreds of hours into most of Creative Assembly’s games in the weeks after launch, and I consider each and every one of those hours to be joyous and well spent. I’ve enjoyed my time with Warhammer 3, but the reality is I spent around 20 hours with the title, and that was back at the start of March.

I’d love to dive back into Warhammer 3 and recreate the storied battles from my tabletop days, trading the poorly-painted plastic models of my Empire army for units rendered in glorious 4K, and animated in stunning detail.

And I will, at some point. I just wish it would be sometime sooner. The framework to the literal game of my childhood dreams is in place, it just needs a little more time in the oven. I’m mixing cooking and construction metaphors now, but you get the idea.

Warhammer 3 is a fantastic game, and I don’t regret my purchase, I just wish I had more reasons to return to it. I can’t imagine a more perfect title to tide me over during the relatively quiet period of game releases we now find ourselves in, it’s just a shame that Creative Assembly’s development timeline didn’t line up a little better.