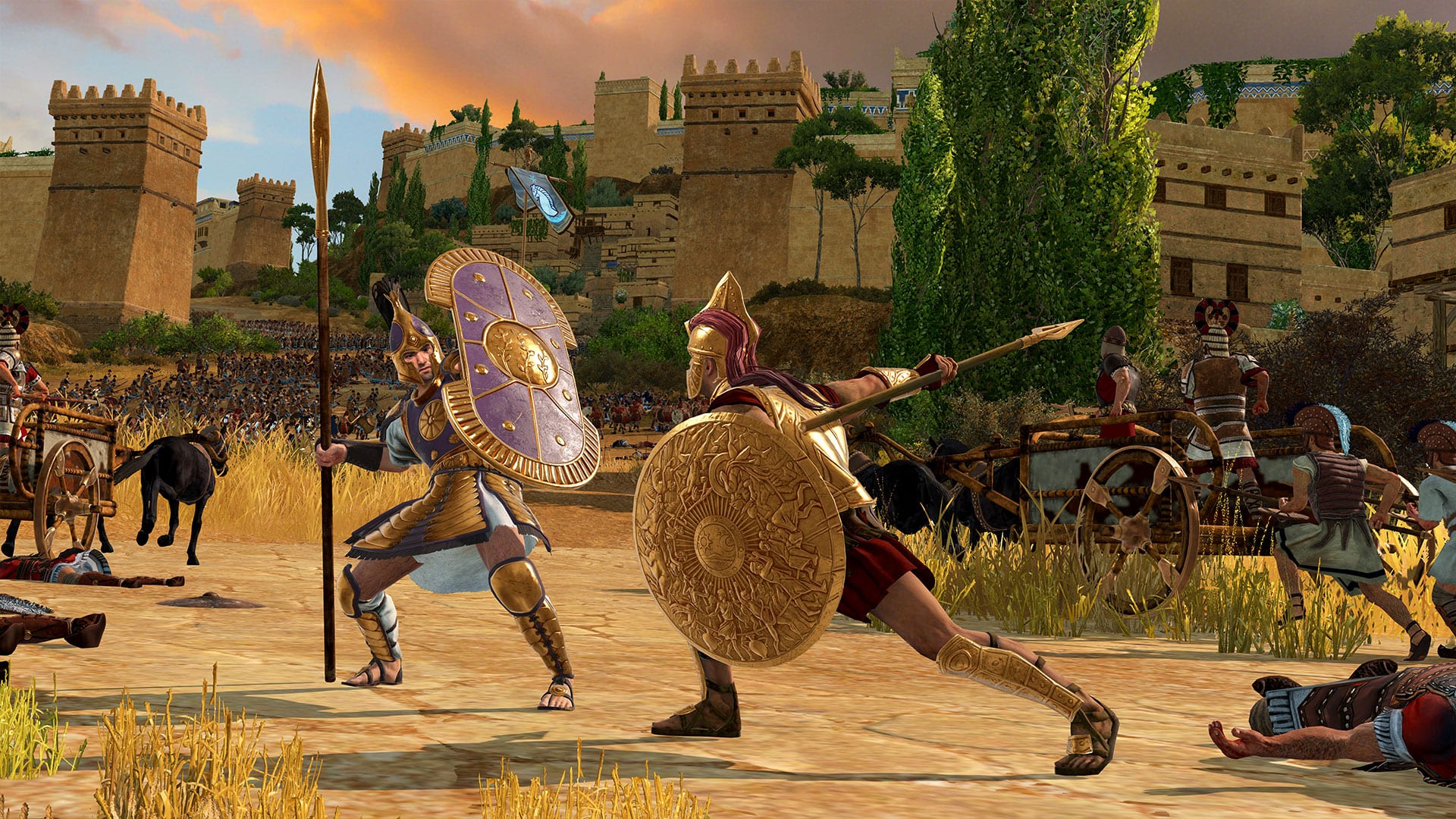 The tragic tale of the Trojan War is one that has been revisited many times over the past three thousand years, but with its latest game Creative Assembly Sofia has made the old feel fresh and exciting once again.

The second in the Saga spinoff series of Creative Assembly’s larger Total War franchise of grand strategy games, Troy, like Thrones of Brittania before it, serves as a testing ground for new ideas and mechanics, set in a more focused epoch. It marks the first full Total War release for Sofia, a subsidiary studio of Creative Assembly proper that had previously worked on DLC for Rome II.

In many ways, Troy is emblematic of the new era the Total War franchise finds itself in. Gone are the days of the buggy and poorly optimized releases like those of Empire and Rome II. Troy, like Three Kingdoms before it, runs like a dream and loads incredibly quickly, and on its highest settings produces scenes of jaw-dropping beauty on a scale unlike anything else in the genre.

With an art style inspired by the clay amphorae so synonymous with the period, the campaign map, in particular, is arresting. It’s a work of art in its own right.

The fog of war, for example, is represented by papyrus, with it burning to embers as you reveal more of the enormous campaign map, equal in size to the largest present in any of the mainline series. It stretches from Illyria to Syria, and the serene waters of the Mediterranean belie the conflict that takes place atop them.

Battle maps are diverse, and special attention has been given to sieges and choke points in particular. In the Bronze Age, siege weaponry was quite primitive, and so taking a walled settlement is particularly tough. But the cities and fortresses themselves are well designed and varied and change depending on the level of the settlement in question.

You will see some repeats, with there being a few maps in particular that come up a little more often than I would have liked. Some of the field battles, particularly in the more mountainous areas of Greece, heavily favor one side over the other and can be exploited as such. But this is a minor nitpick, really.

The tale of the Trojan War is full of myths and legends, of gods and goddesses, and heroes and villains. Therefore, as in Three Kingdoms, it’s a perfect bridge between the historical settings of older games and the more fantastic world of Creative Assembly’s Warhammer franchise.

This is represented in-game by the leaders of the playable factions and their generals, like Achilles and Paris, being capable of superhuman feats, engaging hundreds of soldiers at a time, and singlehandedly changing the course of a battle.

There are a variety of archetypes available, and each can be used to shape and tailor a given army to the desired purpose as they progress down their own individualized skill trees. Achilles, for example, is a master of single combat and can decimate anyone foolish enough to face him, while Paris’ skill set is designed to boost the effectiveness of his factions archers, to truly fearsome levels.

There are eight playable factions and each has its own unique playstyle, units, buildings, and mechanics. A single playthrough can take dozens of hours, so there is an immense and meaningful amount of replay value on offer here, with no two games ever playing out in the same fashion.

Each faction has a distinct flavor and feels vastly different from each other. As an example, Achilles leads his fearsome Myrmidons, elite medium infantry that are both fast and deadly, and will fight to the last man for their lord. Players will need to manage Achilles’ famously temperamental mood swings, in addition to seeking out and defeating the greatest warriors of the age in order to ensure his name lasts forever.

A campaign as Paris, meanwhile, is more subtle, but no less engaging. Here players must ensure the safety of the beautiful Helen of Troy and make sure that the star-crossed lovers remain in the same geographic area, lest heartbreak, and negative effects for your faction, ensue.

In addition, you must seek to outdo your brother Hector and earn the favor of your father Priam, King of Troy, in order to be named his true successor. Success means confederating both, merging their forces with your own and instantly making you a superpower, and failure means game over.

Perhaps the biggest change to the well established Total War formula is the way infantry performs. Mounted soldiers were almost non-existent in the Bronze Age, and so Creative Assembly Sofia has come up with a fairly ingenious and elegant solution.

Soldiers now have a weight class, with light soldiers moving incredibly fast, and essentially performing the role cavalry does in other games (mopping up fleeing missile troops, and performing flanking actions). Medium infantry forms the core of your army and is versatile, while heavy units are often elite, at the cost of movement speed, availability, and increased upkeep.

It might sound simple, but in effect, it is incredibly nuanced, as the variation in unit types means this is no simple case of rock-paper-scissors. Depending on the weapon carried, the culture from which they originate, and even the ground they fight upon, means light troops are easily capable of defeating heavy, provided your tactics are sound.

A central theme to this iteration of the Trojan War is a grounding of the myths and legends that have endured over the millennia, and this is reflected in some pretty cool ways. You can recruit giants and centaurs, for example, but they are just huge hairy dudes and barbarian horse riders respectively. They serve to add further to the diversity of units on offer, becoming available to any faction that holds the specific regions from which they hail.

New, too, is the addition of multiple resources, five in total, all of which must be carefully managed, and are often in short supply. In past games, you really only had to worry about food and gold, but in Troy, you need to secure bronze to equip your elite soldiers with, and stone and wood to upgrade cities and construct new buildings. It adds an extra level of complexity to an already complex game, but in a way that is interesting and not overwhelming.

Troy takes big swings, and connects in almost every instance. It is bold and inventive, but true to the groundwork of the franchise that fans have come to know and love over the past two decades.

About the highest praise I can give A Total War Saga: Troy is to suggest that if you told me it had been developed by Creative Assembly proper prior to having played it, I would absolutely have believed you. It meets the same level of exceptional quality as any mainline entry in the series.

As a first foray, it is an incredibly impressive effort from Creative Asselby Sofia, a team that has done incredible justice to one of the most important tales of the ancient world.