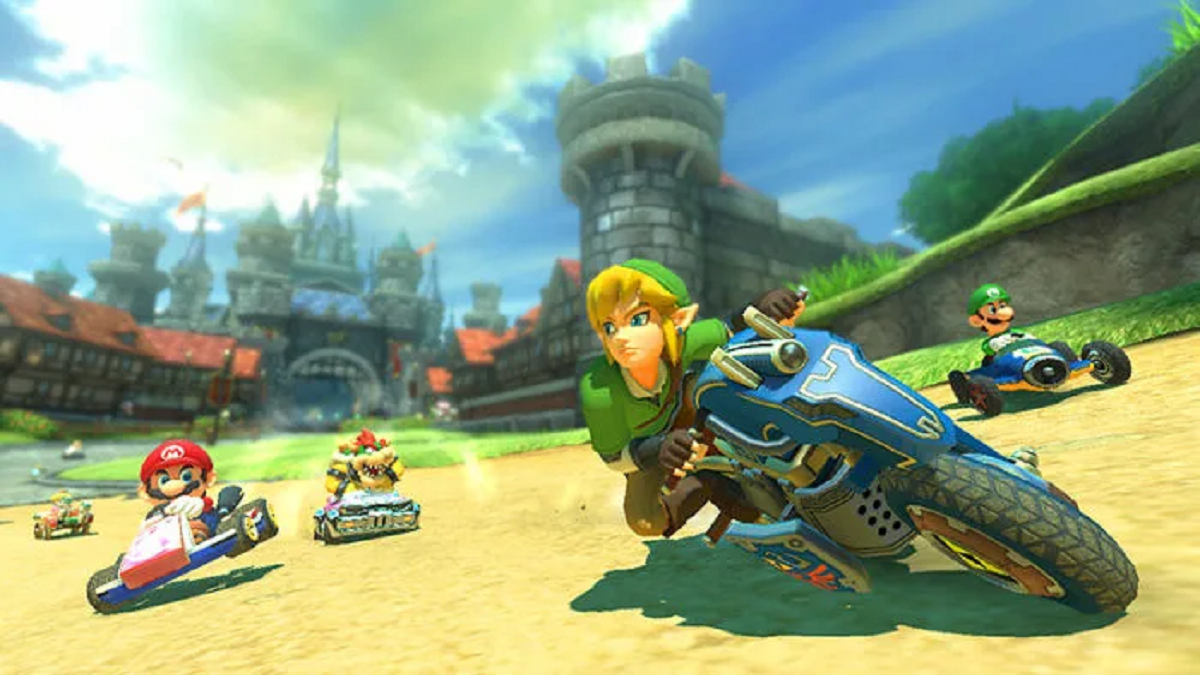 Mario Kart is the classic split-screen multiplayer game, and the Switch version of 8 is comfortably the best option. It includes all the DLC tracks and characters, adds the ability to hold an additional item, and looks better than ever before. Simply chuck a couple of friends a joy-con and start racing!

Don’t be fooled by the cooking theme, jolly music, or lighthearted visuals; there’re few games that are as stressful as those from the Overcooked series. You can have up to four other chefs work together to slice and fry your way to success, trying to get every dish out a quickly as possible. Just be prepared to shout at your friends and family when things go wrong.

Rocket League’s initial influx of attention came when it was a free PS Plus game on PS4. Now, however, with it coming to other consoles and developing an esports following of its own, it’s still hugely popular. Flying through the air is difficult to master, but the ‘soccer with cars’ premise is easy for anyone to get to grips with, and the competent bots make it easy to play with just three players.

Minecraft is the game that offers whatever experience you’re after. Whether you want to join up with your friends to create the structures of your dreams, or explore the vast worlds while trying to survive the attacks of the enemies that lurk around every corner, the choice is up to you. Also, now that the game has been available for a few years, there is plenty of content for you to enjoy.

Splatoon 2 is certainly one of the best and most popular multiplayer games available for the Nintendo Switch. However, you’ll have to play online. You’ll then have to meet up in-game to be part of a single team, working together to take out the other inklings and cover the floor with your team’s ink. It’s a unique take on the team-based shooter, but makes for great fun.

Death Squared is all about teamwork. With each of you controlling a colored block, you need to solve a selection of puzzles by moving around, activating switches, and dodging traps. To have to think before every movement, or face having to start the level again, makes communication absolutely vital.

FIFA 21 may not be the same single-player experience on Switch as it is on other consoles, with the likes of FUT Champs strangely missing, but it’s still the same in multiplayer modes. Even with just one joy-con, you can join some friends on the couch for some competitive action, or you can jump online to play with guests in most of the fan favorite modes.

Rayman Legends  has some of the best platforming in the series and the art style is beautiful, but best of all, almost all of it can be played with some friends. Jump around, collect lums, and reach the end of the level. It’s all quite simple, but a lot of fun. If you’re after a challenge, though, try the music levels at the end of the game. They’re tough, but really well-designed. There’s also a fun little soccer side game that you can jump into with some friends.

Kirby Star Allies is a charming platformer, but it’s even more fun when playing in co-op. Only one of the up to four players can actually be Kirby, with the others acting as helpers who are able to do things such as turn enemies to your side. It’s easy to get to grips with, cute, original, and works well with three players.

ARMS is a very unique fighting game. You can pick any of the fighters, each with unique styles and abilities, and take part in tactical fights that require quick thinking and precise timing. You can jump into 2v2 matches – with one of the fighters being controlled by the computer if you only have three players – and work together to take down the opposing team.

Lovers in a Dangerous Spacetime sees you and up to three other players take control of a ship as it travels through space. One of you controls the weapons, another the shield, and someone’s responsible for the engines. Your roles can change, but you have to keep in contact with each other to ensure that you’re heading in the right direction. Survival is key, but that won’t be possible without great teamwork.

There’re a lot of different multiplayer modes in Puyo Puyo Tetris, but they’re all based around the usual simple gameplay of Tetris. Modes like Party Mode introduces items that help you beat other players’ scores, but it’s still all about speed and quick thinking to ensure that you get the high score. It may be simple, but Puyo Puyo Tetris is a great alternate to standard Tetris.

We all missed the likes of NBA Jam; or at least, we did until NBA Playgrounds released, anyway. With caricatured players, insane special moves, and fast-paced gameplay, it feels just like the arcade style games of old. You can also jump onto the court with friends to play 2v2, using your favorite players in intense competition.

Most LEGO games that are based on a specific franchise are great fun in multiplayer, and Marvel Superheroes 2 is no different. You can pick your favorite Marvel hero, put together an unusual dream team, and head out to take on enemies and collect every brick you can find. It’s also a great choice if you’re looking for something that’s easy and lighthearted to play with kids.

The Jackbox Party Pack titles that are now available feature a whole host of fun party games. The best thing is that you can all play from your phone. Whether it be answering questions, solving puzzles, or hampering other players, you can all do so from devices that are connected to your Switch. It makes the already great minigames more accessible for gamers that are deeply invested in gaming.

The latest entry in the acclaimed life simulation series, Animal Crossing: New Horizons is a blast to play alongside two of your friends. You can all meet up at one of each other’s islands and engage in any number of adventures. Gather resources to craft new objects, pose for a group photo inside an unsettling abode, or even lounge around and enjoy each other’s company. The choice is yours.

It’s no secret that Nintendo’s Super Smash Bros. series is a go-to for multiplayer fun, and that won’t change if you have three players looking to tussle. All of you can duke it out from the same console or through online play, using your video game character of choice to lay the hurt down on your treasured companions.

Up for some side-scrolling beat ’em up action to enjoy with two pals? Look no further than Streets of Rage 4, the latest entry in the lauded series. You can each choose from four potential playable characters and then work together to overcome the latest threat to besiege the streets that are rightfully yours. It’s a simple, yet effective way for your trio to bond with a quality gaming experience.

What’s better than jumping your way through one of the best Mario titles in recent memory? Why, jumping through it with two friends of course! In all seriousness though, Super Mario 3D World + Bowser’s Fury has plenty of content to keep you and your pals busy. You can work together to overcome each stage with grace, or sabotage each other’s platforming endeavors in some hilariously frustrating ways.

It’s dangerous to go hunting alone in Monster Hunter Rise, so it’s a good thing that you can easily call in two of your closest allies for help. Though it’s limited to online multiplayer, this game can easily facilitate a play session with three people, allowing you all to hunt monsters without anyone feeling left out.

Scott Pilgrim vs. The World: The Game – Complete Edition

If you’re a fan of beat-em-ups (especially also if you’re a fan of Scott Pilgrim) you’ll want to pick up the complete edition of the acclaimed Scott Pilgrim vs. The World game. Re-released on Switch, the Complete Edition not only features 3+ player action, but also includes all of the DLC content released over the years.

The classic beat-em-up was re-released on the Switch recently and has been improved so it looks its absolute best running on the Switch. Although, to be honest, the art style is kind of timeless anyway. Regardless, you can team up with 3+ players and hack and slash your way through an irreverent and zany medieval world, choosing from a number of different Knights with various playstyles and advantages.

Wii Sports was an iconic game of the generation, arguably its decade. It combined the inclusivity of a handful of sports and allowed you to play them out in your living room or bedroom with friends or family. Nintendo Switch Sports manages to bring that magic back again with a larger selection of sports and improved motion controls to ensure every flick of your wrist is accurately reflected in-game.

If you’re looking for a fun party game to play with your friends, Nintendo Switch Sports should be a must-buy.

Prefer your kart racing games with a Final Fantasy twist instead of Mario… and Chocobos instead of karts? Well, have we got some good news for you, as the surprise Final Fantasy spin-off racer is actually surprisingly good!

While Chocobo GP’s single-player offering has a story for players push through, its multiplayer allows for up to eight players to play together in a race online, or up to four-player split-screen multiplayer. The tracks are fun, there’s a good amount of variety in the Chocobos available, and the weapons make for frantic Final Fantasy racing fun!