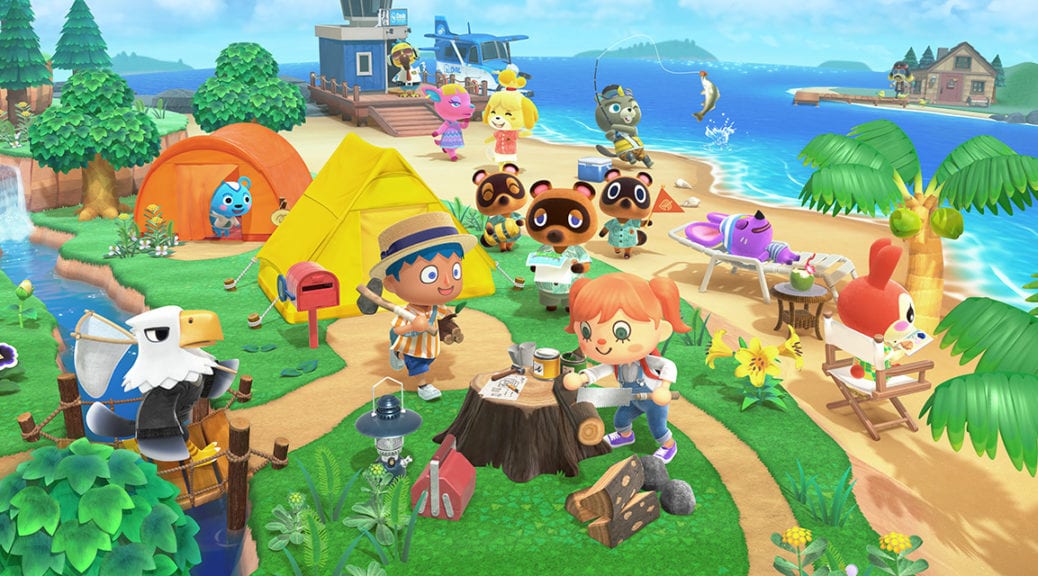 Animal Crossing is unlike most other video games because it follows a real-time clock and calendar. It is meant to be played for the course of a year in order to fully appreciate everything it has to offer. That being said, after only one week with the game, I can confidently say that New Horizons is the most wonderful mix of innovation and familiarity, and it couldn’t have come at a better time.

After seven years of waiting, the newest entry in the series takes natural steps forward in ways I didn’t know were needed and with very few shortcomings. At the time, New Leaf felt like the definitive Animal Crossing experience, yet New Horizons clears that high bar.

If you’re not familiar with the series, you play as a human who has decided to move to an island as part of the Nook Deserted Island Getaway Package. You, along with two animals, start a brand new life with nothing but a tent and the clothes off your back.

The game is exactly what you make of it. With no direct objective, it’s up to the player to form and pursue his or her own goals. Sure, the enterprising Tom Nook might nudge at you to pay off your house loans and upgrade community buildings, but all of that is technically optional.

For players who value collecting, there’s a wide variety of wildlife to catch and donate to an exquisite museum. For players who love burning a hole in their pocket, there’s a daily rotation of clothes and furniture to spend hard-earned bells on. For players who want to express their creativity, there are features such as a photo mode and a pattern designer.

Personally, I’m a big fan of customization, so one of my favorite additions is the ability to place furniture and other items outside. This was previously limited to Public Works Projects, which were random, expensive, and limited in scope.

In older games in the series, I never understood the inclusion of certain items that were very clearly outdoor items but couldn’t be placed outside. What was I going to do with a picnic table or swimming pool inside my living room? New Horizons finally allows you to take full advantage of every item in the game and stretch the limits of your imagination.

And with such a wide variety of items available in the game, those limits are truly endless. Crafting, another feature introduced in New Horizons, adds a fresh layer to giving personality to an island. Players can craft items they want instead of solely following a monotonous routine of checking the shops daily and praying to find an item that matches the aesthetic of their island.

Yet even after all of these additions and improvements, there is a huge sense of familiarity in New Horizons, and nothing caught me by surprise in a negative way. Mechanics that were perfected from the start of the series, such as fishing and bug catching, remain unchanged.

The gameplay loop feels like it should get boring quickly, but it doesn’t. The changing time of day, weather, and seasons bring new creatures to encounter as well as physical changes to the landscape. Activities that should feel like a chore, like pulling weeds and redecorating my house, are actually fun.

A lot of that has to do with Nook Miles, a new form of currency introduced in New Horizons. Initially, I was hesitant about the game introducing a second type of money on top of bells, but the two are balanced very well.

In fact, Nook Miles are an absolute game changer and will keep you playing for longer. In a way, they act as achievements, and the tasks to earn them give me something new to do that maybe I normally might not try. For example, some Nook Mile tasks have you sending letters to residents, assessing fossils, or catching a certain type of fish.

The rewards you can exchange for Nook Miles are enticing. Aside from items and upgrades, the most fun thing to spend them on are the island tours. For 2,000 Nook Miles, you can visit a smaller deserted island nearby for a chance to find new items like foreign fruit or flowers.

The island tours are a bit of a gamble, and while they are sometimes a frustrating waste of Nook Miles, they keep me hooked on the grind to go back again and again in hopes of finding rare creatures and a friendly villager to invite to live on my island.

I never ran out of things to do while playing, yet it was important that I took the time to stop and appreciate my in-game surroundings. One morning, I noticed the wind blowing heavily through the leaves of the cherry trees, and about an hour later, the downpour began.

The island changed: the animals walked around in their rain gear instead of their usual attire. The physics of running through rained-on sand looked and sounded different than it did when dry. A rainbow later emerged above the horizon. These details immersed me completely.

Newcomers to the Animal Crossing series might not understand the hook of New Horizons immediately. The game is meant to be played at a slow pace, but the first few days seem to have a slow start even compared to previous titles in the franchise, and new players might feel confused about what they could be doing while waiting for buildings to be constructed.

In fact, it feels as though the game does not even properly begin until the Town Hall building is constructed, which happens approximately one week into the game, assuming every main objective given by Tom Nook is completed daily.

This is when the Nook Stop terminal starts allowing many more exciting projects to be crafted, special vendors like Mabel the tailor and Kicks the shoe salesman start visiting, and the hourly music begins (which is something I cannot begin to explain why it is left out for the beginning portion of the game).

There are a few other questionable omissions besides the hourly music. There’s no touch screen compatibility when making patterns, even though the touch screen is used elsewhere in the game. Also, while breakable tools like shovels and nets are only a minor annoyance, it’s made worse by the fact that there are no unbreakable tools in the late-game to look forward to.

The online experience, while in many ways is very good, just barely misses the mark. It is far too shallow compared to the multiplayer mini-games offered in New Leaf’s island tours; players must make their own fun together, which can be difficult to do when the host’s actions are limited while visitors are on the island.

Also, while it is fantastic that the game allows eight friends to play on an island at once, Nintendo’s online infrastructure makes it difficult to enjoy it. Every player on the island must be interrupted to sit through a loading screen when each new person arrives; this isn’t so bad for the first one or two friends, but after the seventh, it can take as long as 10-15 minutes to get an entire group together. And you better hope that the final friend has a strong connection, because if they disconnect, so does everyone else.

To many players, it will be the little things that put the biggest smiles on their faces. A shooting star late at night. A balloon floating through the air with a gift attached. The quirky animal facts told by Blathers, the museum curator. A surprise birthday party with a piñata and cupcakes. The wisps of an airplane trail in the sky after a friend has left the island.

These little things are the heart of what makes up the Animal Crossing experience. Everyone will play the game in his or her own way, and that’s the beauty of the game. Sure, the first few days might be slow for many people’s tastes. But each day in the game brings new surprises that beg players to come back for more. And with so many new customization options, each player’s island is truly and unmistakably his or her own.

New Horizons is the definitive Animal Crossing experience—that much is clear after a relatively short amount of time spent with it. And with the promise of future holiday updates, it’s guaranteed that fans both new and old will return to their islands again and again for many years to come.