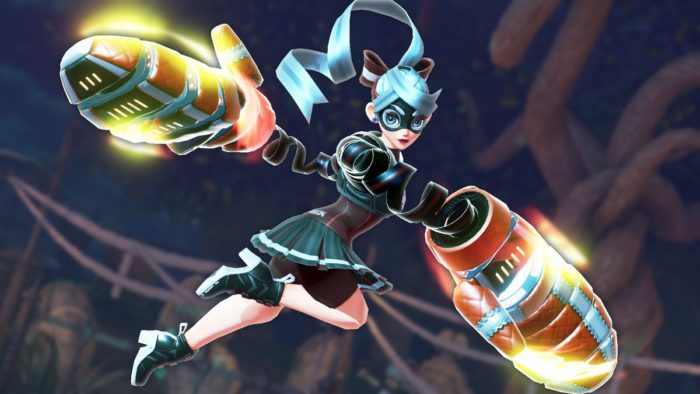 My favorite thing about ARMS is that it’s a motion control fighting game that works. Motion controls have been a thing in the gaming market for quite some time now, and the results can be a little hit-or-miss at times. Playing Just Dance on Xbox with a Kinect can be a nightmare when the camera randomly stops reading your inputs. Even Wii Boxing had its unglamorous moments where the Wiimotes just wouldn’t register your movements properly. Not so with ARMS.

The bulk of my play experience with ARMS was spent with motion controls. The Joy-Cons fit snugly in each hand (though I suggest using wrist straps if you have them), and everything is simple. Press the R button to jump, L to dash, and you swing your arms out to punch. As I noted in my preview, aside from instances where the Joy-Cons were unable to properly read my quicker movements, the game runs like a dream in this configuration. You can feel the weight of each punch – a feature that becomes a lot more prominent when you start experimenting with the different Arms available in the game.

You can play with standard controls, of course, but I never used them unless I got the urge to continue Grand Prix on the go, or if I’d just exhausted myself from swinging my arms around much too wildly.

All of this action is boxed into a loud and colorful package, brimming with so much charm and personality. From the game’s impossibly catchy theme song (whoa-oh-oh-oh-whoa-oh-oh-oh-whoa-oaaaaa) to the bright color palettes of each fighter’s springy limbs, it’s hard not to fall in love with ARMS’s style.

The game’s single-player Grand Prix mode does a great job of walking you through the basic mechanics, but not much else. There are seven difficulty levels to choose from, and starting from the bottom is always a good way to get accustomed to the game’s rhythm and flow. Aside from letting you play through a series of single-player matches with any character you choose, though, there isn’t much else to see in Grand Prix. The game puts you through ten matches with other characters on the roster, and then rewards you with coins that you can use to unlock more Arms for individual fighters. If you’re looking for any sort of story-related content, you’re just not going to find it in ARMS. 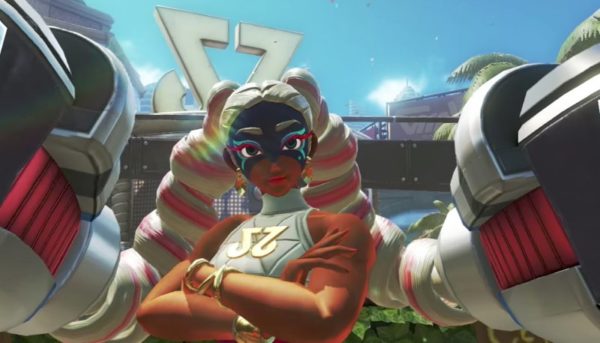 Grand Prix mode is fine, for the most part, but I did find myself getting annoyed at some of the variety modes that get pushed in for a couple of matches during the tournament. Every time you play Grand Prix, two out of the ten matches will force you to engage in a Party mode fight with your opponent. These rotate between Skillshot, V-Ball, and Hoops. It’s during these variety matches that the AI starts to feel a little unfair and inconsistent.

Skillshot places you and your opponent on opposite ends of the arena. A series of targets will pop up between you two. You’ll have to knock down more targets and rack up a higher score than your opponent in order to win. It’s not that hard to win Skillshot matches, but it can be incredibly frustrating when the AI decides to target your character for the entirety of the match while ignoring the targets. Then you’ll lose and restart the round, except this time, the AI is a complete pushover and can’t hit any of the targets you’re aiming for.

V-Ball is even worse, and is hands down the most awful and pointless Party mode currently available in ARMS. It’s essentially a 1v1 volleyball match where you and your opponent have to punch a large ball to opposing sides of the court. Once the ball touches the ground, it explodes, and your opponent scores a point. Maneuvering with the ball can be extremely frustrating, especially if you’re stuck with a character whom you haven’t unlocked any new Arms for yet. I was unlucky enough to get a V-Ball match with Helix in Grand Prix, and none of his three default Arms were quick enough to match the swift strikes of the opposing Ninjara. On higher difficulties, the AI will consistently spin the ball in the air before spiking it straight down to earn a point. It’s also often impossible to predict how far the ball will land, adding even more frustration to the infuriating necessity of having to go through this match in Grand Prix mode. 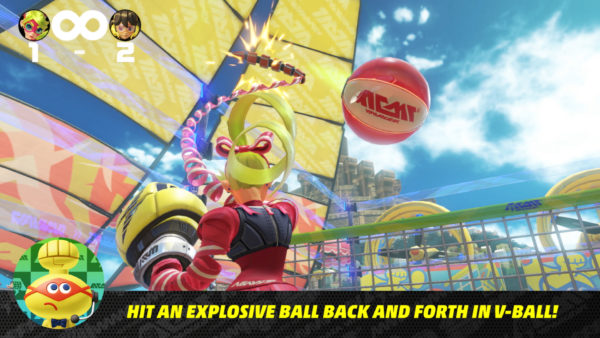 V-Ball doesn’t push or test your fighting skills in any meaningful way, and it boggles my mind as to why it had to be shoehorned into Grand Prix. Hoops is the least offending mode by far, but I do wish the Grand Prix tournaments were reserved strictly for traditional 1v1 matches. After all, we have Versus and Party for the rest of those more casual modes.

Questionable modes aside, ARMS does do a fantastic job with some of its stage designs. Every character has a stage unique to them, and you can use their layouts to your advantage. Ribbon Girl’s concert arena is full of platforms that rise and fall, while Master Mummy’s arena has a breakable pedestal in the middle which reveals a trampoline when destroyed. The stage designs definitely add a lot of variety and shake-ups to your matches, and it’s a ton of fun to make use of the environments to get an edge over your opponent.

Not to mention, the characters are all equipped with their own unique abilities as well. Ninjara disappears after an air dodge, while Min Min can perform a flying kick to deflect punches and throws. Every character will eventually be able to access all the Arms available in the game, but the characters are still very distinct from one another, and it’ll take a lot of experimenting to finally find a character with a loadout that’s suitable for your play style. In my preview, I mentioned that I wasn’t sure if ARMS would stand a chance in a competitive fighting scene, and I’m still not 100% on that concept. But after experimenting with a ton of different loadouts and characters, and taking them through multiple Grand Prix tournaments and online matches, I can safely report that there’s a lot more depth to this game than you might initially think. You can’t perform insane juggles and combos like you’d be able to in more traditional fighting games like Tekken or Street Fighter, but ARMS makes it easy for you to fake out your opponents with bait punches before trapping them with a Dragon laser beam on your other hand. ARMS is all about careful positioning and timing, and some online matches can get particularly intense as players wait for the other to make that crucial first move.

Speaking of online play, I found that my matches were largely smooth, with very little noticeable lag. I was afraid that the motion controls wouldn’t hold up quite as well online, but to my pleasant surprise, they did. Everything felt just as responsive as they did in single-player matches. I wish there was some sort of voting system available in Party lobbies so that players could participate in the game modes they wanted (also to avoid the dreaded V-Ball mode), but that’s a pretty minor gripe in the grand scheme of things.

ARMS also offers local multiplayer where up to four people can share a screen while fighting each other. I definitely don’t recommend playing with three other people when your Switch is in tabletop mode, but otherwise, it’s a fantastic party game to play when you have friends over. The motion controls just make the whole experience that much more enjoyable. Aside from Skillshot, V-Ball (ugh), and Hoops, there are also 2v2 tag team matches and a Battle Royale mode where everyone can just go nuts on each other. And for the more serious players who really want to get into it, there are also online Ranked matches where you can test your skills against other equally serious players. You’ll be given a rank which increases as you secure more wins, and it’ll go down if you lose too many. 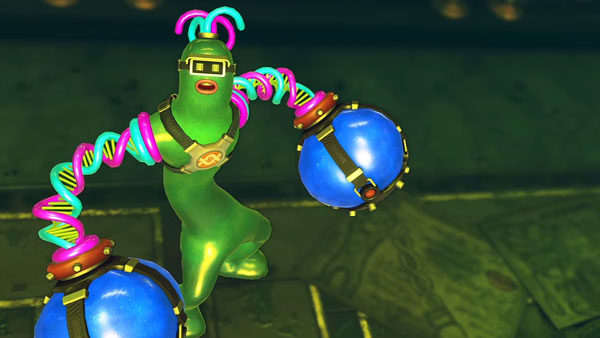 As someone who initially scoffed at the idea of a motion control fighting game featuring characters with extendable limbs, I found myself drawn to ARMS’ aesthetics and the surprising amount of customization and depth it had to offer. It’s satisfyingly easy to get to grips with, and it’ll provide hours upon hours of motion control enjoyment to those who just want a fun game they can play with other people (whether online or offline), or even just as a game that they can use for daily exercise, which is what I’ve chosen to do as well. Competitive players will appreciate the levels of strategy available in the game, and with Nintendo promising to add more characters and unlockable Arms in the future, it’s always possible that game tactics could even evolve over time.

ARMS might not exude that same ‘hardcore’ draw that other fighting games have, but it’s the very epitome of the well-worn phrase, “Easy to pick up, hard to master.” There’s something for everyone here, and it’s certainly a unique gem of a game that Switch owners would be remiss to pass up on.