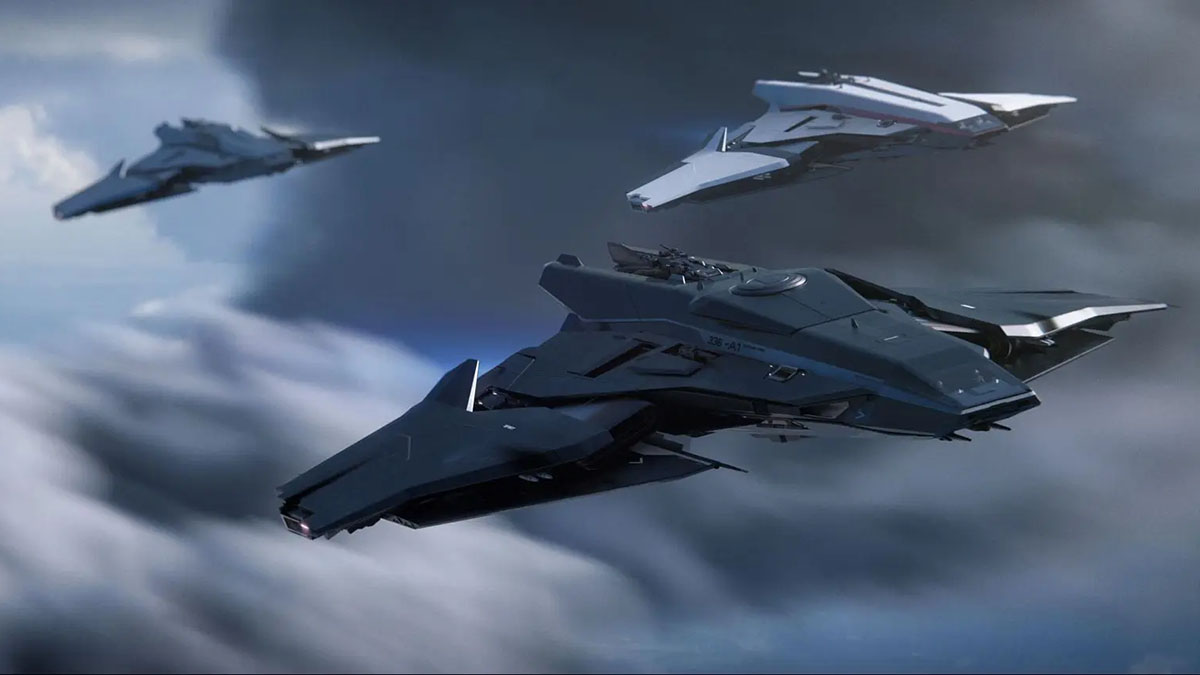 Today Star Citizen developer Cloud Imperium Games hosted CitizenCon 2952, and showcased a look at the content and features coming to the game with version alpha 4.0 and more

We start with a work-in-progress look at the upcoming Pyro system presented by senior environment artist Maximilian Keilich.

We start with planet Pyro 1, characterized by the fact that it gets consistently hit by solar flares.

We then get to see Pyro 2, which is more colorful compared to the planet closest to the sun.

Another look focuses on Pyro 3, which features a more lively nature and beautiful moss.

Pyro 4 looks even more organic and natural, but it also has a very experimental biome with spectacular and massive rock formations. It also includes an extremely large crater.

Pyro 5c comes with a massive landmark, a massive streak of obsidian that can be seen from space.

Pyro 6 has its own blue ocean and more impressive environments.

The segment ends with another look at the coolest places on the various planets. You can watch it below.

Next, is an in-depth look at investigation missions that prompt players to use their brains and play detective, solving a mystery from little bits and clues.

The next segment showcases brand-new and massive corporate underground facilities that players will be able to infiltrate, fight in, and explore.

They will have several levels and areas, and they will present plenty of different gameplay opportunities.

Another segment focuses on changes coming to the flight dynamics, which will give a much different variation in gameplay roles to different ships.

We also hear about the differences between different classes of ships, light, medium, and heavy fighters, racing, interceptors, bombers, and more.

One of the main challenges is speed, but developers can’t simply slow ships down all the time. Luckily, the team claims that they have finally found a working solution.

SCM reduces the speed to between 200 and 300 meters-per-second (with some additional margin using boost), and arms shields, guns, and missiles. Quantum Drive isn’t available.

QCM unlocks the maximum velocity the ship can reach, and provides a new mode named Quantum Boost that works on a straight line. The disadvantage is that the capacitor system is not available. Shields, guns, countermeasures, and vector thrusters are disabled.

We then get to take a look at the work being done to renew Lorville, the oldest city created for Star Citizen.

The most important factor is likely the fact that players will finally be able to fly with much fewer restrictions around the city, going as low as possible into canyons and trenches.

There will also be higher-detail areas around landing pads, allowing players to access interior areas.

The next segment is dedicated to another theme that has been in the works for quite a while, ship resource management.

Quite importantly, this will also make multi-crew gameplay much more relevant.

You can see a prototype of the system in action below.

Another segment was dedicated to upcoming ships, starting with the newly-revealed two-seater Crusader Spirit.

We then get to see the Drake Corsair exploration shop, which is nearing release.

Next, is the Greycat STV which is actually coming today and is a cool little buggy to explore on the ground. It’s also built from the ground up to be a good racing vehicle.

We also hear about a large mining ship for which players will be able to vote the manufacturer between RSI, Argo, and MISC.

We then take a look at outlaw outposts, both in space and on the planetary surface.

This is rather appropriate considering that Pyro is supposed to be a den of scum and villainy.

The livestream was concluded by founder and creative director Chris Roberts himself alongside Squadron 42 game director Richard Tyrer.

They talked about how a lot of the work being done on Squadron 42 (which is the upcoming star-studded cinematic single-player campaign in development for the game) also applies to the persistent universe.

Tryer and Roberts mentioned that one of the things that need to be improved is the interaction with the environment. Squadron 42 has a massive amount of physical puzzles and interaction on a level that hasn’t been seen in a first-person shooter. That’s why the system needs to be easier to use and the clunkiness needs to be removed.

The team is currently working on it. The player shouldn’t need to go into a separate cursor mode to interact with items. It needs to become effortless.

Another system in the works is a quick ping that will let you highlight everything around you that you can interact with. The same system lets you scan a wider area by holding down the button, but will give away your location to enemies that have the same system (including players).

You can see both modes in action in the Squadron 42 videos here and here (you’ll need to click on the link since I can’t embed Twitch here and they have not uploaded this segment on YouTube), including the new interaction system. If you press F, it does the default action. If you hold F, it’ll bring up the interact mode with additional actions. Players will also be able to change the default action to whatever they want.

Next, we get to see work on traversal created for Squadron 42 (and eventually it’ll also come to the persistent universe) on a test map with a bit of a surprise at the end.

The next clip showcases a fundamental change to 0-gravity EVA. Interestingly, in the persistent universe, not all suits will have an EVA pack, so you’ll have to work your way around by pushing, pulling, and grabbing in a systemic way.

The next video showcases a gravlev cargo pod that can be pushed around and loaded onto a ship.

Speaking of ships, we take a look at how the new scan will work.

Next is a look at the new minimap.

We also get to see the new AI system in action including investigation and combat.

We hear about skills including physical attributes (strength, agility, endurance, and fitness), and techniques. These will appear both in Squadron 42 and Star Citizen’s persistent universe. There are multiple different ways to improve them.

An example of technique is takedowns. The more you do, the better you get, unlocking different and more effective animations. Other examples are hand-to-hand skills and traversal abilities.

Roberts then showcased a complete redo of the mobiGlas, the first iteration of which is working on Squadron 42.

We also get the news about the brand new Community Hub, which is live right now.

In other Star Citizen news, the crowdfunding total just passed $502 million and it’s currently sitting on 502,801,465.

The number of registered accounts has also just passed 4.1 million, having reached 4,109,974 at the moment of this writing. Earlier today we learned that about 1.7 million of these actually purchased the game, alongside an update from Chris Roberts himself.